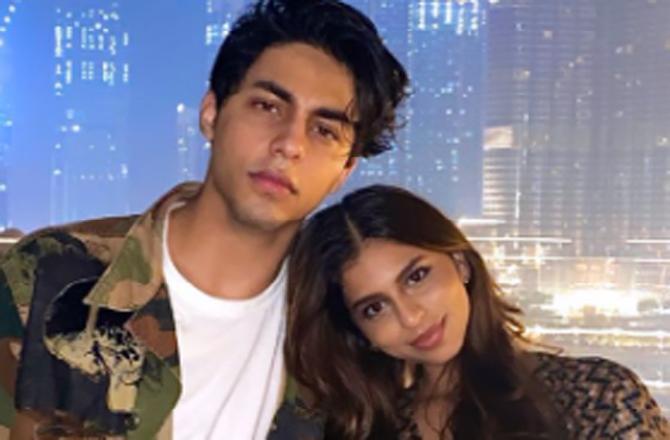 Shah Rukh Khan’s son Aryan Khan celebrates his 22nd birthday today on November 12 and on this special occasion, younger sister Suhana Khan had something special for her brother. She took to her Instagram account to wish him with an adorable picture of the duo.

In the picture, we could see the siblings pose against the backdrop of the Dubai city and it seems the picture was taken during their stay there during the IPL. She called Aryan her bestie, have a look at the post right here:

Gauri Khan also took to her Instagram account and shared a picture of her three children to wish the eldest on his 22nd birthday, have a look right here:

Earlier this month on the 2nd, the family had also celebrated Shah Rukh Khan’s birthday. SRK enjoyed the view of the Burj Khalifa along with his daughter Suhana, son AbRam, niece Alia Chhiba and a family friend Manavi Gaur.

Khan literally lit up the Burj Khalifa with his life’s work. Suhana, cousin Alia Chhiba, and Manavi Gaur posed for the camera on the occasion in their party best.

Also Read: Suhana Khan Shares Aryan And AbRam’s Pictures As She Wishes Them On Raksha Bandhan!

Suhana Khan had recently shared a post on social media, speaking about facing ‘colourism’ since she was young. Her post read, “There’s a lot going on right now and this is one of the issues we need to fix!! this isn’t just about me, it’s about every young girl/boy who has grown up feeling inferior for absolutely no reason. Here are just a few of the comments made about my appearance. I’ve been told I’m ugly because of my skin tone, by full grown men and women, since I was 12 years old…”

Aryan Khan is one of the coolest star sons in Bollywood. He’s often spotted holidaying and partying with friends and even family. A lot is being spoken about his big Bollywood debut but nothing has been confirmed yet. What is surely confirmed is that he truly seems to be really handsome.

Also Read: Suhana Khan Shares Aryan And AbRam’s Pictures As She Wishes Them On Raksha Bandhan!