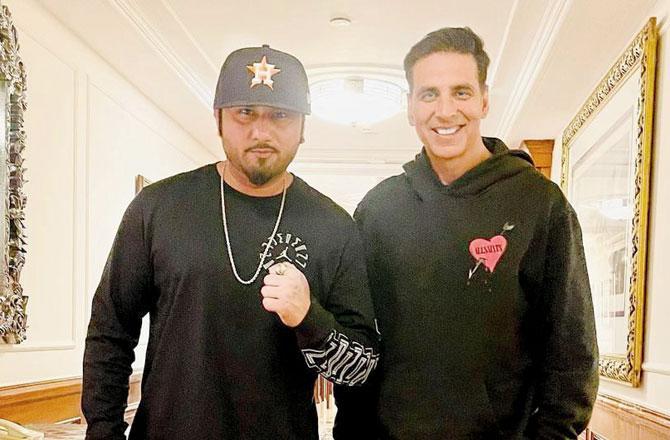 Akshay Kumar and Yo Yo Honey Singh’s collaborations include chartbusters from Boss (2013). Apart from the film’s title song, the rapper also rendered ‘Party All Night’. The Khiladi’s recent meeting with Yo Yo in New Delhi has led to speculation if they will team up again.

Have a look at the picture right here:

There is chatter among Singh’s fans that he needs to score a party number in one of Kumar’s upcoming films. Considering the superstar has several new projects lined up, there can always be room for a track in one of them. Yo Yo describes his meeting with Kumar as “two Dilliwaaley” catching up with each other. We’ll soon know if they talked business too.

Akshay Kumar seems to be one of the busiest actors in the Hindi film industry currently, gearing up for as many as nine films. Sooryavanshi, Bachchan Pandey, Prithviraj, Bell Bottom, Atrangi Re, Raksha Bandhan, another rumoured collaboration with Vashu Bhagnani that will be helmed by Muddassar Aziz, a touted drama with Mission Mangal director Jagan Shakti, and Abhishek Sharma’s Ram Setu.

Talking about Yo Yo Honey Singh, in an interview with Pinkvilla a few months back, he spoke about his depression, the low phase of his career, and how Shah Rukh Khan and Deepika Padukone helped him. Talking about it, Singh said, “It was a terrible phase for me. A lot was going on with my mental well being. I had become an alcoholic as well. I used to not sleep so the disease started growing slowly inside me. It took me 3-4 months to accept that I’m actually not well.”

He added, “It was a dark phase and I would request everyone to not hide it. Especially, an artists is like a mirror for an audience. When we can share every bit of our lives, why not this? People asked me where I had disappeared for two and a half years. So then I felt it’s important to speak up.”

Talking about how Khan and Padukone extended help, this is what the singer had to say, “My family and friends took care of me. In fact, there are many people from the industry who supported me. Shah Rukh bhai and Deepika Padukone helped me and since Deepika has also been through a similar phase, so she shared a Delhi-based doctor’s number with my family for me. They all prayed for me to get well.”

Also Read: Honey Singh On His Song First Kiss: I Thought It Would Be Sweet If A Girl Talks About It, Instead Of A Guy