See Photos: Aamir Khan heads out to watch Suraj Pe Mangal Bhari in a theatre; tweets ‘after so long!’ 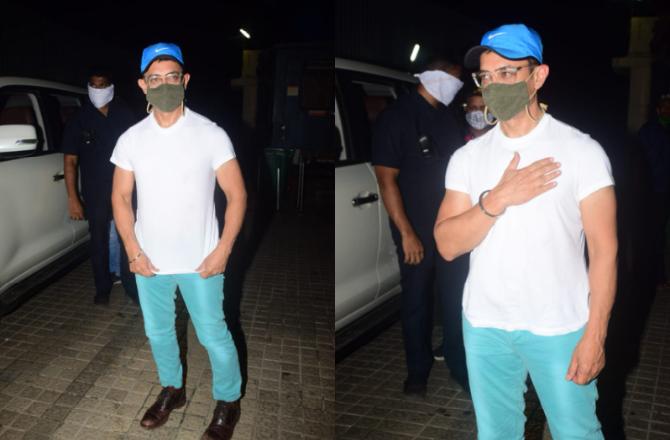 Cinema halls and multiplexes were recently be allowed in Maharashtra, eight months after shutting down due to coronavirus pandemic and the subsequent lockdown. And while many are still skeptical about stepping out and going to the cinema halls, Aamir Khan decided to lead the way.

The actor decided to watch the recently-released film Suraj Pe Mangal Bhari in theatre. Aamir Khan was seen happily posing for the photographers as he made his way towards a popular cinema hall in Juhu, Mumbai.

Dressed in a white t-shirt and aquatic blue pants, Aamir looked happy and cheerful as he posed for the photographers. He completed his outfit with a pair of black shoes and a blue cap.

Abiding by the government directives to prevent the spread of COVID-19, Aamir opted for a grey mask.

The actor also took to his Twitter handle to share the news with his fans. “On my way to see Suraj Pe Mangal Bhari in a Cinema Hall. Really looking forward to the big screen experience, after so long! (sic)”, he wrote on the micro-blogging site. Take a look:

On my way to see Suraj Pe Mangal Bhari in a Cinema Hall. Really looking forward to the big screen experience, after so long !

Starring Fatima Sana Shaikh alongside Diljit Dosanjh and Manoj Bajpayee, Suraj Pe Mangal Bhari is one of the first film to release in cinemas. In an exclusive interview to mid-day, the film’s director Abhishek Sharma said that he was optimistic that people will watch his film in cinemas. “As far as I understand the mood of the country, people have been stuck at home for far too long and want entertainment. So, I hope it will translate into film business,” he stated, adding that cinemas are stringently following the standard operating procedures (SOPs). “The first set of audiences will see how the environment is completely safe, and that, in turn, will boost public morale. I am positive our film will grow through word of mouth.”