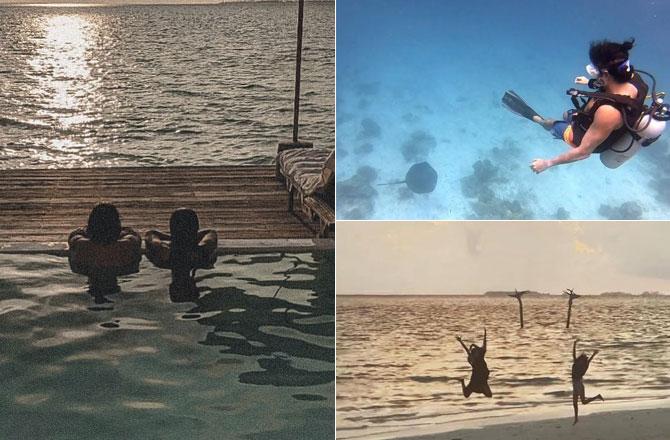 Farhan Akhtar’s Diwali celebrations are bit different this year. The actor is vacationing in the Maldives with girlfriend-actress Shibani Dandekar and his daughter (from his ex-wife Adhuna Bhabani) Akira too accompanied the duo. Both Farhan and Shibani have been sharing posts on social media for fans from the exotic beach locale.

On Sunday, Shibani Dandekar treated her fans with an adorable picture of her with her beau. In the image, the lovebirds can be seen enjoying pool time as they look at the breathtaking view of the azure blue waters of the Indian Ocean. “Happy place @faroutakhtar,” Shibani captioned the image along with a star emoji.

A day ago, Farhan posted a picture of Shibani and his daughter, Akira, jumping in joy on the beaches of Maldives.

Farhan, a week ago, shared two videos that captured him and his daughter Akira scuba diving among the corals in the Maldives. Have a look:

“Feed your soul,” Farhan captioned the Instagram video, featuring him.

Talking about Farhan and Shibani, the duo started dating a couple of years ago. Farhan was previously married to Adhuna with whom he has two daughters.

Meanwhile, on the film front, Farhan will next be seen in Rakeysh Omprakash Mehra’s “Toofaan”, which is a boxing drama. The movie also features Mrunal Thakur.