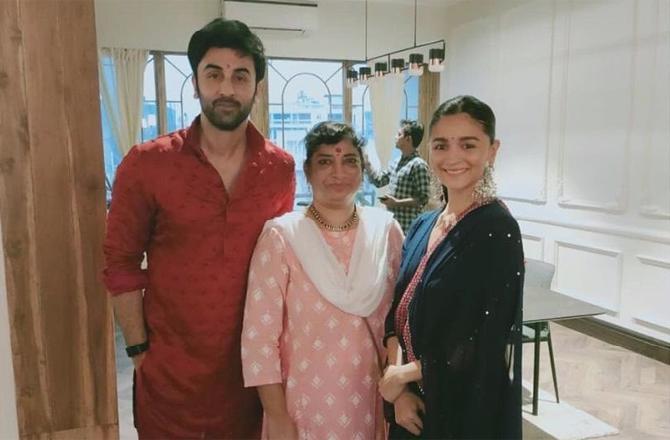 Ranbir Kapoor and Alia Bhatt have been together for a while now and the couple celebrated this year’s Diwali together in a simple yet stylish manner. Both the actors stunned in their traditional avatars and fans are going to love it.

A fan-club of the Rockstar actor took to its Instagram account and shared some pictures where the couple posed for the camera. In one post, Ranbir Kapoor could be seen in a red kurta, have a look right here:

And in another post, Alia Bhatt could be seen in a stunning dark-blue dress and she nailed her Indian attire, have a look right here:

Alia Bhatt and Ranbir Kapoor are coming together for the first time in Ayan Mukerji’s Brahmastra, which also stars Amitabh Bachchan, Nagarjuna, Dimple Kapadia, and Mouni Roy. This film was earlier titled Dragon and was slated to release on Christmas 2016. However, due to the massively mounted scale, the makers needed more time to shape and enhance it.

It was then announced that the drama would come out on Independence Day 2019 and then December 4, 2020, but owning to the lockdown, it seems the release has to wait a little longer. Apart from this film, Ranbir Kapoor also has a film with Luv Ranjan coming up that stars Shraddha Kapoor opposite him, and is also in talks with Sandeep Reddy Vanga for a thriller titled Devil.

She be completed eight years in the Hindi film industry this year. She made her debut with Karan Johar’s Student of The Year in 2012 and managed to strike an impression with her performance in her second film, the Imtiaz Ali directorial, Highway. Success happened in the form of films like 2 States, Humpty Sharma Ki Dulhania, Kapoor & Sons, Udta Punjab, Dear Zindagi, Badrinath Ki Dulhania, Raazi, and Gully Boy.

She has one of the most promising line-up of films among her contemporaries. The first one is Sanjay Leela Bhansali’s Gangubai Kathiawadi, this was supposed to arrive on September 11 but could be postponed.

Also Read: No Wedding On The Cards For Ranbir Kapoor And Alia Bhatt Yet?