Home EntertainmentBollywood See Post: Kalki Koechlin pens a note on how she met and fell in love with Guy Hershberg

See Post: Kalki Koechlin pens a note on how she met and fell in love with Guy Hershberg 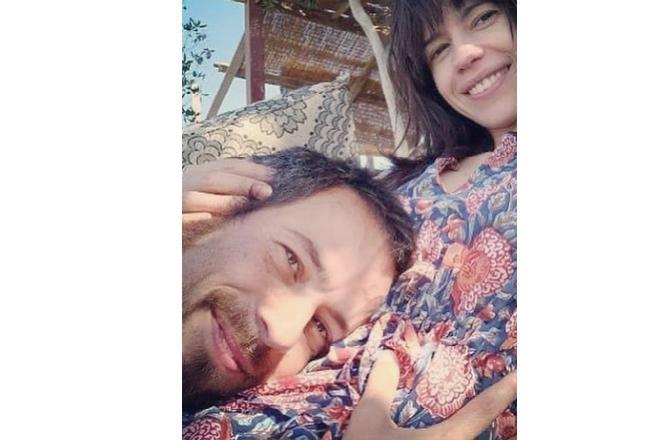 Kalki Koechlin’s Instagram feed is truly one of the loveliest ones. Ever since she has embraced motherhood and begun sharing adorable pictures of her munchkin Sappho, it has made her account all the more adorable. And now, she has penned and poured her heart out and written a long note on how she met her boyfriend Guy Hershberg and ultimately fell in love.

In the picture that she shared, Hershberg could be seen lying on the actress’ lap and this is how she began the note- “We met at a petrol station on the way to the Dead Sea and started a conversation that lasted us several years of togetherness and a baby. We did the Bombay-Jerusalem commute every month for a couple of years where I used to pack fresh coconuts in my suitcase to Israel and he brought kilos of oranges and avocados to India.” [SIC]

She added, “He got me to eat middle-eastern salad for breakfast, I got him to eat three regular meals a day. He learnt to make biryani and I, shakshuka. He took Hindi classes and watched French films, I started online Hebrew classes and learnt to listen to western classical music. He likes his coffee with cardamom, I like my chai with milk and sugar.” [SIC]

Kalki Koechlin and her baby are inseparable. The actress has been regularly sharing pictures of her little toddler on her Instagram handle. Recently, she shared a beautiful picture of her baby. It shows Sappho sitting with a woman under the same umbrella. The two sit an angle such that their side profiles are visible. Sharing it, she wrote: “Under the same umbrella #sangeeta #sappho.” [SIC]

Also Read: Kalki Koechlin And Daughter Sappho Shine Brighter Than The Sun In This Photo!

Kalki Koechlin and her boyfriend Guy Hersberg welcomed Sappo in February 2020. She had previously married filmmaker Anurag Kashyap in 2011 but the two separated after a couple of years. On the work front, Kalki was last seen in the film “Gully Boy” starring Ranveer Singh and Alia Bhatt. The film is directed by Zoya Akhtar. She was also seen in the web-series “Bhram”.

Baby Sappho was both on February 7. Kalki, who turned mother, even shared a long post thanking everyone for her wishes and positive energy. She also gave all the respect to all the women who go through the intense and gruesome experience of birth.

Also Read: Kalki Koechlin: Try To Find Someone You Can Grow Hairy With