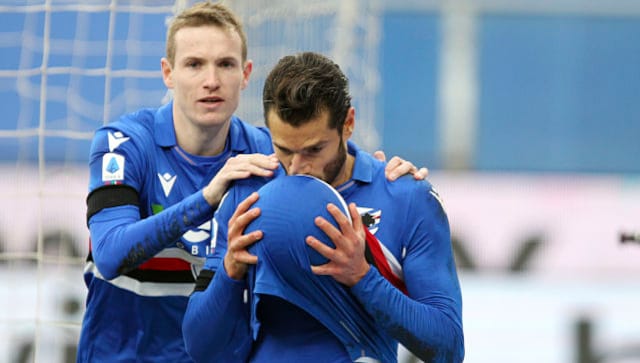 Sampdoria’s Antonio Candreva celebrates after scoring from a penalty against Inter Milan. LaPresse via AP Photo

Milan: Inter Milan missed a chance to move top of Serie A on Wednesday with a 2-1 defeat at Sampdoria which ended their eight-match winning streak.

Alexis Sanchez missed an early penalty for Antonio Conte’s side who were tripped up by goals from former Inter players Antonio Candreva and Keita Balde.

“I’m sorry because I think we deserved something more. Lady Luck was not on our side today,” said Conte after their second league defeat this season after Milan last October.

“It was a bit of a strange match. We found ourselves going from the missed penalty to conceding two goals which clearly created difficulties for us.”

Inter’s leading scorer Romelu Lukaku started on the bench as the forward recovers from a muscular problem.

Sanchez started in the Belgian’s place but missed the chance to give the visitors an early advantage with Emil Audero saving a penalty.

But Candreva made no mistake from the spot after 22 minutes, sending Samir Handanovic the wrong way after Samp were awarded a penalty for a Nicolo Barella handball.

Lukaku came off the bench in place of Roberto Gagliardini with just over an hour gone, two minutes before Stefan de Vrij’s header from a Marcelo Brozovic corner reduced the deficit for the visitors.

Out-of-favour Danish midfielder Christian Eriksen, touted for a move away from Inter, was also brought on for the final 20 minutes in place of Sanchez, with Arturo Vidal coming on late for Barella, having been benched following a woeful performance last weekend.

“I always try to exploit the players according to the situations that arise,” added Conte.

Sampdoria, who had lost their last two games, are 11th, and coach Claudio Ranieri hailed “a very important victory”.

“We lost in Rome and didn’t want to lose again,” he said.

“Inter are a great team, the absence of Lukaku gave us an advantage, because with such a player in front of us we would have suffered more.”

Roma close in on Inter

Third-placed Roma closed the gap on Inter to three points, before the two teams meet next weekend, after scoring three goals in 35 first half minutes in their 3-1 win at bottom side Crotone.

Borja Mayoral bagged a first-half brace with Henrikh Mkhitaryan adding a third from the penalty spot.

Sassuolo beat Genoa 2-1 to move fourth with Atalanta back in the European places with a 3-0 win over Parma.

Josip Ilicic set up Luis Muriel for Atalanta’s first goal in the 15th minute in Bergamo with fellow Colombian Duvan Zapata adding a second shortly after the break and Robin Gosens wrapping up the scoring after an hour.

Lazio won 2-1 against Fiorentina with goals in either half from Felipe Caicedo and Italian international Ciro Immobile.

The Romans are eighth in the table, two points behind Juventus, who will start their clash at the San Siro in seventh, 10 points off league leaders Milan.

Torino grabbed a point in a 1-1 draw at home against Hellas Verona to move out of the relegation zone.

Cagliari stretched their winless run to nine games after falling 2-1 at home to Benevento, who sit 10th.