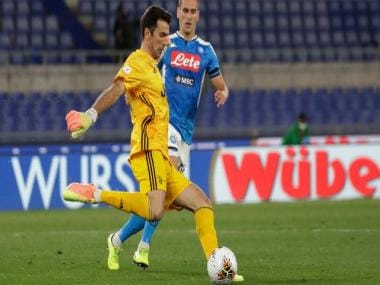 Blasphemy is hardly new in Italian football. But with COVID restrictions keeping fans out there’s a better than ever chance of the pitchside microphones picking up every mutter and curse that escapes the players’ lips, transporting them into the homes of thousands of viewers.

Rome: When Juventus travel across town for the their Easter weekend meeting with local rivals Torino on Saturday, they will do so without veteran goalkeeper Gianluigi Buffon.

The 43-year-old, who is currently the number two keeper at Juve, is suspended… for blasphemy.

In Italian football, players are told to watch their language but occasionally in the heat of the contest, an utterance, sometimes invoking or even chastising the divine, simply slips out.

In empty stadiums, there is a better than ever chance of the pitchside microphones picking up every mutter and curse that escapes the players’ lips, transporting them into the homes of thousands of viewers.

“It’s part of his Tuscan character,” said journalist Ilaria D’Amico, defending her partner Buffon after he uttered a blasphemous phrase while lecturing teammate Manolo Portanova during December’s match with Parma.

“But he’s the first to feel bad when it slips out.”

The legendary goalkeeper was initially handed a 5,000 euro ($5,890) fine but on appeal this week he was suspended for one game, bringing him into line with others who have also fallen foul of their emotions and the sensitive pitchside mics.

This season, bans have also been handed to Roma midfielder Bryan Cristante in December and Lazio winger Manuel Lazzari in February for having used a “blasphemous expression”.

A one-match suspension is the “minimum sanction” provided for by law.

According to the law in Italy, any blasphemy in public — whether it is by a footballer or a banker or a dustman — can be punished with a fine of up to 309 euros.

Former coach Marcello Lippi, who won five Serie A titles with Juve not to mention the 2006 World Cup, blamed his occasional lapses on his roots in Tuscany, where blasphemous phrases are more commonly heard than in other regions of Italy.

But Kaka, who is very religious, would not put up with them when he played for AC Milan, sometimes asking his teammates not to blaspheme.

“It is not God’s fault if they miss a chance or misplace a pass,” he would say.

With a full stadium, these moments would often fly under the radar but the closed-door stadium policy brought about by the COVID-19 pandemic, means the swear words no longer go unnoticed.

“In empty stadiums, we now hear almost everything and it has become much more complicated for referees and officials to close their eyes and ears,” journalist Marco d’Ottavi, who writes for the website Ultimo Uomo (Last Man) and is the author of a detailed report into the history of blasphemy in Serie A, told AFP.

The sanction has “almost always” been there, he says, but the first documented case dates back to a match between Como and Juventus in 1975.

In a tense atmosphere at the end of the match, with Como poised to snatch a spectacular win against Juventus, their captain Claudio Correnti was cautioned for blasphemy. Juve scored from the free-kick to grab a 2-2 draw.

“I would have preferred that we remember what I did as a footballer,” Correnti told local newspaper Corriere di Como 35 years later in 2010.

“It was as if I was the only person ever to have blasphemed in Italy.”

Since then, the regulations have been applied with varying degrees of force.

Sometimes it drifts forgotten to the back burner. At other times it is made a priority, such as in 2010 when Italian Football Federation (FIGC) president Giancarlo Abete, a former Christian Democracy MP, encouraged referees to send players off for blasphemy.

Red cards are a rarity but it did happen in 1992 to Serie B player Marco Pacione, who was given his marching orders just a few minutes into a match for swearing after being fouled.

Usually, the sanction comes after the fact, on the basis of audio and video recordings, as was the case for Buffon.

His defence that when he swore, he did not use the word “Dio” but “zio” (uncle in Italian), was not enough this time for him to escape the ban.

“The problem is if you get caught on the microphone you get sanctioned, but if you don’t, you aren’t,” said d’Ottavi. “It’s not nice to swear on TV, but it doesn’t strike me as being nearly as serious as an act of violence or aggression towards the referee.”

This Italian ‘singularity’ is, however, not yet as strict as in the neighbouring championship of the Vatican, where blasphemy is more heavily sanctioned.

A few years ago, according to the daily paper La Repubblica, a player was suspended for an entire season after “losing his head on an refereeing decision”.

History does not relate whether the late Pope John Paul II, a goalkeeper in his youth in Poland and later a 27-year resident of Vatican City, ever fell foul of the rules.