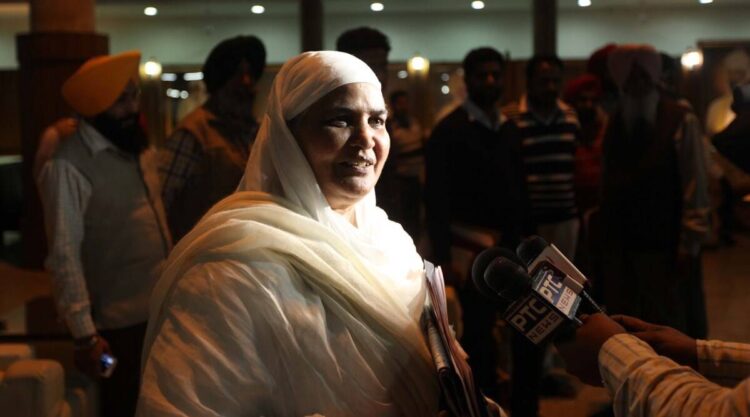 After a meeting with officials of the Amritsar administration with SGPC chief Bibi Jagir Kaur Friday, the SGPC issued an appeal to devotees visiting the Golden Temple to follow Covid appropriate behaviour by wearing masking and maintaining social distancing. The Sikh body, however, made it clear that it will limit its efforts to “motivating people” and will not force anyone to wear mask inside the sanctum sanctorum of the Golden Temple.

After the meeting, Bibi Jagir Kaur said: “The sangat (pilgrims) paying obeisance at Sachkhand Sri Harmandar Sahib should follow the instructions given by the Health Department. The pilgrims should wear masks, use sanitisers, take care of cleanliness and keep a distance between them to prevent the spread of the disease,” said Bibi Jagir Kaur.

We will motivate devotees: SGPC

Despite SGPC’s appeal, only a handful devotees were seen wearing mask or maintaining social distancing inside Golden Temple on Friday.

SGPC chief secretary Harjinder Singh Dhami said, “We have been motivating devotees for last one week. We have installed banners at various places around Golden Temple to inform public about Covid-19 guidelines. We will motivate devotees to follow the instructions.”

He added, “We have asked our Sevadars on duty inside Golden Temple premises to motivate people to wear mask. We will not force mask wearing inside sanctum sanctorum of the Golden Temple.”

On why there is no visible impact of SGPC’s appeal inside Golden Temple, he said, “I am a lawyer at Hoshiarpur and even lawyers here are not wearing mask. It is a phenomena that is difficult to understand. This behaviour is not limited to devotees only and people in general do not wear mask. But SGPC will motivate devotees.”

In fact, SGPC member Kiranjot Kaur had brought it in knowledge of SGPC’s political as well as bureaucratic leadership that devotees were being made to remove their masks inside Golden Temple.

The Indian Express had also reported the allegations levelled by some devotees that they were asked to remove masks inside Golden Temple.

SGPC to send delegation to Maharashtra

A five-member delegation of the SGPC will meet the Maharashtra CM with regards to the action being taken against the Sikh devotees after a clash with the police at Takht Sachkhand Sri Hazur Sahib in Nanded during the Hola Mahalla.

A clash had erupted between some young Sikh devotees and local police on the day of Holi.

SGPC president Bibi Jagir Kaur said, “Hola Mahalla is an important tradition and day for the Sikh community which is celebrated every year with Khalsai Jaho-Jalal (awe-inspiring appreance). The incident took place at Nanded due to the resentment of the Sikh community over the non-approval to hold celebration by the administration.”

She said that the police administration has registered case against about 300 Sikh devotees under severe sections. “It is in this context that the youth are being arrested and subjected to inhumane torture. Children are also being tortured by the police to complete the count, which is highly reprehensible,” said the Bibi Jagir Kaur.

Bibi Jagir Kaur alleged that the ”discrimination being perpetrated by the governments on the occasion of festivals of minority communities in the country is making them feel alienated.”

Bibi Jagir Kaur demanded that the Maharashtra government immediately cancel cases registered against the Sikh pilgrims and for the release of those arrested.

‘Resolution against RSS is in nation’s interest’

Following the passage of resolution against the Rashtriya Swayamsewak Sangh (RSS) during the recent budget session of the SGPC, BJP leader RP Singh had called the move a ”proof of extreme irresponsibility and misunderstanding.’.

In a press statement issued by the SGPC in response to that, additional secretary Sukhdev Singh Bhurakohna said, “Being a Sikh, RP Singh should know that Sikh religion is the upholder of universal communion. Sikh religion considers all human beings to be the children of one Akal Purakh and embraces all by bridging the gap between high-low, caste, rich and poor in the country and society.”

Bhurakohna alleged that the Sikh history, principles and doctrines of Sikhi were being secretly tampered with by the RSS.

He added, “RP Singh should realise that today when the entire Sikh world is celebrating the 400th birth anniversary of Guru Tegh Bahadur Sahib, on such occasion, the resolution passed by the SGPC against RSS is in the interest of the country and the constitution of India. The resolution is in favour of the unity and integrity of the country. Everyone in the country has the right to freedom of religion and to practice their religion.”

RELATED:  Doctors say CDC should warn people the side effects from Covid vaccine shots won't be 'a walk in the park'