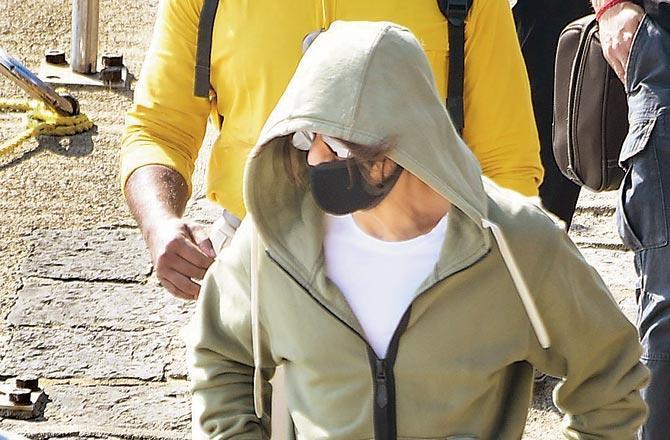 On Tuesday, Shah Rukh Khan was spotted at the Gateway of India. He was on his way to the Alibaug farmhouse. It’s been a while since he visited the beachside place due to the lockdown.

King Khan, who has been growing his mane for his upcoming film, Pathan, made sure to conceal his character’s look in a hoodie.

Speaking of Pathan, Deepika Padukone has reunited with Shah Rukh Khan for the film in what is their fourth collaboration. “The team is filming at Yash Raj Studios in Andheri, where a huge set has been erected,” revealed a source to mid-day.

The source added, “Deepika has joined Shah Rukh for a 20-day schedule, post which she will turn her attention to the Siddhant Chaturvedi and Ananya Panday starrer. She hopes to wrap it up by December-end.” Pathan also features John Abraham, albeit this time as an antagonist.

SRK and Deepika have earlier acted in films like Om Shanti Om, Happy New Year, and Chennai Express, whereas John and Deepika were seen together in Desi Boyz and Race 2.

Besides Pathan, SRK is also said to have given his nod to Rajkumar Hirani’s social comedy and South filmmaker Atlee’s actioner as well.

RELATED:  Salman Khan Reveals His 3 Films Are Ready For Release; Says, "There Is A Kabristan Kind Of Feel To Single Screen Theatres"