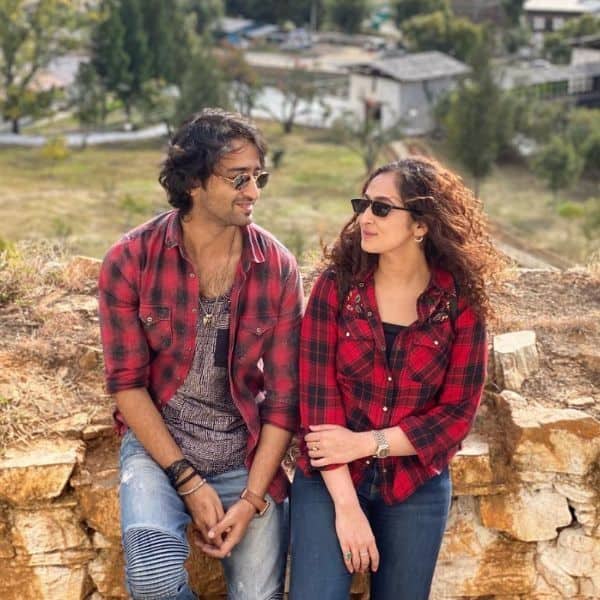 Shaheer Sheikh tied the knot with his girlfriend, Ruchikaa Kapoor last month thus breaking several hearts in the process. Since their wedding, the two love birds have been dishing out nothing but just #couple goals. Shaheer Sheikh and Ruchikaa Kapoor had been twinning with their outfits as they are enjoying a vacation out of the country. It is being said that Shaheer and Ruchikaa are in Nepal, trekking to their hearts’ extent. And they have successfully made a hattrick by twinning yet again. Also Read – Paurashpur: Shilpa Shinde is all praise for set designer, Nitin Desai; says, ‘Dharti pe jaise swarg banaya’ [EXCLUSIVE]

Shaheer Sheikh took to his social media handle to share a picture of the same. Both Shaheer and Ruchikaa are seen in red and black shirts. While the Yeh Rishtey Hain Pyaar Ke actor has worn it as a jacket over a printed tee and blue denim, Ruchikaa wore it like a straight shirt and wore a darker shade of denim. They both look at each other. Shaheer Sheikh and Ruchikaa Kapoor have worn shades and seem to be smirking at one another. It’s the perfect candid click while they were having a conversation. “Oh yes I am crazy too..” he captioned the post. Check out their picture below: Also Read – Shaheer Sheikh and Hina Khan entertain the audience as they welcome 2021 — view pics

While opening upon when he decided that Ruchikaa Kapoor was ‘the one’ for him, Shaheer Sheikh revealed that in front of her, he could be himself, the real crazy one. The Yeh Rishtey Hain Pyaar Ke actor revealed that it was during one of their trips together when he knew that he wanted to be with Ruchikaa forever. “People who know me, know the kind of person I am. For the world, I’m this person who keeps to himself and keeps quiet and someone who doesn’t really express. But people who know me, who are good friends, know I am a mad man. I am a person driven by my emotions so I go crazy sometimes. So I can be that in front of her, I can be myself. During those trips, I realised, ‘Yes, this is it.’ It felt perfect,” the Paurashpur actor added. Also Read – Shaheer Sheikh twins with wife Ruchikaa Kapoor yet again; says he’s ‘feeling on top of the world’ — view post