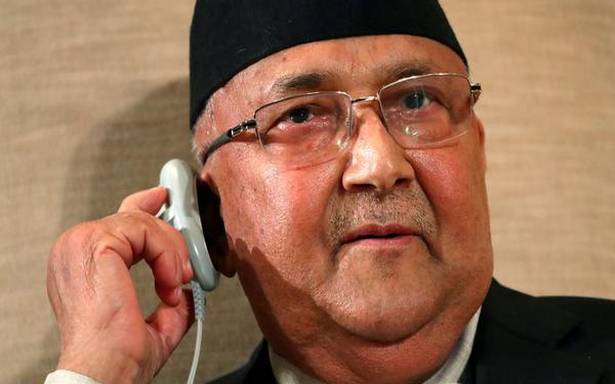 The Prime Minister of Nepal announced the new committee during a meeting of the party’s central committee members close to him at Baluwatar, his official residence, a report said.

Prime Minister K.P. Sharma Oli on Tuesday announced a new 1,199-member committee to organise the ruling Nepal Communist Party’s general convention in an effort to strengthen his hold on the party as it headed for a split, according to media reports.

Mr. Oli, who is also one of the two chairmen of the ruling party, announced the new committee during a meeting of the party’s central committee members close to him at Baluwatar, the Prime Minister’s official residence, the Kathmandu Post reported.

Nepal in turmoil: On dissolution of Parliament by KP Sharma Oli

The members of the newly-formed general convention organising committee took oaths in the presence of the Prime Minister.

Nepal on Sunday plunged into a political crisis after Mr. Oli got the President to dissolve Parliament, a controversial move amidst a prolonged tussle for power between him and former premier Pushpa Kamal Dahal ‘Prachanda’ within the ruling dispensation.

Mr. Oli’s latest move is aimed at achieving a majority in the Central Committee, My Republica reported. The newly-formed committee adds 556 members to the existing 446-member central committee of the ruling party.

Addressing the Central Committee members of his faction, Mr. Oli said that it would not make any difference to the party if some leaders quit. In the meeting, Mr. Oli also proposed to hold the party’s general convention on November 18-23 in Kathmandu next year. Earlier the party’s convention was scheduled from April 7 to 12, 2021.

Since elections have been declared for April 30 and May 10, it is not possible to hold the general convention before November next year, according to a party member.

Mr. Oli’s decision to announce the new committee comes at a time when rival factions of the ruling party are preparing to make formal announcements for a party split. The rival faction led by Prachanda is also holding separate central committee meetings in Kathmandu.

Both factions of the party have intensified their efforts to retain official party recognition along with the election symbol. The two factions are now busy making strategies to wrest control of the party.

On Monday, the Prachanda-led faction informed the Election Commission of the party’s Standing Committee’s decision to take action against chairperson Oli for breaching party discipline.