Home General She Chronicled China’s Crisis. Now She Is Accused of Spreading Lies

She Chronicled China’s Crisis. Now She Is Accused of Spreading Lies 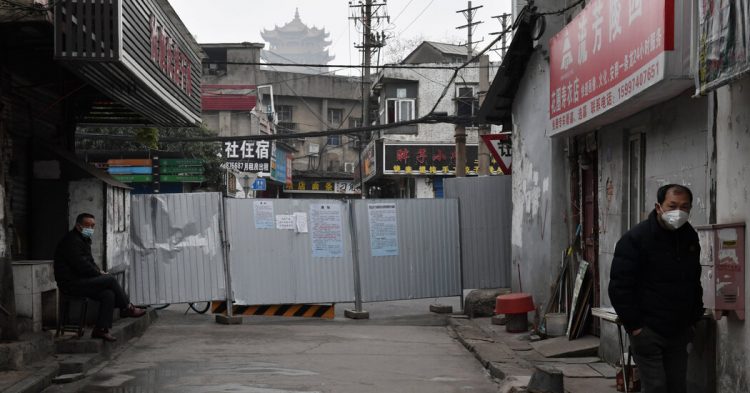 In one video, during the lockdown in Wuhan, she filmed a hospital hallway lined with rolling beds, the patients hooked up to blue oxygen tanks. In another, she panned over a community health center, noting that a man said he was charged for a coronavirus test, even though residents believed the tests would be free.

At the time, Zhang Zhan, a 37-year-old former lawyer turned citizen journalist, embodied the Chinese people’s hunger for unfiltered information about the epidemic. Now, she has become a symbol of the government’s efforts to deny its early failings in the crisis and promote a victorious narrative instead.

Ms. Zhang abruptly stopped posting in May, after several months of dispatches. The police later revealed that she had been arrested, accused of spreading lies. On Monday, she will go to court, in the first known trial of a chronicler of China’s coronavirus crisis.

Ms. Zhang has continued to challenge the authorities from jail. Soon after her arrest, Ms. Zhang began a hunger strike, according to her lawyers. She has become gaunt and drained but has refused to eat, the lawyers said, maintaining that her strike is her form of protest against her unjust detention.

“She said she refuses to participate in the trial. She says it’s an insult,” Ren Quanniu, one of the lawyers, said after visiting Ms. Zhang in mid-December in Shanghai, where she is being held.

Ms. Zhang’s prosecution is part of the Chinese Communist Party’s continuing campaign to recast China’s handling of the outbreak as a succession of wise, triumphant moves by the government. Critics who have pointed to officials’ early missteps have been arrested, censored or threatened by police; three other citizen journalists disappeared from Wuhan before Ms. Zhang did, though none of the rest has been publicly charged.

Prosecutors accused Ms. Zhang of “picking quarrels and provoking trouble” — a frequent charge for government critics — and recommended between four and five years in prison.

“She was shocked,” Mr. Ren said. “She didn’t think it would be that heavy.”

Ms. Zhang was among of a wave of journalists, professionals and amateurs who flocked to Wuhan after the lockdown was imposed in late January. The authorities were preoccupied with trying to manage the chaos of the outbreak, and for a brief period, China’s strict censorship regime loosened. Reporters seized that window to share residents’ raw accounts of terror and fury.

In her first weeks, Ms. Zhang visited a crematory, a crowded hospital hallway and the city’s deserted train station. On March 7, when Wuhan’s top Communist Party official said residents should undergo “gratitude education” to thank the government for its anti-epidemic efforts, Ms. Zhang walked through the streets, asking passers-by if they felt grateful.

“Is gratitude something you can teach? If you can, it must be a fake gratitude,” she said into the camera afterward. “We’re adults. We don’t need to be taught.”

Ms. Zhang’s videos were often shaky and unedited, sometimes lasting just a few seconds. They frequently showed the challenges of independent reporting in China under the Party’s tightening grip. Many residents ignored Ms. Zhang or told her to leave. If they did talk, they asked her to point the camera at their feet.

While she posted some videos and essays to WeChat, a popular messaging service in China, she said she often encountered censorship on the platform. She largely relied on YouTube and Twitter, which are blocked in China but can be accessed through virtual private networks.

Ms. Zhang had never been a citizen journalist before traveling to Wuhan from Shanghai, where she lived, said Li Dawei, a friend who exchanged messages with her often while she was reporting. But she was stubborn and idealistic, he said, to a point that was sometimes difficult to understand.

Ms. Zhang appeared to know the risks of her actions. In one of her first videos, on Feb. 7, she mentioned that another citizen journalist, Chen Qiushi, had just disappeared, and another, Fang Bin, was under surveillance. Whistleblower doctors had been silenced, she added.

“But as someone who cares about the truth in this country, we have to say that if we just wallow in our sadness and don’t do something to change this reality, then our emotions are cheap,” Ms. Zhang said.

Not long afterward, Mr. Fang disappeared. So did Li Zehua, another citizen journalist who had traveled to Wuhan. China’s leader, Xi Jinping, had recently ordered officials to “strengthen the guidance of public opinion,” and hundreds of journalists from state media were deployed to the city.

The crackdown also extended to people who had tried to document the crisis in less direct ways. In April, three volunteers who had created an online archive of censored news articles about the epidemic went missing; two were later charged with picking quarrels and provoking trouble, though their trials have not begun, according to family members.

Despite the scrutiny, Ms. Zhang continued moving around Wuhan for several weeks, potentially in part because she had not attracted a large following. Some of her videos were viewed only a few hundred times on YouTube.

Her friend, Mr. Li, warned that the authorities would lose patience eventually, especially as Ms. Zhang grew increasingly bold. At one point, she went to police stations to inquire after the missing citizen journalists.

“She believed me, but she still just wouldn’t stop,” Mr. Li recalled. “She said, ‘I haven’t finished my work in Wuhan.’”

In mid-May, Ms. Zhang suddenly stopped responding, Mr. Li said. He later learned that she had been arrested and brought to Shanghai. The indictment, reviewed by The New York Times, accused Ms. Zhang of “making up lies and spreading false information.” It also noted that she had given interviews to “foreign media” such as Radio Free Asia and the Epoch Times.

Ms. Zhang began refusing food not long after her arrest, according to her lawyers. When one of them, Zhang Ke Ke, visited her in jail earlier this month, he saw that her hands had been tied with restraints, according to a post on his WeChat account. Ms. Zhang explained that the guards periodically inserted a feeding tube and had bound her hands so she could not pull it out, Mr. Zhang wrote. (The two Zhangs are not related.)

Ms. Zhang said she felt dizzy and had stomachaches, Mr. Zhang continued. A Christian, she wished she had a Bible and quoted to him from I Corinthians: “God is faithful, who will not suffer you to be tempted above that ye are able.”

Both Mr. Zhang and Mr. Ren, who visited separately later, pleaded with Ms. Zhang to eat. But she refused, Mr. Ren said.

“She’s much paler than in her videos and photos — deathly pale,” Mr. Ren said, adding that Ms. Zhang appeared to have aged several decades. “It’s really hard to believe that she’s the same person as you saw online.”

China’s court system is notoriously opaque, with sensitive cases often heard behind closed doors. In 2019, the conviction rate for Chinese courts was 99.9 percent, according to government statistics. Ms. Zhang’s lawyers recently petitioned for Ms. Zhang’s trial to be live-streamed, to ensure transparency, but they have not heard back, Mr. Ren said.

Of the other citizen journalists who disappeared, just one, Mr. Li, has publicly emerged. In a YouTube video in April, he said he had been forcibly quarantined but not charged. Another, Mr. Chen, is reportedly with family but has not spoken publicly; friends say he is under surveillance. There has been no news of Mr. Fang.

In her second-to-last video before her own arrest, Ms. Zhang walked down a street in a neighborhood where cases had recently been reported. As she filmed the shuttered shops, a man in a neon vest emblazoned with the words “on duty” confronted her, asking her where she lived and whether she was a journalist. When Ms. Zhang rebuffed him, he yelled, “If you post this online, you’ll have to take responsibility.”