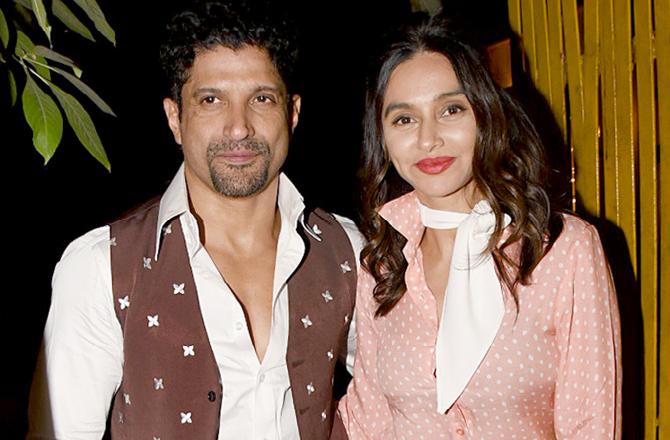 Farhan Akhtar and girlfriend Shibani Dandekar keep treating fans with adorable pictures on social media. Recently, Shibani poured her heart out for her boyfriend as they brought in Christmas together.

Shibani shared a picture of the two relaxing on the beach. In the picture, the Rock On actor could be seen leaning on Shibani and planting a sweet kiss on her head while Shibani clicks a perfect selfie. Sharing the photo, Shibani wrote, “Merry Xmas from mine to yours @faroutakhtar (sic).”

The couple celebrated this year’s Diwali by vacationing together in the Maldives. Farhan’s daughter (from his ex-wife Adhuna Bhabani) Akira too accompanied the duo. Shibani Dandekar treated her fans with an adorable picture with her beau. In the image, the lovebirds can be seen enjoying pool time as they look at the breathtaking view of the azure blue waters of the Indian Ocean. “Happy place @faroutakhtar,” Shibani captioned the image along with a star emoji.

Farhan also posted a picture of Shibani and his daughter, Akira, jumping in joy on the beaches of Maldives.

Farhan, a month ago, shared two videos that captured him and his daughter Akira scuba diving among the corals. Have a look:

A few months back, when Shibani ringed in her 40th birthday, The Zindagi Na Milegi Dobara actor wished her by sharing an adorable note along with a picture with his lady love. In the picture, the love birds twinned in black and they were all smiles for the photo. Shibani looked cute as she leaned on the Rock On actor’s shoulders.

On the work front, Farhan Akhtar is gearing up for his next, Toofan, a boxing drama. Directed by Rakeysh Omprakash Mehra, Toofan also features Paresh Rawal and Mrunal Thakur. The project marks the second collaboration for Akhtar and Mehra, post Bhaag Milkha Bhaag, the 2013 biopic on legendary Indian athlete Milkha Singh.