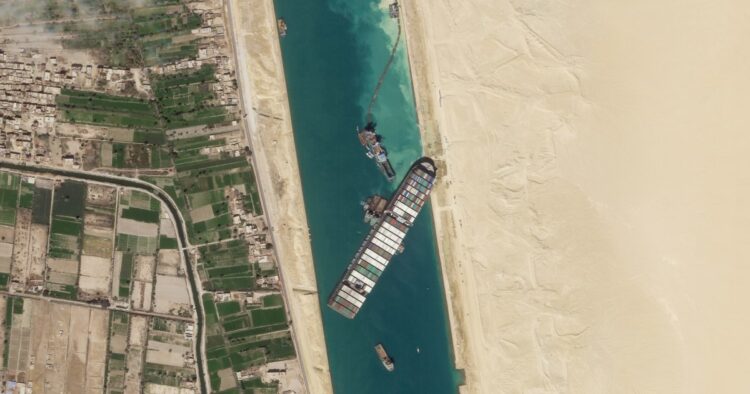 The giant container ship that had plugged the Suez Canal for nearly a week was dragged off the channel’s banks and refloated Monday, allowing ships to once again traverse the 120-mile vital waterway and easing fears of a major, prolonged disruption to world trade.

The Ever Given had been trapped in the canal since Tuesday after its ends ran aground on opposite banks, blocking passage to hundreds of vessels and putting an Empire State Building-sized obstruction in a canal that handles about a tenth of global maritime commercial traffic.

“I am excited to announce that our team of experts, working in close collaboration with the Suez Canal Authority, successfully refloated the Ever Given on 29 March at 15:05 hrs local time, thereby making free passage through the Suez Canal possible again,” Peter Berdowski, chief executive of the Dutch salvage firm Boskalis, said in a statement. “I’m extremely proud of the outstanding job done by the team on site as well as the many SMIT Salvage and Boskalis colleagues back home to complete this challenging operation under the watchful eye of the world.”

Leth Agencies, which offers services to ships transiting the canal, was more succinct in a tweet Monday afternoon: “M/V EVER GIVEN is no longer #grounded.”

It is with utmost pleasure that we can confirm that the #Suez Canal Authority and staff have succeeded in re-floating M/V EVER GIVEN. She is currently underway to Great Bitter Lake. More information will follow on our profile. M/V EVER GIVEN is no longer #grounded pic.twitter.com/jLjkeXAu4m

Later it said that vessels had resumed transit, with 43 departing the Great Bitter Lake, a wide section of the canal used as a waiting area during the crisis. Dozens of other ships would then enter from Port Said for a southbound journey across the channel.

The full dislodging of the 200,000-ton vessel — a so-called ultra-large container ship — came after a last-ditch effort that took hours after the ship was already partially refloated earlier Monday.

Overnight Sunday, 10 tugboats had pulled the ship from four different directions, the Egyptian state-run Suez Canal Authority said. But it was the tide, drawn by a full moon, that may have been the decisive factor in the partial refloating: At about 4:30 a.m. local time, with water levels rising in the area, the mega-ship was “successfully refloated,” Lt. Gen. Osama Rabie, the authority’s chief, said in a statement Monday.

He added that the ship had responded to the tugboats’ maneuvers, forcing what he said was a “restoration of 80% of the vessel’s direction” and swinging the stern of the vessel so that it was roughly 332 feet from the western bank of the canal.

The rising tide proved crucial again later Monday morning when workers were finally able to drag the ship completely off both banks.

Live video broadcast by local media outlet eXtra News showed the ship traveling at a stately pace amid a flotilla of tugboats, like a mammoth among chihuahuas. It is now berthed at the Great Bitter Lake and awaiting technical inspection.

Videos posted on social media earlier Monday showed the tugboats blaring their horns in raucous celebration as the Ever Given appeared to swing out into the canal during the partial refloating. But the bulbous section below the Ever Given’s prow remained stuck on the rock-covered bank.

Still, Egyptian President Abdel Fattah Sisi didn’t wait for the full refloating before striking a celebratory tone in a speech in which he lauded Egyptians for “ending the crisis … despite the massive technical complications that surrounded this operation from every side.” He added that the “whole world is assured of the passageway of its goods and requirements.”

Under normal circumstances, more than 50 ships per day bearing all kinds of cargo — including tea, TVs, livestock and furniture — cross the waterway linking the Red Sea to the Mediterranean. By Monday morning, about 370 vessels were waiting at the Suez Canal’s southern and northern entrances, Leth Agencies said.

That backup included ships carrying oil and gas shipments crucial for several Middle Eastern countries. On Saturday, Syria’s oil ministry said the government would start rationing fuel until the Ever Given was freed. Lebanon, too, was waiting for a Kuwaiti tanker set to deliver gas oil to one of the country’s major power plants, local media reported Friday.

A breakthrough in the crisis couldn’t come too soon for the global economy. With the canal blocked, ships would have to voyage around Africa’s Cape of Good Hope, adding 12 to 21 days to the journey and tens of thousands of dollars in extra fuel costs. For Egypt, it would mean a major loss of foreign currency from its operation of the canal, which in 2020 generated about $5.61 billion in revenue.

The effort to dislodge the Ever Given became a national rallying cry in Egypt, with the usually stodgy Facebook page of the Suez Canal Authority inundated with comments from residents in solidarity with the government agency. On Monday morning, the hashtag #Suez_Canal_Heroes was making the rounds. Later, the authority posted a video touting the operation’s success, with a martial soundtrack accompanying a dramatic pan of the Ever Given and its escorts sailing up the canal.

The Ever Given’s leviathan size had been the salvage crews’ chief enemy. At 1,300 feet long and 193 feet wide, the ship carries some 18,300 containers in stacks of nine, which add almost 200,000 tons to its already gargantuan weight.

The ship also became lodged in arguably the worst place possible in the canal, in a narrow section less than 1,000 feet wide and lined with riprap, or chunks of rock dumped along shorelines to protect them. With the ship beached at both ends, the bow and stern carried the vessel’s entire weight, and the middle section began to sag, which created what experts described as micro-cracks in the ship’s hull.

That forced authorities to work 24-hour shifts, alternating between dredging and tugging by a growing fleet of tugboats. Over the weekend, those efforts removed almost 1 million cubic feet of mud and water — enough to fill about 11 Olympic-size swimming pools — to lower the depth of water along the bank to just under 60 feet, Rabie said.

In a bid to reduce the ship’s weight, some 9,000 tons of the Ever Given’s ballast water were released, along with plans to empty out its massive fuel tanks. Had those measures failed, the only recourse would have been to remove containers off the ship’s deck — a slow, costly process that would have required mobile cranes and other ships to help offload the cargo.

As the crisis dragged on, foreign governments offered assistance, including the U.S., the United Arab Emirates, China and Saudi Arabia. On Friday, White House Press Secretary Jen Psaki said the U.S. was “consulting with our Egyptian partners about how we can best support their efforts.” The U.S. Navy planned to dispatch an assessment team.

The Suez Canal Authority “expressed sincere gratitude” for the offers of help, while Sisi turned the operation into a matter of national pride.

“Egyptians proved today they are always equal to the responsibility,” Sisi said, “and that the canal they dug with the bodies of their ancestors and which they defended with the souls of their fathers … will continue to bear witness that Egyptians’ will shall go where Egyptians decide.”