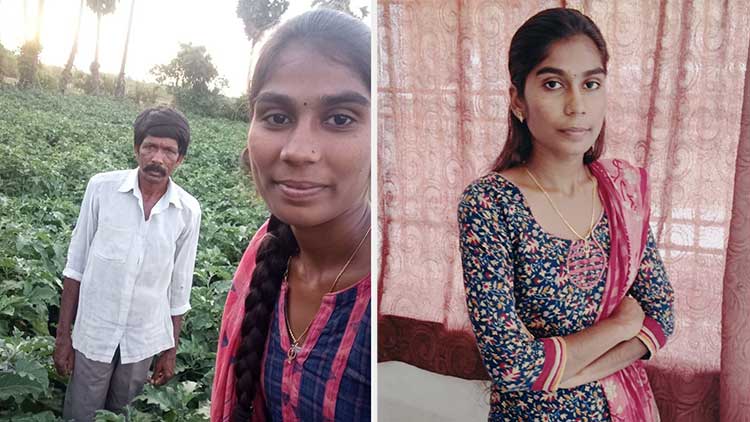 “For many girls in our villages, education is the only way out,” says Shobha Katuru whose story is getting appreciation from thousands of people across the globe.

Shobha Katuru hails from a remote village and has a humble background in Andhra Pradesh. Her father is a small farmer. In her village, most girls study only till 10th standard in the local government school and soon after, they are married off. They never had an opportunity to pursue further education.

This has been the norm for ages. But Shobha wanted more from her life. Her uncle, who is a government school teacher, encouraged her to study well. With his motivation and her efforts, she always fared well. She stood first in 10th standard in her entire Mandal. With her outstanding results, she secured a free college seat. Her uncle convinced her parents to allow her to study further.

Transitioning from Telugu medium to English medium in her college was very challenging for her. She slowly overcame that. For her engineering, she chose ECE inspired by a distant cousin’s brother who went to the Netherlands after getting his ECE degree. But, she got interested in coding and technology from her CSE roommates.

During the Covid pandemic, she wanted to take the interest further. She joined CCBP because she could learn tech skills in her mother tongue. She started studying from home. But life was not easy for Shobha. She didn’t have a laptop and had to study only on her old 3G phone.

Adding to her troubles, the internet connection got weak in the evenings in her village. Hers was a big family with 10 cousins and many aunts and uncles. There was always something happening. So, she used to wake up early in the morning, go to the terrace for better signal and complete her classes by afternoon.

“My success is the result of the hard work of so many people. It’s my uncle who convinced my parents to allow me to study further. After that, my parents and family members supported me a lot. During interviews, she borrowed her cousin’s friends’ mobile and data pack,” says Shobha.

When they got to the Javascript course, it became difficult for Sobha to learn on her phone, but she persisted. She says that the challenge made her love the course even more!

“In this journey, I am very thankful to my mentor & guide Rahul Attuluri sir. I used to feel very motivated not to miss his class. He gives real-life examples and explains concepts in an interesting way. My brother who just finished 10th standard understands all these concepts just by listening to Rahul sir. Though I was good with technical skills. I still had a fear of the English language and communication. Girish sir, Karthik sir motivated us to be strong and bold in the interviews. The entire team took care of me like their own family,” she shared.

People didn’t understand her stubbornness for studying and thought it was useless for a girl. But they no longer think this way. Breaking all the stereotypes, for the first time in her village, a girl graduated and got an IT Job.

Shobha got placed as a Data Engineer Trainee at Systech, a Los Angeles based technology company.

Because of her success, her cousins and friends started understanding the value of
standing up for themselves and are getting inspired by her. So many people are now
approaching her and asking her for guidance

“I want to reach higher positions in my current job and domain. I’m giving my best
and completing everything perfectly and on time. That is my focus now”, she shared.

She shared her journey on Linkedin and has been receiving tens of thousands of
responses from all over the world, even from the official Linkedin handle

“I am very happy that many people are getting inspired by my story and thinking about building their careers. Luck has never been on my side, but my hard work is my best friend. And the good thing about hard work is that it favors all.” she shared with a smile.

Shobha’s success proves that for many young girls in India, education is the most powerful weapon. We appreciate her strength and determination in reaching her goal. This success is not just hers. It’s a celebration of the wealth of talent in rural India.

If you too have an inspiring story to tell the world, send us your story at [email protected]