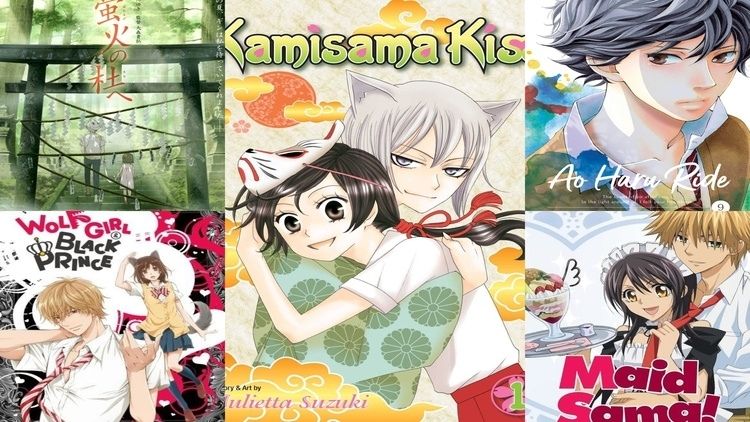 This anime screams shoujo from every angle. The main character Momozono Nanami becomes land god and falls in love with her familiar Tomoe who used to be a demon fox.

The anime has 2 seasons and both of them establish a deep connection between the two main characters. It shows how a woman would feel about love when it is the first time she develops feelings for someone. It is based on a concept of soulmates which makes the anime more and more dreamy.

Overall, it is the perfect watch for all hopeless romantics out there.

This one is quite a cliché one. The main character Erika Shinohara is desperate to fit in the showy group of friend. So, she pretends to have a boyfriend until she is asked to show a picture of him. She goes on to take a picture of a random stranger in a crowd who looks handsome enough. The stranger happens to be Sata Kyoya from her school. Later she asks him to pretend to be her boyfriend but Kyoya puts a condition. He is cold and asks her to do as he says all the time when no one is around so he can get entertained. Even after this, Erika seems to fall in love with her and so does Kyoya.

The anime revolves around an overachieving student Ayuzawa Misaki. She is struggling with financial conditions at home. This forces her to attend a school with low fees. Which happens to be a former boys school recently turned to co-ed. While she works as a maid in a café in the nearby town.

She is the president of the student council who tries to give all the recognition to the girls in the school so that more girl students enrol in the school. And help make it a better environment for both girls and boys. After a chance encounter with Usui Takumi, a boy, during her maid job. Misaki tries to persuade Usui to not disclose her job in school. Thus, unravels an unexpected love story between the two and they are just perfect as a couple. Any hopeless romantic at heart will want an Usui in her life after watching this anime.

This is one of those anime which does not have a specific ending. It is an open ending in the anime but the manga has a definitive ending. Ao Haru Ride or Blue Spring Ride is the love you feel in the season of spring.

The main character Yoshioka Futaba tries to get her first love Mabuchi Kou back. She fell in love with him in middle school but due to circumstances he changed schools and did not come around until high school. Though he is back, he is not the same shy and timid person he used to be in middle school.

This anime will give you the warmth that spring brings in after a cold winter.

1. Into The Forest Of Fireflies’ Light (Hotarubi No Mori E)

This anime movie will make you cry like a baby. Period.

A little boy was abandoned in the forest and the spirits of the forest took him to raise him. He was given a fatal condition though. He meets a small girl once in the forest and continues to meet her and play with her till she is in high school. They eventually fall in love and go on a date which is quite successful. But while going back to the forest, a series of events happen and the girl ends up losing him.

This movie will take you on and emotional ride and is by far the best anime movie in the list.