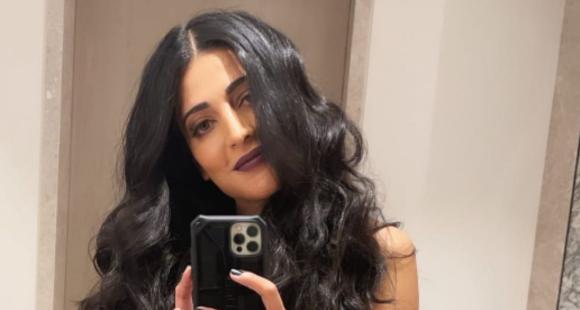 Shruti Haasan was last seen in the Ravi Teja co-starrer Krack. She will next be seen in Laabam which also features Vijay Sethupathi.

Shruti Haasan is an avid social media user and never fails to impress her fans whenever she posts something on the platforms. Be it sharing BTS pictures from movie sets or be it giving a glimpse of her music jamming sessions, the South diva does it all with ease. As of now, Shruti is busy with some of her upcoming projects. However, she doesn’t forget to keep her fans updated in between and what better than Instagram to the same!

As we speak of this, the actress shared a picture on the photo-sharing app sometime back which is hard to miss. Shruti dresses up in black athleisure that includes a bralette and faux leather leggings as can be seen in the picture. She leaves her hair open as usual and opts for a dark purple lip colour to match with her attire. As usual, her killer expressions and stunning outfit send the fans into a frenzy here.

Shruti Haasan has been garnering a lot of praise owing to her stint in Krack which was among those movies which had a theatrical release in January this year. The action drama featured Ravi Teja in the lead role. The actress will next be seen in Laabam which also features Vijay Sethupathi. The movie has been helmed by SP Jananathan. Apart from that, Shruti has also been roped in for the Pawan Kalyan starrer Vakeel Saab. Of late, the actress has been making headlines owing to her dating rumours with Santanu Hazarika.