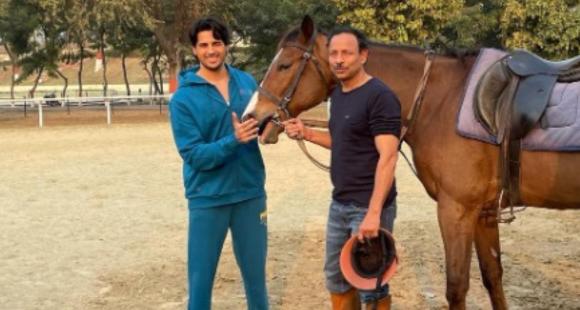 Having recently jetted off to Lucknow to kick off the Mission Majnu shoot, Sidharth Malhotra has been busy with work. However, his recent photos from a horse riding session in Lucknow have taken the internet by storm.

Just this week, fans of Sidharth Malhotra got a surprising treat as the actor headed off to Lucknow to kick off the shoot of his spy thriller, Mission Majnu. And now, some new photos of the actor have taken the internet by storm as he was seen heading for a horse riding session in the city. Sidharth, who had gone to Lucknow to begin filming Mission Majnu, apparently spent a little while with the magnificent horses and the photos were shared on social media.

Sidharth”s horse riding session in Lucknow was chronicled by Anurag Singh Bhadouria, National Spokesperson of Samajwadi Party. The leader shared the photos on his Instagram handle. In the photos, Sidharth is seen posing with the horse at the field. The actor could be seen opting for a casual OOTD for a horse riding session in Lucknow. He is seen clad in a navy blue co-ord tracksuit with sneakers. Patting the horse, the actor seemed to be enjoying some time off from work.

As soon as the leader shared the photos with the handsome star on social media, they went viral among his fan clubs. Many rooted to see the star on the horseback.

Recently, ahead of Valentine’s Day, Sidharth’s new music video with Neha Sharma, Thoda Thoda Pyaar was released. It is already a trending song on YouTube. Besides this, he is shooting for Mission Majnu in Lucknow. The film also stars Rashmika Mandanna. Besides this, Sidharth also has Thank God with Ajay Devgn and Rakul Preet Singh. His film Shershaah with Kiara Advani is also a highly anticipated release.