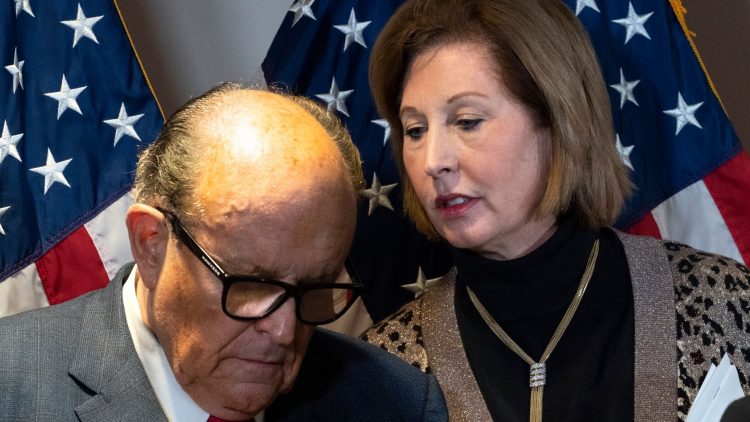 A secret witness who lawyer Sidney Powell has promised would reveal presidential election fraud turns out to be a pro-Donald Trump podcaster once sued for fraud, The Washington Post reported.

The QAnon-supporting lawyer has filed a series of failed, typo-riddled lawsuits challenging the results of the presidential election. Powell has claimed in court documents that her witness, a former “intelligence contractor,” knows about a foreign conspiracy to attack the election. Powell said her informant’s identity could not be revealed in order to protect her life.

But podcaster Terpsichore Maras-Lindeman of North Dakota, who confirmed to the Post that she’s the informant, served less than a year in the Navy in the 1990s, the Post reported Thursday, and there’s no indication she worked in intelligence or as an intelligence contractor.

Her affidavit submitted in Powell’s lawsuit is a slight rewording of one of her blog posts written more than a year before the election, according to the Post.

A 2018 civil fraud case against Maras-Lindeman by the North Dakota Attorney General’s Office accused her of falsely claiming to be a physician, a Purple Heart recipient, and a Navy intelligence veteran, using several aliases and social security numbers, and exaggerating her resumes in a “persistent” effort to “deceive others,” the Post reported. A judge earlier this year ordered Maras-Lindeman to pay $25,000 in fines and attorney fees after spending donations solicited for veterans’ wreaths and homeless shelters on herself. She denied the accusations and is appealing the ruling to the state Supreme Court.

The news about Powell’s witness comes amid reports that Trump is considering naming the lawyer as special counsel to investigate election fraud. Trump floated the idea last Friday in a heated meeting with top aides, who blasted the idea, according to media reports confirmed by Powell.

The lawyer complained Thursday that aides are now prohibiting her from communicating with the president.

She claimed Trump offered her a special counsel post on Friday but she hasn’t been able to present the paperwork to make it official. The job has so far “not come to pass because it seems it was blocked after Friday night, or undone, or I’m not sure what you’d call it,” Powell said.

She said she wouldn’t be a “Robert-Mueller-style special counsel,” but “there was a discussion about me being a special White House counsel.”

Trump apparently hasn’t dismissed the idea, according to his tweet Wednesday saying he disagrees with “anyone that thinks a strong, fast, and fair Special Counsel is not needed IMMEDIATELY” to investigate election results.

After seeing the massive Voter Fraud in the 2020 Presidential Election, I disagree with anyone that thinks a strong, fast, and fair Special Counsel is not needed, IMMEDIATELY. This was the most corrupt election in the history of our Country, and it must be closely examined!

Trump’s campaign last month distanced itself from Powell after she passionately promoted a bizarre conspiracy theory that Americans working with Venezuela, China, Serbia, Canada, Venezuela, Cuba, the CIA, billionaire philanthropist George Soros and the Clinton Foundation (among others) plotted to rig the presidential election against Trump by tampering with voting machines.

But Trump has kept in touch with her, and invited her to the Friday meeting when he discussed naming her as special counsel.

Trump’s former national security adviser Michael Flynn, who was recently pardoned by the president after confessing to felonies, accompanied Powell to the meeting and urged the president to declare martial law and remain as president to “rerun” the election, the AP reported. Flynn has denied he called for martial law in the meeting, but he did publicly urge the action in a recent interview.

Powell has touted another secret witness on election fraud as a military intelligence expert identified in court filings as “Spyder.” The Post reported earlier this month that the witness is a tech consultant who never worked in military intelligence, but mostly as an Army mechanic.

Trump has refused to concede the presidential race and repeatedly insists, with no evidence, that the vote was rigged.