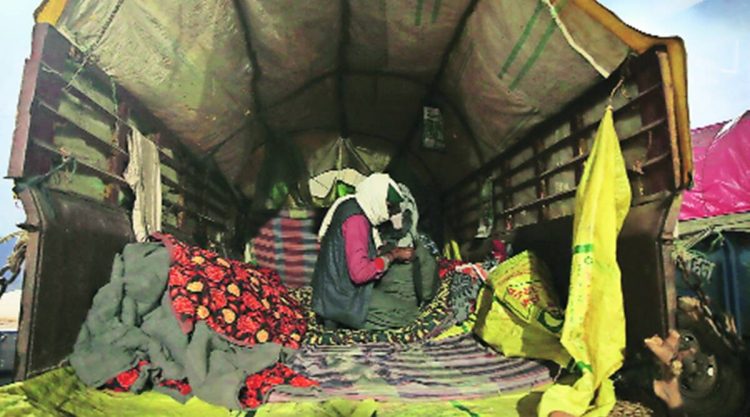 One of the protesting farmers takes shelter in a makeshift tent on a trolley on Delhi-UP border on Sunday. (File)

As the scale of the protest at the Singhu border becomes bigger by the day amid the biting cold, volunteers are ensuring there is no dearth of medical aid for farmers. Since November 26, several medical camps — akin to temporary clinics — have come up, which cater to various ailments, check blood pressure and provide quick relief medicines.

The camps, mostly set up by NGOs and volunteer organisations from Punjab, Haryana and Delhi, are essentially makeshift tents with dozens of medicine boxes on display. While some protesters know what medicines they require, others are guided by doctors, who are at the site from morning till evening.

At a camp set up by the Medical Service Centre, a national-level voluntary medical organisation, behind the main protest stage, counters have been designated for treatment. Patients need to register at the first counter, following which a general physician evaluates them at a second counter. A doctor provides a prescription, which is presented at the third counter where another volunteer hands over the medicine.

“At any point, there are at least two doctors available. Most of the medicines have been brought by us from different places, while some have been donated to us. Our camp has been operational since December 1 and we will remain here till the protest continues. The winter is getting harsher, so a lot of people have weather-related issues,” said Pratigya Majhi, a volunteer from the organisation, who travelled from Madhya Pradesh to set up the camp at the border.

The camp sees more than 200 patients during the day.

Across the camps, disprin, paracetamol, ibuprofen and other painkillers for headaches are the most distributed medicines. With mercury dipping to as low as 4 degrees Celsius over the past week, demand for medicines for fever have also shot up. Apart from these, pain relief gels have been given out in large numbers following complaints of joint pains due to standing for long periods of time.

Said Gurdeep Singh at the Akaal Aid medical camp, “We also keep digestive medicines in our stock, since a lot of people have been asking for it. This is happening because their eating patterns have changed since the protest. We also have a physiotherapist who has come from Haryana solely for sewa at the protest.”

Several locals have donated medicines to langars in large numbers over the last few days. People have also chosen to volunteer at the camps to help in distribution of medicines.

In the event a person has an ailment or an injury, ambulances parked close to the police barricades can rush them to the nearest hospital in Haryana.

“Some people have been injured by sharp edges of the trolley, some because they walked barefoot on the road. We provide bandage and dressing. In case the injury is severe, we contact the hospital and they are admitted. It is very important that they at least have a centre to provide first aid,” said Sunita Rani, an ASHA worker from Haryana volunteering at a CITU medical camp.

During the day, several farmers over the age of 50 make their way to the nearest medical camp. Waiting in line at one of the camps to get medicine for headache was 60-year-old Gurdas Singh. He said: “I feel very strained sometimes and there has been some pain. It is probably because of the cold since we have been sleeping in the open. But this will not be a deterrent in any way. We are here to stay and we will keep taking medications. So many farmers lost their lives. But our will is very strong.”

A dental camp has also been set up in a mobile van close to the main stage, equipped with a reclining dentist’s chair and other equipment. Several volunteer physicians keep going from camp to camp to examine patients as and when required. One of the camps also has a mobile team that goes to protesters enquiring about check-ups. The teams have stocked up on diabetes and BP medicines since several farmers cannot go back home for their regular dosage.