Indian Space startup, Skyroot Aerospace, has proven the crucial propulsion technology of their maiden rocket Vikram-1, with the latest test-firing of an engine. Vikram-1 rocket is powered by four engines- three solid-fuel stages and one Liquid-fuel stage that the firm has designed and developed. In August this year, the company had tested their liquid-fueled engine and now has proven the technology of the solid-fueled engine(Kalam-5), by successfully test-firing a miniature version.

Solid motors or solid-fueled engines are high thrust, low-cost rocket engines with propellant in solid form. They are highly reliable as they have very few moving parts. The Engine Testing was done at a private test facility on Dec 22nd in Nagpur owned by Solar Industries, which is India’s largest explosives manufacturer and a leading Space and Defence contractor (also partner and investor in Skyroot). 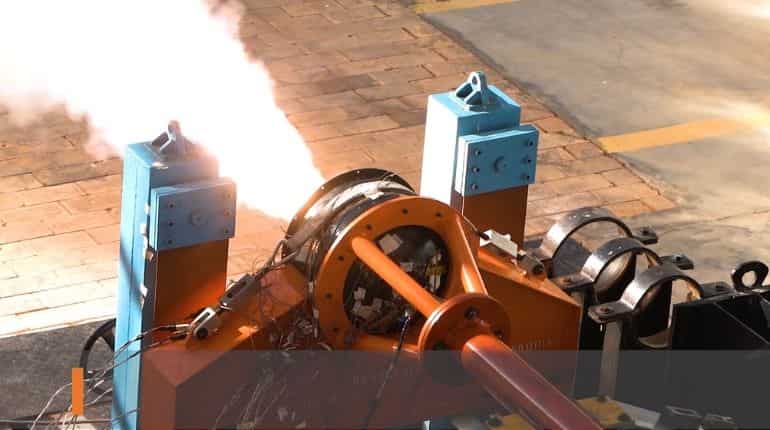 Theoretically, this means that the company is close to realizing their dreams of putting together an orbital-class rocket, as its propulsion technology is the hardest to master.

A typical rocket consists of two or more stages, each of which would have its own engines(either single or packed in a cluster). Simply put, a rocket is a combination of multiple engines(stages) that are vertically stacked.

“This test demonstrates the capability of our technology for the Vikram-1 rocket. Though we have fired a scaled-down engine during this successful demonstration, it must be noted that building a smaller engine is also a complex process. This successful test firing gives us the confidence that the bigger models will succeed” Pawan K Chandana, CEO, Skyroot Aerospace told Zee Media.

The Engine ‘Kalam-5’, is named so for its peak Sea Level thrust of 5.3kN. It is notable that the engine is built with an advanced carbon composite structure in a completely automated process. While Carbon composite cases are very challenging to design and manufacture, they are five-times lighter than steel, hence improving efficiency. Kalam is a series of five solid-fueled rocket engines with a thrust ranging from 5kN to 1000kN (approx 100Tons). In terms of technical specifications, Kalam-5 is designed to take 66 atmospheres and 30000C of combustion pressure and temperature respectively.

Team Skyroot had earlier told Zee Media that they were planning a maiden launch by December 2021. They added that the decision to launch a live satellite or a dummy payload would be taken by mid-2021, based on demand.