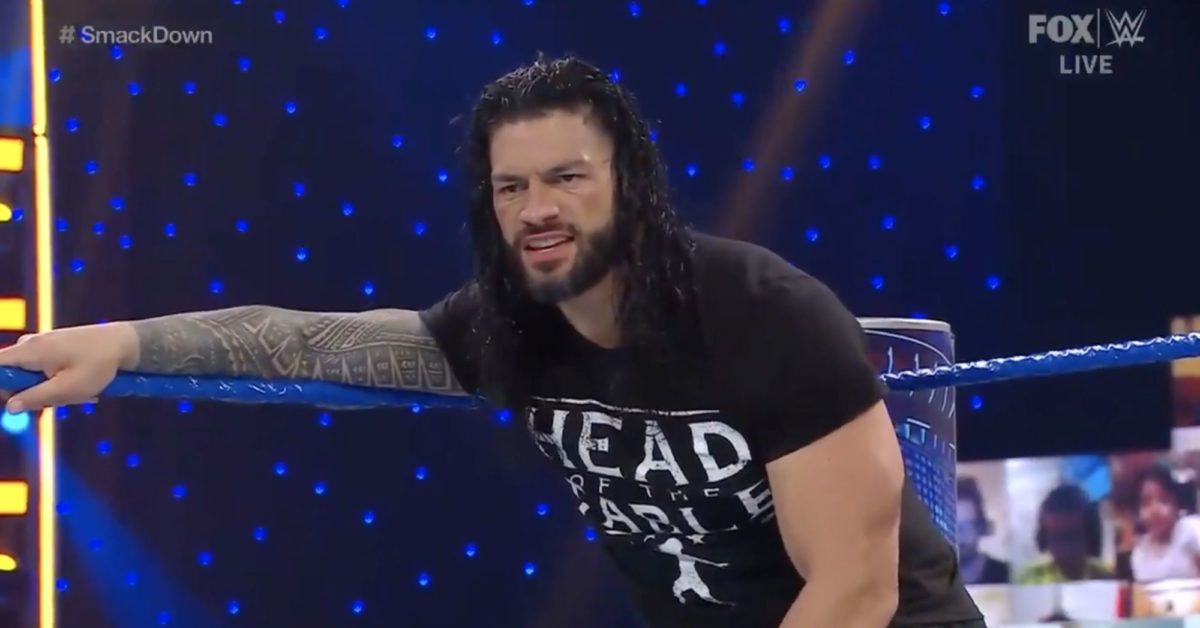 Roman Reigns and his crew head to the ring to kick off Smackdown, stopping along the way to soak in the boos from the nonexistent crowd. His entrance is so long WWE replays nearly the entire elimination chamber match and subsequent Roman vs. Daniel Bryan match from the PPV, and Roman has only just gotten in the ring when it’s done.

But if you thought the walk was long, wait until you see the promo. Roman goes on and on about how he beat Daniel Bryan, and it was great, but then Edge speared him, and that was bad. He suggests that Edge should back out of the match while he still can. The fake boos are thunderous at this point, which is the perfect moment for Daniel Bryan to interrupt.

Bryan takes issue with Roman’s description of his title defense at Elimination Chamber as “nearly perfect.” Bryan says it was cowardly to fight Bryan after Bryan wrestled the entire Elimination Chamber. He makes fun of Roman for defending the title in the second match of the show instead of the main event because he’s scared to face Bryan in a fair fight.

Bryan proposes that Roman defend his title one more time against Bryan at Fastlane. Jey Uso is livid at this suggestion, though the piped-in crowd noise seems to like it. Uso says Bryan has to go through him before he can face Roman. Bryan seems to agree. Roman talks some more trash, and Uso jumps Bryan and throws him into the Thunderdome crowd.

Edge complains to Adam Pearce and Sonya Deville about Daniel Bryan getting a title shot before he does. Uh, Edge, would you rather have the shot at Fastlane instead of WrestleMania? I’m sure Bryan would be willing to trade.

After commercials, Uso apologizes to Roman for offering Bryan a match if he can beat Uso. Reigns says that’s no problem as long as Uso wins. Yeah, that’s not likely to happen, is it?

Back to Edge Karening it up. Edge was under the impression that he’d be teaming with Bryan in a tag match against Jey Uso and Roman Reigns. Pearce tells him to get used to it; this is how WWE is booked these days. In fact, Vince McMahon is currently rewriting the script for the fifth time today as they speak!

Otis and Shorty G vs. Rey and Dominik Mysterio

Rey and Dominik look for revenge on Otis for squashing Rey last week. They don’t get it. Rey does get squashed again, though.

Apollo Crews comes out and cuts a no more mister nice guy type of promo to solidify his heel turn. He claims his grandfather was like a king in Nigeria and had five wives. I’ll have to check Wikipedia on that… yeah, I think it’s just kayfabe. Anyway, to illustrate the new gimmick, Crews starts talking with a Nigerian accent. He also has ring gear in the colors of the Nigerian flag. He’s basically doing a reverse Kofi Kingston or Lana.

Nakamura comes out, and they have a match, which Crews wins.

I’m hesitant to get invested because WWE has a poor track record, but the new Apollo Crews has potential.

Paul Heyman informs Roman Reigns that the stipulation for Daniel Bryan to get a title shot at Fastlane is official if Bryan wins tonight. The gears start turning in Roman’s head.

Tamina and Liv Morgan have a match. Not that it matters, but Tamina wins.

Adam Pearce and Sonya Deville invite Bianca Belair to the ring to choose her WrestleMania opponent. Bianca is totally just about to choose her opponent when Reginald comes out and starts talking about Carmella. Then Sasha Banks comes out. She shoves Reginald out of the way and tells Belair to pick a damn opponent for WrestleMania already. So Belair picks Sasha. Now, that wasn’t so hard, was it? She makes it official by pointing at the WrestleMania sign.

Sami Zayn interviews Baron Corbin for his documentary. Or tries to. Corbin doesn’t even want to be Sami’s tag team partner. But Sami says they had good chemistry a few weeks ago, and Sami could use a win, and he thinks they could beat the Street Profits and then challenge the Smackdown tag team titles. Corbin agrees they could go far, but he still doesn’t want to be in the documentary.

The Street Profits face Sami Zayn and Baron Corbin in a match. It doesn’t go well for the team of Zayn and Corbin because Corbin keeps getting distracted by the documentary crew until he starts shoving them, which distracts Zayn, and, to make a long story short, Zayn eats the pin from Dawkins after Ford hits a neat dive over the top of Zayn onto Corbin on the outside.

Corbin is pretty mad after the match.

Kayla Braxton asks Daniel Bryan about whether he could face Edge at WrestleMania. Bryan is optimistic. In fact, he thinks he has a better shot at beating Roman than Edge does. Bryan isn’t sure Edge has what it takes to beat Roman. Edge interrupts the interview to take offense at this. Edge wants to know who Bryan thinks will win if Bryan and Edge face each other. Bryan says he’ll save that answer.

Seth Rollins comes out and starts bitching. Cesaro comes out looking ready for a fight, by which I mean wearing jeans and no shirt. Rollins talks up all of Cesaro’s assets but asks why Cesaro always comes up short. Rollins says what Cesaro is missing is… RUTHLESS… AGGRESSION! No, he says “killer instinct,” and Rollins says he has it and can teach Cesaro to have it. He pitches a team-up, except in about 10,000 more words.

He tells Cesaro to think about it for a week or two. Cesaro doesn’t have to think about it. He grabs Rollins and gives him the Big Swing. “Put me d-AAAAAGGGGGGHHHHHHHHHH!” Say what you will about Rollins, but he can sell his ass off.

Daniel Bryan and Jey Uso have a good match, where all Uso has to do is prevent Bryan from winning, and he eventually does it, after attacking Bryan’s knee all match, by keeping him outside for a double count-out.

Bryan is pissed after the match and puts Uso in the Yes Lock. Roman Reigns comes out and attacks, but he gets put in the Yes Lock too. Uso kicks Bryan in the head, Reigns spears him, and then puts him in the guillotine. Reigns stands tall as Smackdown ends.

Daniel Bryan is a rare talent who is so good, even though we’ve all seen just how badly WWE dropped the ball with him and we all know damn well he’s not beating Roman Reigns for the Universal Championship, he can still get you invested in his match, like maybe, just maybe, he has a chance. Uso is another great talent who, by the way, has proved he’s a great singles wrestler over the last six months. So I gotta give it to WWE on giving us a great Smackdown main event. Yeah, once in a while, they deliver.