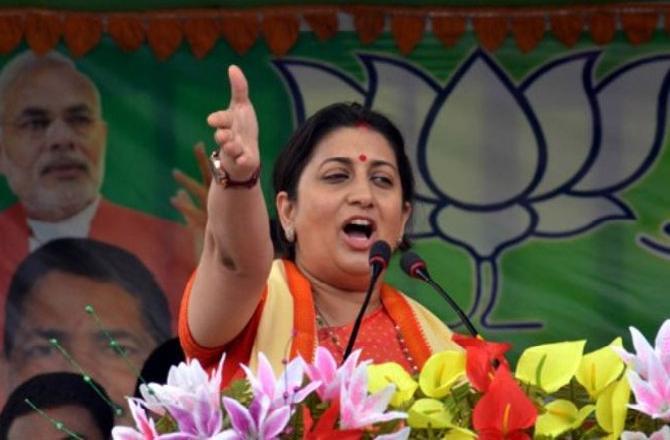 She said, “The Opposition leaders are saying that the three farm laws have been prepared by those who don’t know anything about agriculture. So, I would like to ask whether Rahul Gandhi and Sonia Gandhi are farmers? What was the pathetic condition of farmers in Amethi? One family was ruling there for the last 50 years but now the farmers in Amethi are moving towards prosperity.”

“Those who have oppressed the farmers for the last 70 years are now talking about their interests just to further their political interests. If anyone has done something for the farmers, it is Prime Minister Narendra Modi,” she added.

Sharing the schemes by the BJP-led government, Irani said, “It is the BJP government which has provided toilets to the women who used to defecate in the open, connected people with the Ayushman Bharat scheme, provided pensions to farmers, waived off their debts and now approved a budget of Rs 1.30 crore for farmers.”

“The BJP government has always worked for the interests of the farmers whether it has been related to the payment of sugarcane or other schemes related to agriculture.”

Slamming opposition parties, she said, “Opposition parties are spreading misinformation regarding MSP among farmers. The farmers must understand that earlier they were forced to send their produce within the district, but today they can sell it anywhere across the country. When farmers will have rights to fix the price of their produce, they’ll obviously prosper.”

Union Minister of State for Animal Husbandry, Fisheries and Dairying Sanjeev Balyan said, “The farmers of western Uttar Pradesh are prosperous and they understands that the Bill is in their favour. The farmers have understood who is behind the protests. Those behind the protests are trying to use it for their own political interests.”