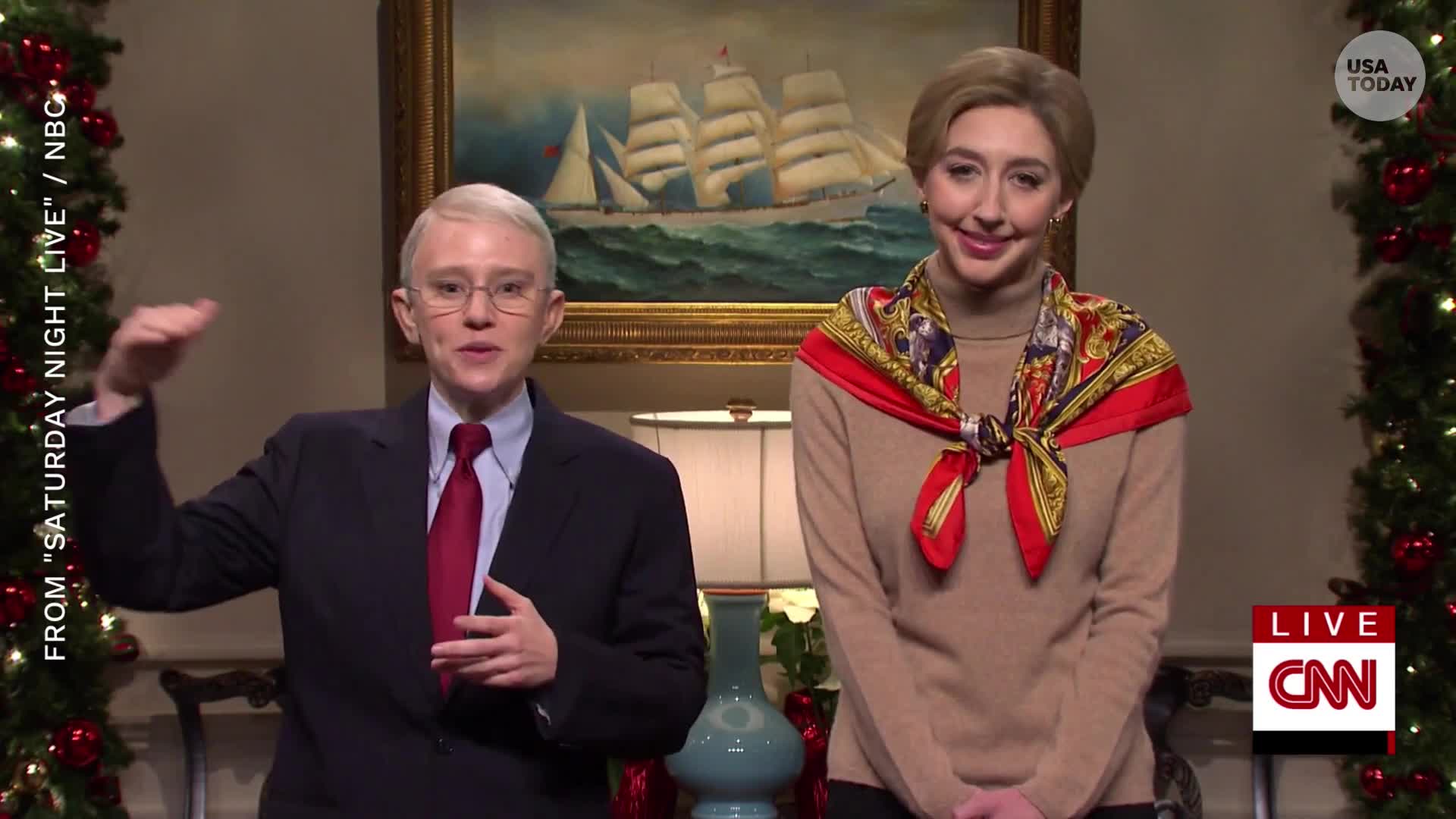 John Krasinski sharing a smooch with Pete Davidson and getting arrested for participating in the Capitol riot earlier this month is not something we had on our 2021 bingo card, but “Saturday Night Live” continues to surprise us.

Krasinski hosted “SNL” for its first episode of the year, but couldn’t seem to shake his “Office” character, Jim Halpert. Krasinski took the stage to share how honored he was to host his favorite show, but the director of “A Quiet Place” was interrupted by questions about “The Office” from members of the audience.

“Hey, Jim. I have a question. … So my question is you’re Jim from ‘The Office’?” asked Alex Moffat before asking him where Pam was.

Ego Nwodim told Krasinski he needed to stop working out because “Jim is soft.” Kenan Thompson stood up and told the host he needs to “kiss Pam.” “That is what I need to see today,” Thompson said.

Pete Davidson then showed up by Krasinski’s side to explain that everyone was asking about Pam because they’ve been binge-watching “The Office” while quarantining.

“I think they really need for someone to be Pam,” Davidson told Krasinski. “I think we’ve got to give them what they want. Jim, I think you have to kiss Pam.”

Krasinski and Davidson then shared a kiss to cheers from the crowd.

A few sketches down the line, Krasinski finds himself at a friend’s home for a game night with five other pals in a “quarantine pod.”

The friends are all sitting around the living room when the doorbell rings. Their friend Brad opens the door thinking it’s the pizza delivery, but instead it’s an FBI agent arresting Brad for participating in the U.S. Capitol riot on Jan. 6.

“I care about our nation and its Constitution, so I wiped jelly on a statue and put (Nancy) Pelosi’s phone down my pants,” Brad explained to his friends, who asked why he’d do such a thing.

This cycle continued on, with the doorbell ringing and the friends thinking they’re getting pizza when in actuality, it’s more FBI agents arresting them one by one until it’s Krasinski’s turn.

First ‘SNL’ of 2021: Kate McKinnon reminds us that nothing works in America

“Are you Keith Reynolds?” the undercover FBI officer asked Krasinski.

He proceeds to leave with the officer, carrying what appears to be the lectern of House Speaker Nancy Pelosi, mimicking Adam Christian Johnson, aka “Podium Guy” from the riot.

“Good day, all,” Krasinski said as he left.

Back to Top
Close Add post
X
Is Eva Mendes taking a break from Instagram due to a botched plastic surgery?…EntertainmentA few days back, Eva Mendes took to her Instagram recently and explained why she took time off social media. Eva's post comes after some Instagram use…

X
Denzel Washington’s ‘The Little Things’ Leads Box Office Despite HBO Max Debut…EntertainmentWould audiences pay to see a new movie on the big screen if they could watch the same title at home from the comfort of their couch? Prior to the pand…
close