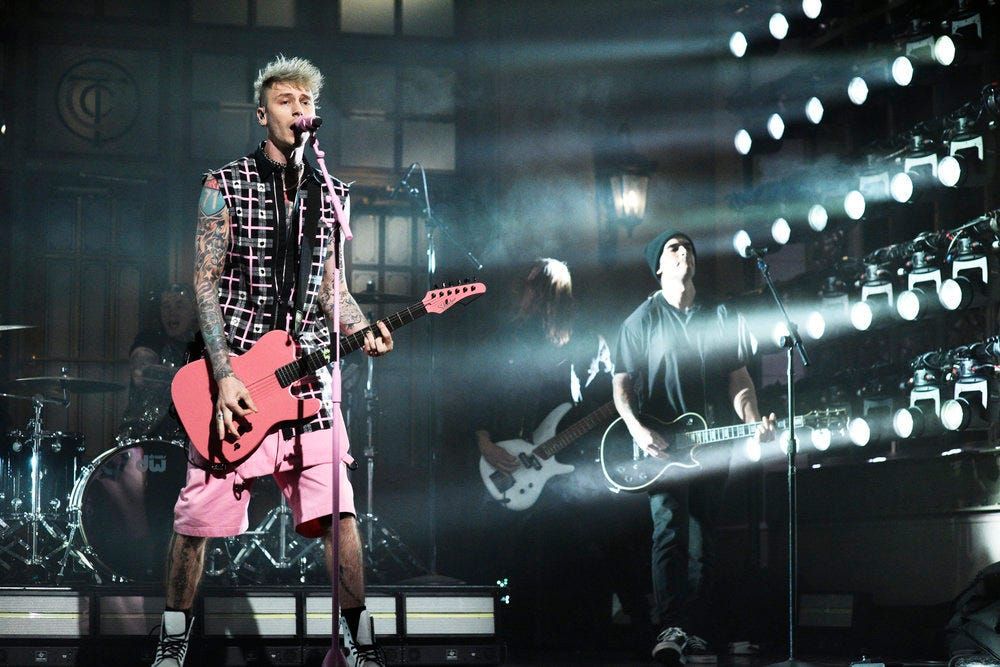 The singer/rapper/actor, 30, proved romance wasn’t dead upon entering 30 Rockefeller Plaza, the iconic New York City building that hosts “SNL,” by literally sweeping girlfriend Megan Fox off her feet and carrying her in, per a video he posted to his Instagram story Saturday.

The two were surrounded by masked paparazzi and fans hoping to snap a photo of the couple, neither of them wearing a mask in the video.

The artist, whose real name is Colson Baker, appeared on the sketch comedy show for the first time Jan. 30, appearing alongside “The Office” and “A Quiet Place” actor John Krasinski, who also made his debut after his original appearance last March was postponed by COVID-19.

Kelly performed “Lonely” and “My Ex’s Best Friend” from his 2020 pop-punk album “Tickets to My Downfall.”

Later on in the evening, he took a fall off the short “SNL” stage during the goodbyes. He squatted down to pick up his friend, “SNL” cast member Pete Davidson, but something went awry and he instead pulled Davidson over his shoulder, sending both men tumbling to the ground below.

Krasinski could be seen stepping forward to help the two up – both appeared to be OK and went on to continue hugging and congratulating their fellow performers.

Fox and Kelly, who starred together in Kelly’s music video “Bloody Valentine,” made their red carpet debut at the American Music Awards last November.

In their first joint interview together last summer, Fox revealed she knew she and Kelly were meant to be once he was cast as her co-star in their upcoming crime thriller “Midnight in the Switchgrass,” she told the podcast “Give Them Lala … With Randall.”

“My heart is yours,” Fox captioned a black-and-white photo of herself with Kelly last summer.

At the time, Fox was married to “Beverly Hills, 90210″ star Brian Austin Green. They wed in 2010 and share sons Noah, 8, Bodhi, 6, and Journey, 4. Rumors about the couple’s split surfaced after Fox was photographed in a car with Kelly, and Green later confirmed the news of their breakup on an episode of his podcast “… With Brian Austin Green” last May.

More ‘SNL’: Kate McKinnon reminds us that nothing works in America in first ‘SNL’ of 2021

And: John Krasinski shares kiss with Pete Davidson, gets arrested for participating in Capitol riot on ‘SNL’