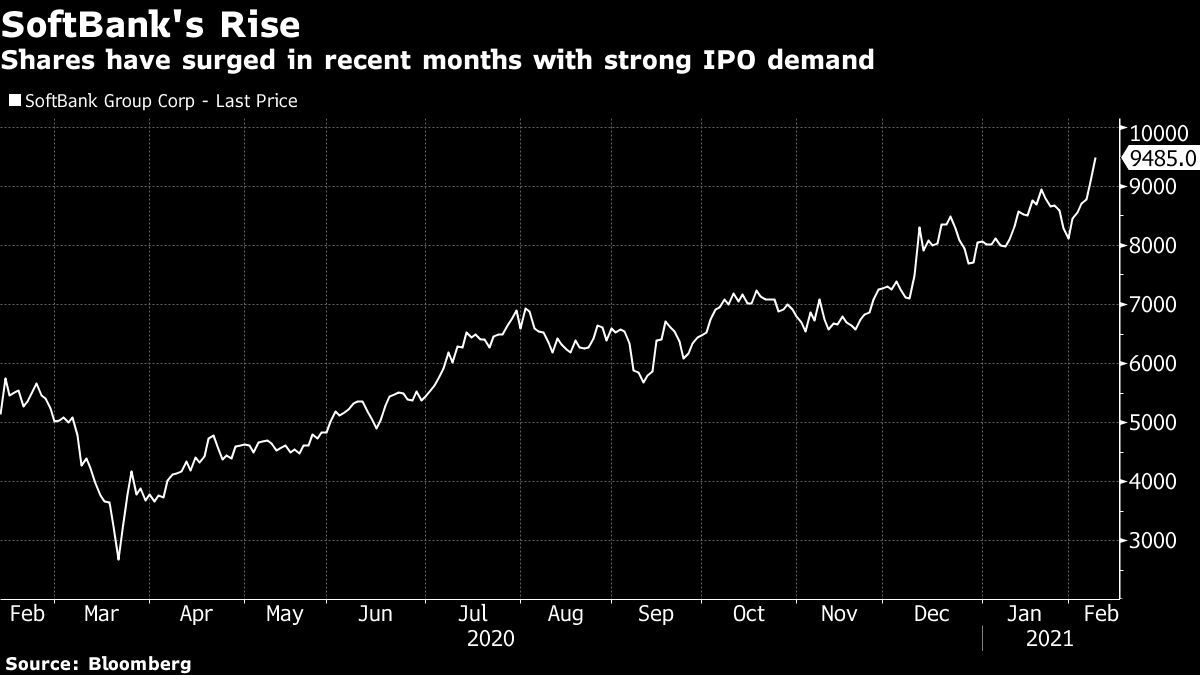 (Bloomberg) — SoftBank Group Corp. reported a record profit in its Vision Fund as a surging stock market lifted the value of its portfolio companies, but founder Masayoshi Son wiped out a significant chunk of those gains with his controversial trading in derivatives.

The Vision Fund reported a 844.1 billion yen ($8 billion) profit in the December quarter, surpassing record numbers set just a quarter earlier. A global rally in technology shares has boosted the value of SoftBank’s stakes in publicly traded firms like Uber Technologies Inc. and paved the way for initial public offerings from the likes of DoorDash Inc.

Those gains, which had been widely expected, were offset by fallout from Son’s decision last year to start dabbling in trading stocks and options. SoftBank posted a 285.3 billion yen derivatives loss in the period. That led to an overall loss in the asset management arm of 113.5 billion yen, up from 85.2 billion yen in the previous three-month period.

“The Vision Fund’s stellar performance in the past few quarters continues to cover for the losses on options trading,” said Anthea Lai, an analyst with Bloomberg Intelligence. “SoftBank could argue those derivatives were for hedging purposes, but Son’s venture into trading is definitely not looking good so far.”

In a presentation to investors after the results, Son focused on his successes. He reprised his argument that SoftBank is like a goose that lays golden eggs, from Alibaba Group Holding Ltd. and Yahoo! two decades ago, to companies like Uber and DoorDash more recently. Some 15 companies have gone public from the Vision Fund so far, he said.“Since the Vision Fund launched, the number of golden eggs is in accelerating mode,” he said, pacing a stage in a white turtleneck sweater and grey jacket. “We are finally in the harvesting stage.”

He said Vision Fund 1 and Vision Fund 2 have invested in a total of 131 companies. In the case of DoorDash, SoftBank invested about $680 million for a stake now worth about $9 billion, he said, while its $7.7 billion investment in Uber is worth $11.3 billion.

The Tokyo-based company had a net income of 1.17 trillion yen in the December period and did not release operating profit figures. At least six more portfolio companies are planning IPOs this year.

“There is a lot of liquidity out there and investors are particularly partial toward tech stocks,” Justin Tang, head of Asian research at United First Partners in Singapore. “At some point the IPO fatigue sets in, but doesn’t seem like we are there yet. For now, the window of opportunity is open for SoftBank.”

After shares plunged in March with the coronavirus outbreak, SoftBank unveiled plans to sell off 4.5 trillion yen of assets to reduce debt and fund buybacks. The selloff included part of its interests in Alibaba, T-Mobile US Inc. and SoftBank Corp., the Japan telecommunications unit. SoftBank also announced a deal to sell its chip designer Arm Ltd. to Nvidia Corp. for $40 billion.

SoftBank held a total of $22 billion of “highly liquid listed stocks” as of the end of quarter, including a $7.39 billion investment in Amazon.com Inc., $3.28 billion in Facebook Inc. and $1.38 billion in Alphabet Inc. The operation is managed by its asset management subsidiary SB Northstar, where Son personally holds a 33% stake.

The investments were accompanied by derivatives that amplified exposure, but SoftBank has been winding down its options strategy amid a backlash from investors. The fair value of SoftBank’s futures and options positions came to little over $1 billion at the end of December, compared with $2.7 billion the previous quarter. Long call options on listed stocks have dwindled to $1.68 billion from $4.69 billion and short call options on listed stocks declined to $238 million from $1.26 billion of value.

Son said that the losses in the asset management arm have swung to a profit of about 100 billion yen since the end of last quarter. But the operations remain in a “test-drive stage,” he said.

Alibaba, Son’s most stark investment success to date and SoftBank’s largest asset, saw its shares plunge about 20% last quarter amid a Chinese government clampdown that scuttled the planned listing of its affiliate Ant Group Co. Founder Jack Ma had all but vanished from public view, prompting investor unease before he resurfaced last month.

Son said he remained in touch with Ma, without giving specific details of their communications. He said Ma likes to draw and shares his drawings with Son via chat; the SoftBank chief also sketches but hasn’t shared any of his work. Son also said he saw the increased antitrust scrutiny of Ma’s businesses in China as part of the country’s natural evolution.

SoftBank’s own sale of Arm to Nvidia is still making its way through the approval process gauntlet. The United Kingdom and European Union are both preparing to launch probes into the deal, the Financial Times reported last week. Son said he remained confident that it will receive a green light at the end.

SoftBank last week filed for two more SPACs, seeking to raise another $630 million. The new SoftBank vehicles, SVF Investment Corp. 2 and 3, will target the same diverse areas of technology as the first, including mobile communications and artificial intelligence, according to filings Friday with the Securities and Exchange Commission.

SoftBank may see between 10 to 20 public listings a year from its portfolio of 164 startups across three different funds, Son said. A typical early-stage venture capital fund might see a third of its bets pay off, but SoftBank’s portfolio of late-stage companies should do better than that, he said. Even WeWork has received SPAC interest, he said.

The billionaire struck a tone that was reminiscent of the days before the WeWork fiasco in late 2019. He said the key to turning “white egg” investments into golden egg hits was “turbo-charging” startups with “overwhelming capital,” more ambitious goals and synergies with other portfolio companies.

Son’s presentation then took a turn for the comical. He flipped to an animated slide of a goose tagged with “AI revolution” text and a line of golden eggs marching out of its backside to Tchaikovsky’s Nutcracker.

“Investment is a rhythm,” Son said. “But please don’t look at this too seriously.”

(Updates with Son’s comments on Alibaba, derivatives from 12th paragraph)