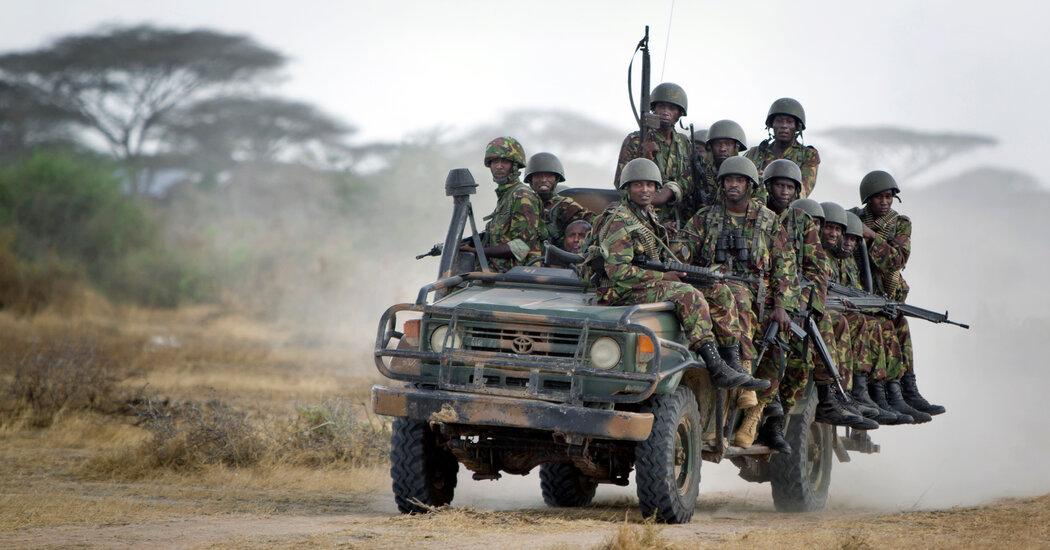 The minister of information said Somalia was breaking off relations because Kenya had violated his country’s sovereignty. In an announcement broadcast on state television, the minister, Osman Dubbe, said Somalia would recall all its diplomats from Kenya and gave Kenyan diplomats seven days to leave the country.

“The federal government of Somalia reached this decision as an answer to the political violations and the Kenyan government’s continuous blatant interference recently in our country’s sovereignty,” said Mr. Dubbe. “The current leadership of the Kenyan government is working on dividing the two nations, who share common interests.”

The rift is the culmination of years of steadily deteriorating relations. It came a day after Kenya’s president hosted the president of Somaliland, the northwestern region that declared independence from Somalia in 1991.

While not internationally recognized, Somaliland has largely avoided the same violence that is tearing at the rest of Somalia and has set up its own military, political administration, and monetary system.

Somalia also accused Kenya of meddling in the election campaign before a parliamentary vote scheduled for later this month as it struggles to transition to a more stable political system with smooth transfers of power.

Somalis were already facing myriad threats, from floods and desert locusts to the coronavirus pandemic, and on Tuesday, opposition groups and their supporters clashed with police in the Somali capital, Mogadishu, as they began protests aimed at pushing the government for a fair vote.

Adding to the uncertainty in the country, the United States announced just over a week ago that it would withdraw its troops from Somalia, raising concerns that the security gains achieved over the past decade against the Shabab, a terrorist group linked to Al Qaeda, could be undermined and the militants could try to claim it as a victory.

Kenya and Somalia share a 430-mile border and have both been dogged by violence meted out by the Shabab. They have been engaged for years in a maritime dispute that is currently being adjudicated at the International Court of Justice at The Hague.

The latest escalation of tensions began in late November, when the Somali Ministry of Foreign Affairs accused Nairobi of meddling in the upcoming elections, recalled its ambassador to Kenya and mandated that Kenyan passport holders apply for visas in advance instead of getting them on arrival.

Somalia at the time said that Kenya was exerting pressure on the leader of the Jubaland state in southern Somalia after he threatened to boycott the parliamentary elections.

As part of the African Union peacekeeping forces in Somalia, Kenya has more than 3,600 troops stationed in the country. A majority of those troops are based in the Jubaland region, which borders Kenya, and in 2012, Kenya helped wrest the capital of Jubaland, Kismayo, from the Shabab.

The election campaign in Somalia has heated up in recent weeks as presidential candidates accused President Mohamed Abdullahi Mohamed, who took office in 2017, of trying to cling to power by using the intelligence services to control the electoral process.

Rather that employing a one-person, one-ballot electoral system, clan leaders select delegates who choose lawmakers who, in turn, elect a president.

With electoral preparations lagging, a standoff has ensued between regional states and the national government. Experts say these tensions could give the Shabab and other militant groups an opening to capitalize on those divisions and disrupt the entire process.

Hussein Sheikh-Ali, a former national security adviser to Mr. Abdullahi and chairman of the Mogadishu-based Hiraal Institute research group, said the rift with Kenya allowed the president to provide a distraction from the troubled electoral process.

While the president was “deliberately picking this diplomatic row with Kenya for electioneering purposes, it will definitely have far-reaching consequences on both regional stability and counterterrorism efforts,” he said.

The decision to sever ties in the region could be especially troubling for the region in light of President Trump’s decision to pull all of the approximately 700 American troops out of Somalia by January, a move that many Somalis say is badly timed and could have far-reaching consequences for stability in the Horn of Africa.

The Shabab is still attacking civilians and military targets and is making millions of dollars annually by extorting local businesses.

Adding to Somalia’s woes, more than 5 million people in the country are in need of humanitarian assistance, according to the United Nations, with flash floods displacing tens of thousands of people and desert locusts threatening crops.

Murithi Mutiga, the Horn of Africa project director for the research organization International Crisis Group, said Tuesday that the neighboring nations should be cooperating to tackle shared challenges, particularly on the security front.

“Both sides appear unable to give diplomacy a chance and are instead locked in an escalatory cycle that serves neither party well,” he said.