Sonakshi Sinha’s home is now a dreamy, artistic space; we have photos! 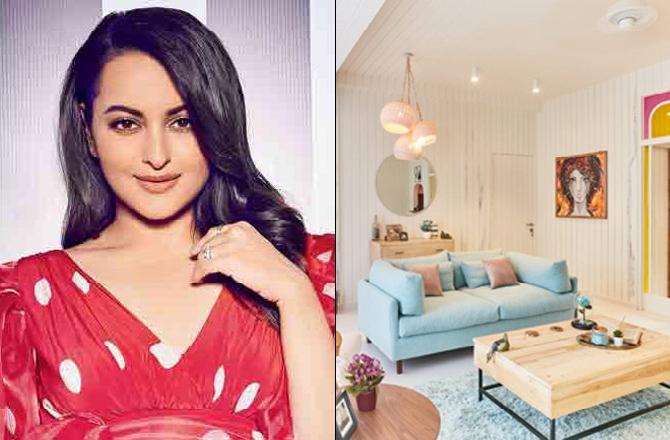 Sonakshi Sinha currently lives with her parents and brothers in their Juhu bungalow, Ramayan. The actress recently got the top floor of the home redecorated for herself. Art director and interior designer Rupin Suchak, who has worked on Alia Bhatt’s office space, has worked on Sona’s new abode, and has done it up in an artistic and minimalistic way.

Speaking about the overhaul, Sonakshi said, “I’m sure everyone who lives with family would understand this, I was craving for my own space. Of course, I have always had a room to myself and all the privacy in the world but really setting up a full floor just for myself is a first and has been an indulgence. I had a very clear imagery of my apartment and Rupin brought it to reality in a heartbeat. In fact, all through the lockdown I have been going through websites and checking out pictures, referencing and researching. When I walked into the apartment after it was done, it felt as if I have been living in it for ages now, it has shaped up on-point.”

Also read: Sonakshi Sinha On Cyber Harassment: They Must Know There Will Be Consequences

Talking about the theme and design of the house, Rupin said, “The foundation of the space is minimalistic and clean. Airy palettes through rich textures and geometric shapes, where every piece of furniture is a statement piece. Sonakshi’s artistic instincts have been carefully extended as an element of design in the entire space. It’s a beautiful, super cosy space with an accommodating vibe.”

Rupin has also collaborated with the biggest names in the film industry like R Balki, Gauri Shinde, Sanjay Leela Bhansali, A R Murugadoss, Anubhav Sinha and Raj & Dk, mentored by Sabu Cyril, he was working as an assistant art director at the outset of his professional career. Some blockbuster films that Rupin has worked on are Shah Rukh Khan starrer RA.One, Agneepath, Tezz and Krrish 3.

On the work front, Sonakshi Sinha will next be seen in Bhuj: The Pride Of India alongside Ajay Devgn. The period drama looks back at the story of 300 women of Madhapar village in Gujarat’s Kutch district, who played a pivotal role in helping India win the 1971 Indo-Pak war.

Also read: Sonakshi Sinha: Want To Be The Heroine You Can Picture In Any Kind Of Film