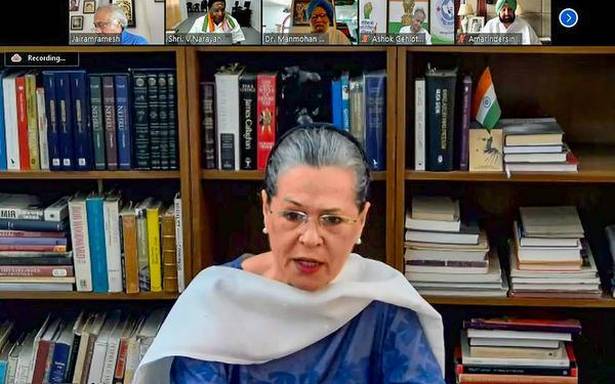 The final phase of consultations for selection of Pradesh Congress Committee (PCC) chief for Telangana will begin on Thursday with the AICC chief Sonia Gandhi to be presented with the report of the AICC incharge for Telangana, Manickam Tagore.

AICC general secretary K.C. Venugopal and a few senior leaders of the AICC are likely to assist Ms. Sonia Gandhi in discussing the content and observation of the report submitted by Mr. Tagore after a four-day hectic consultations with Telangana leaders — including seniors, DCC presidents and also stakeholders at the district-level last week.

Mr. Tagore presented the report to the AICC leadership last week and later flew to Chennai. He is back in New Delhi but it is not clear whether he will be part of the initial discussions to be held between Ms. Sonia Gandhi and other top leaders. He is likely to give his personal view and understanding of the situation only when Ms. Gandhi seeks.

The present TPCC chief N. Uttam Kumar Reddy is likely to give his views on the candidates already finalised as is the general practice in the party.

All the three Congress Members of Parliament – Komatireddy Venkata Reddy and A. Revanth Reddy, apart from Mr. Uttam Reddy, will be in New Delhi on Thursday to be a part of the Congress delegation that is meeting the President of India on the new farm laws.

While Mr. Uttam is the outgoing chief — both Mr. Revanth and Mr. Venkata Reddy — are strong contenders for the post. They will have an opportunity to meet Mr. Rahul Gandhi but sources said they may not get exclusive time to present their cases one last time. A senior leader involved in the process in New Delhi said more or less the name has been finalised but Ms. Gandhi will have the final say going through the report and observations from different sources.