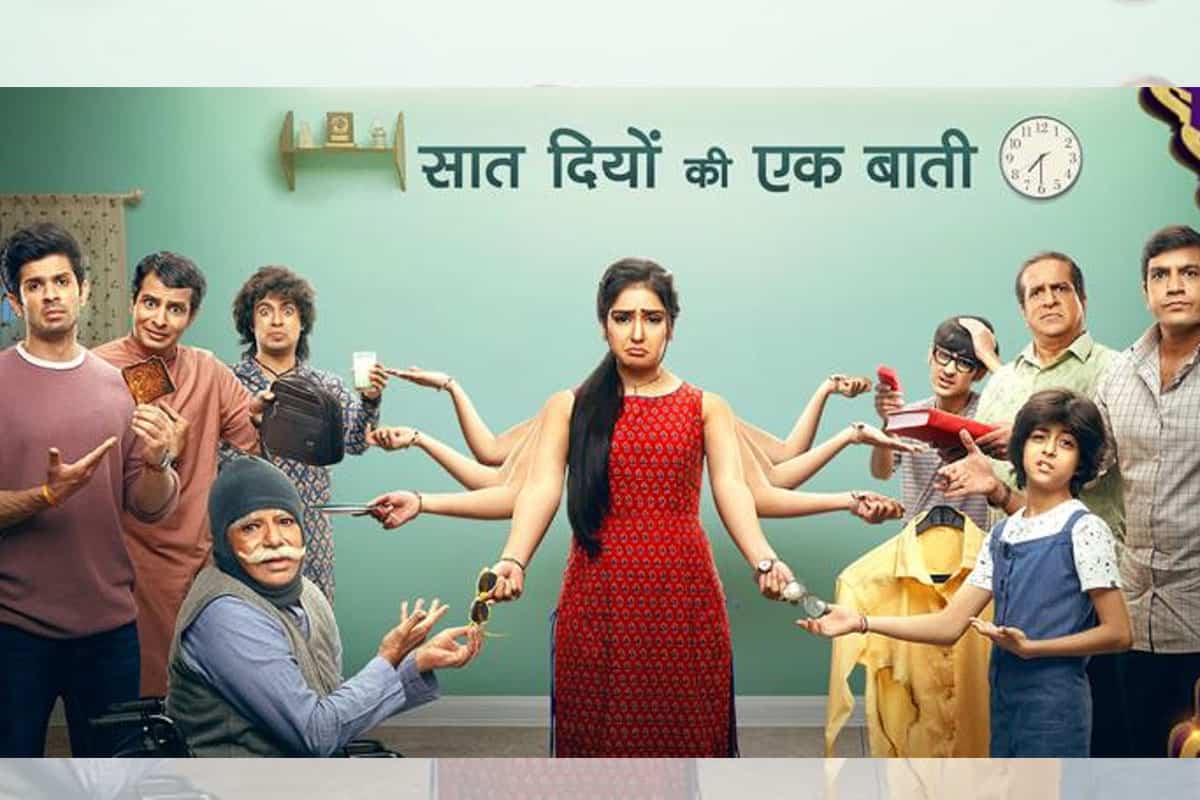 Laughter is the best medicine to take stress away, and Sony Entertainment Television is making sure the audience gets a good dose, with the launch of its new show ‘Sargam Ki Sadhe Satii’. As a channel which has always brought differentiated content across fictional dramas, romance and historical and crime genres, apart from showcasing some of the most celebrated non-fiction reality shows, Sony Entertainment Television is all set to unveil a sitcom that encourages family viewing. Produced by Vipul Shah of Optimystix Entertainment, ‘Sargam Ki Sadhe Satii’ brings forth the Awasthi household with Sargam as the bahu, and her unique sasuraal where she is the only woman among men.

The shenanigans of the Awasthis from Ghaziabad will throw viewers into giggle-fits, while also warming the hearts with relatable situations. Altogether, the Awasthi family will be seen elevating the most mundane situation — ones that viewers will easily relate to — into a whole lot of fun. The makers have chosen an eclectic cast, led by Mere Dad Ki Dulhan actor Anjali Tatrari as Sargam and Kunal Saluja as Aparshakti Awasthi. The rest of the key cast members include names such as Darshan Jariwala, Sanat Vyas, Ojas Rawal, Yash Sehgal, Vishnu Bholwani, Akash Makhija, Yash Sehgal and Krish Chugh.

Sargam Awasthi is empathetic, rational, intelligent, selfless and a leader in essence, but for someone who becomes a homemaker, she faces two key challenges. Firstly, she does not know to cook, a stereotype that is often associated with a ‘good bahu’. Secondly, in her earnest desire to balance everything and to be a Jack of all trades at home, she keeps faltering here and there. Comical twists in the story happen as Sargam tries her best to be The Sadhesatii men include Sargam’s husband Aparshakti Awasthi aka Appu, who is a small-time influencer for the world, but a ‘jugaadu’ hero of his house. An aspiring actor, he is unabashedly disorganized and takes pride in being a multi-tasker.

‘Dadaji’ Anandilal Awasthi, also called ‘sympathy seeker’ due to his unending love for talking about his ‘fake’ ailments, is the oldest, but most youthful member of this mad-house. His favourite topic is his bowel movement!

Dadaji’s son Chhedilal Awasthi, nicknamed Miser-lal (kanjoos) because of his sole mission to save money, is the most responsible member of the family. He owns a saree shop. A control freak who is the interfering kinds, he is a rule-maker for a family of rule-breakers!

Next, meet the ‘Angry Bird’ of the house – Asha Amar Awasthi, who is extremely competitive. He gets instantly riled up if anyone calls him Asha. His anger is the reason why his wife Seema separated from him, but together, they have a son named Akki.

There’s also Alaukik ‘Ajeeb’ Awasthi. As his nickname suggests, he’s the weirdest person around. Not only does he believe in supernatural powers and has an overtly imaginative mind, he also over analyses every situation.

The household has a modern-day ‘brahmachari’ in Aastik Kumar Awasthi. Sargam is the only woman he talks to. Spiritual and a disciplinarian, he subscribes to an app called ‘Duniya Saari Brahmchari’, where he follows advice on ways to remain celibate.

Eklavya Awasthi, whose middle name is ‘Padhaku’, is the youngest, but the smartest member of the house. He is like a human robot and has an answer for everything, turning out to be a nightmare for the Awasthi brothers!

Ashish Golwalkar, Head – Programming, Sony Entertainment Television & Digital Business said, “Television has traditionally been a family viewing medium. Keeping this in mind, Sargam Ki Sadesatii is our little effort to bring every family member, irrespective of age, to laugh together, and forget everyday blues. We are happy about expanding our fiction programming with a sitcom that will make everyone sit up and take notice of its unique storyline, attractive characters and entertaining situations.”

Vipul D Shah Chairman & MD Optimystix Ent, added, “Sony Entertainment Television has always been a frontrunner in telling innovative and experimental stories. Sargam Ki Sadhesatii is an extension of that legacy. We have done comedy shows like Comedy Circus and Saas Bina Sasuraal for the channel in the past, and we are glad about exploring the genre again to elicit laughter from the audience.”

Anjali Tatrari, who plays Sargam said, “After a show with a premise as different as Mere Dad Ki Dulhan, I am truly grateful about landing the chance to play the role of Sargam in Sargam Ki Sadisatii. The concept is interesting, and most of all, it is made to spread humour and happiness. What could be more special for an actor? This is the first time I am working in a sitcom and it has been a great learning experience. Its truly very difficult to make someone laugh and we’ve all put in a lot of effort to make the Awasthis as relatable as possible!”

Darshan Jariwala, who essays Chhedilal Awasthi said, “As entertainers, our focus is always towards reaching out to a larger audience. A clean family entertainer which makes everyone come together, and share a little laughter, always does the job well. I am really happy that Sony Entertainment Television and Optimystix Entertainment decided to launch this light-hearted and fun show amidst such stressful times.”

Get introduced to this unique Awasthi pariwaar and be a part of their roller-coaster ride called life! Tune in to ‘Sargam Ki Sadhe Satii’, starting tonight, Monday 22nd February at 20:30.