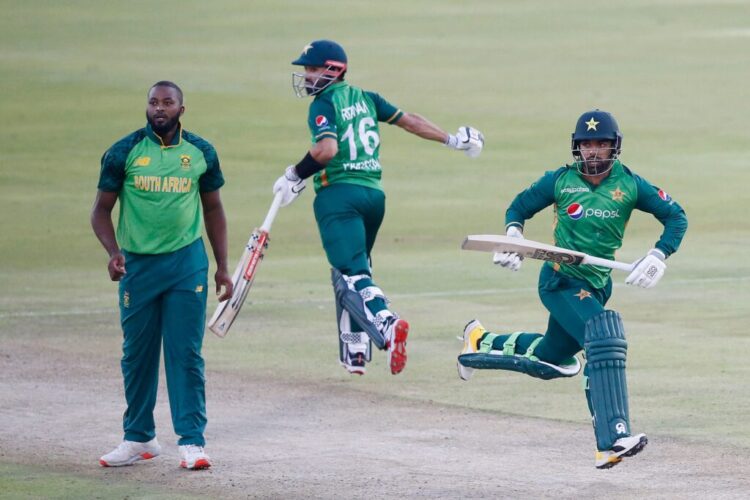 The visitors Pakistan just managed to claim a three-wicket victory in the final-ball thriller ODI against the hosts South Africa and they have taken a 1-0 lead in this three-match ODI series with two matches to go.

After Pakistan captain Babar Azam won the toss and chose to field first, South Africa scored 273/6 in 50 overs. Though Pakistan were once in a very strong position in the chasing, they only managed to reach the target on the final ball of the match after losing seven wickets.

Pacer Kagiso Rabada bowled opener Fakhar Zaman (8) in the third over. But then another opener Imam-ul-Haq and skipper Babar Azam set up a giant partnership for the second wicket which controlled the game.

After making a slow start, both the batsmen gradually normalised their strike rates to control that chasing. While Babar scored fifty in 61 balls, Imam reached the half-century mark in 63 balls. Both continued their strong batting and set up the 150+ partnership for the second wicket.

In the 32nd over, captain Babar completed his 13th ODI hundred where he reached in 103 balls with a four. But on the very next ball, Anrich Nortje dismissed Babar for 103 runs off 104 balls (17 fours). From that situation, South Africa suddenly returned to the game, majorly thanks to Nortje’s incredible bowling performances.

In his next over, Nortje took the wicket of opener Imam-ul-Haq, who scored 70 off 80 balls with the help of 3 fours and only six. Then the Proteas pacer sent back the debutant Danish Aziz (3) and Asif Ali (2) in his next two overs.

While the visitors were once batting on 186/1, they were suddenly struggling on 203/5. Mohammad Rizwan and Shadab Khan took the control of the game from that situation and built up the crucial 53 runs partnership for the sixth wicket.

When Pakistan were moving towards the easy victory, Andile Phehlukwayo got Rizwan for 40 runs off 52 balls (4 fours).

The dramatic ODI entered to the final over where the visitors required only three runs to win and Phehlukwayo came to bowl the final over. But after the dismissal of Shadab (33 runs off 30 balls; 2 fours and only six) on the first ball of that over, the Proteas pacer delivered three dot balls to Faheem Ashraf (including his third delivery hit Faheem’s helmet) that put back massive pressure on the Pakistan side.

But in the final two balls of the match, Faheem (5*) took a double and a single respectively to successfully finish the game just on time.

Pakistan bowlers provided a great start as they got three wickets in the first powerplay where South Africa scored 43/3. Despite some good shots in the early overs, both openers Aiden Markram (19) and Quinton de Kock (20) were dismissed by Shaheen Shah Afridi in the seventh over.

In the next over, Mohammad Hasnain got the wicket of skipper Temba Bavuma for just one run. In the 15th over, Heinrich Klaasen lost his wicket as Faheem Ashraf dismissed him. At that time, the hosts were struggling on 55/4.

But then Rassie van der Dussen and David Miller handled the hosts’ innings really well and controlled that innings. While van der Dussen scored 50 off 80 balls, Miller completed his fifty in 52 balls. They had the 116 runs partnership for the fifth wicket as Miller was dismissed by Haris Rauf just after completing his half-century as the Proteas cricketer lost his wicket on 50 off 56 balls (4 fours).

However, van der Dussen continued his impressive batting and he completed his first international century in 123 balls, which he reached in the 47th over with a single. But on the very next ball, Haris Rauf dismissed Andile Phehlukwayo for 29 runs. But before that wicket, van der Dussen and Phehlukwayo had the 64 runs partnership for the sixth wicket.