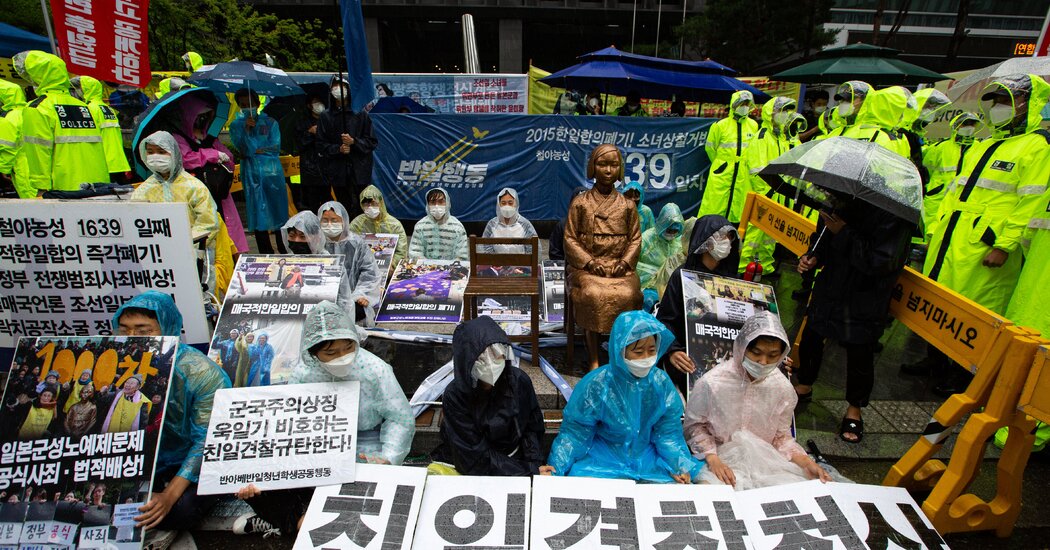 SEOUL, South Korea — A South Korean court on Friday ordered the Japanese government to pay $91,800 each to 12 Korean women kept as sex slaves for Japan’s troops during World War II. The ruling, the first of its kind in South Korea, is likely to aggravate the already chilly relations between Washington’s two key allies in Asia.

“The court recognizes that the accused committed illegal acts and that the plaintiffs suffered extreme psychological and physical pain hard to imagine,” Judge Kim Jeong-gon said in his decision.

The ruling is largely symbolic; the Japanese government said on Friday that the Korean court had no jurisdiction over Japan and that it would “never accept” the order. But the decision could further complicate Washington’s efforts to bring South Korea and Japan closer together to counter North Korea’s nuclear threat and China’s growing military influence in the region.

Though South Korea and Japan face similar threats from North Korea, there is a deep-seated mistrust between the two countries rooted in Japan’s colonial rule of Korea, from 1910 to 1945​​.​ The issue of the Japanese Army’s use of Korean and other women as sex slaves is the most emotional historical dispute keeping Seoul and Tokyo apart.

“This is a landmark ruling,” said an advocacy group in Seoul that speaks for the women who filed the lawsuits, the Korean Council for Justice and Remembrance for the Issues of Military Sexual Slavery by Japan.

A ruling on another case, in which 11 former sex slaves are seeking similar compensation from Tokyo, is scheduled for Wednesday.

The advocacy group said that the lawsuits had been filed as part of the women’s attempt to confront the Japanese government, which they accused of whitewashing the history of wartime sexual slavery by its military.

“The Japanese government should honor the ruling and pay the compensation immediately,” the group said, adding that many of the women had died since filing the lawsuits.

The plaintiffs in the civil lawsuit decided on Friday filed their case with the Seoul Central District Court in 2013. They accused Japan of coercing or luring them into sexual slavery in wartime brothels run for the country’s troops. Each demanded 100 million won ($91,800) in compensation. Only five of the original plaintiffs are still living.

Historians say that tens of thousands of women, many of them Korean, were in the ​frontline ​brothels​​ from the early 1930s until 1945.​ It was not until 1991​, when a South Korean woman named Kim Hak-soon made the first public testimony on her painful​ wartime​ experiences, that the issue went global. ​A ​total of 2​40 women have ​since ​come forward in South Korea, but ​only 16 — all in their 80s and 90s — are still alive.

Tokyo did not participate in the trial, refusing to accept notices from the South Korean court informing it of the legal challenge and asking for a response. The court made the notices public online​ and held its first hearing in April of last year.

Speaking with reporters on Friday, Katsunobu Kato, chief cabinet secretary to Prime Minister Yoshihide Suga of Japan, said that the court’s decision was “extremely regrettable” and that the Japanese government had formally protested to its South Korean counterpart.

“We have repeatedly expressed that the Japanese government is not subject to Korean jurisdiction under the principle of exemption from sovereignty under international law,” Mr. Kato said.

In its ruling, the court said that it could not accept the immunity claim because the case involved “anti-humanity acts systematically planned and perpetrated by the accused.”

Yoon Ji-hyun, director of Amnesty International Korea, said that the ruling was significant because it was “the first time a South Korean court held the Japanese government responsible for the sexual slavery by the Japanese military and opened the way to restore justice for the survivors.”

The countries previously tried to close the chapter on World War II sex slaves ​when Seoul and Tokyo announced in December 2015 what they called a “final and irreversible” settlement.

In the deal, Japan expressed responsibility and apologized anew to the ​women, promising to set up an $8.3 million fund to help provide old-age care. Washington hailed the deal. But some of the women have since rejected it, saying it failed to specify Japan’s “legal” responsibility or to provide official reparations.

Kazuhiko Togo, a former Japanese diplomat who is now director of Kyoto Sangyo University’s Institute for World Studies, said that 36 of the 48 women who were alive at the time of the 2015 deal accepted payments from the funds.

“On the one hand, my position is that as a perpetrator country, at least we need to have several moral obligations to remember, and from that point of view ‘enough’ or not is not a matter which we the perpetrator country should judge,” Mr. Togo said. But legally, he added, “I don’t think the Koreans have the right to pronounce the Japanese guilty.”

Mr. Togo said that if the Korean courts were to try to confiscate Japanese government assets to fulfill the judgment, “Korea and Japan will not be able to maintain normal diplomatic relations.”

He added: “I deeply think this is not in the interest of Korea or of Japan.”

Leif-Eric Easley, a professor of international studies at Ewha Womans University in Seoul, said that Tokyo would deem the ruling “an escalation in a pattern of weaponizing history and breaking international agreements.”

He added, “The economic fallout will be difficult to gauge during the pandemic, but the diplomatic implication is to complicate the incoming Biden administration’s plans for trilateral cooperation to deal with North Korea and China.”

​Relations between South Korea and Japan had already been frosty for years over another issue from the colonia era: wartime slave labor. In 2018, South Korea’s Supreme Court ruled that Japanese companies must compensate Korean men who had been forced into labor during World War II. Japan vehemently denounced the ruling.

Japan accused South Korea of undermining the 1965 treaty that established diplomatic ties between the two nations, under which Japan provided South Korea with $500 million in aid and cheap loans. Tokyo insisted that all claims arising from its colonial rule, including those involving forced laborers and so-called comfort women, a euphemism for the sex slaves, had been settled by the treaty.

In 2019, Japan imposed export controls​ on South Korea in a move widely seen as retaliation for the 2018 Supreme Court ruling. ​ The trade dispute soon spread to security ties, with South Korea ​threatening to abandon an intelligence-sharing agreement​ with Tokyo that Washington considered vital to maintaining cooperation among the three nations.

Seoul did not follow through with its threat. But on-and-off attempts by both governments to narrow their differences have gone nowhere. The ruling on Friday will most likely add to the bad blood​.