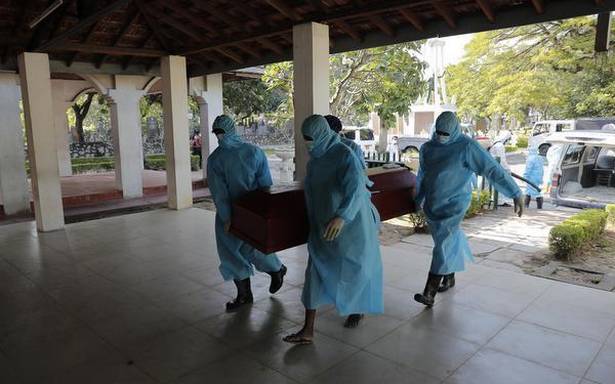 The 20-day-old baby, who died of COVID-19, was cremated against his family’s wishes.

The last week has been the worst yet for N.F.M. Fahim’s family residing in Colombo. The 38-year-old and his wife lost their new-born to COVID-19 on December 8, and even before they could process the devastating news from the hospital, authorities were ready to hand over the baby’s ashes to them.

“I did not have the heart to take the ashes. We were already dealing with the shock of losing our son who was just 20 days old, and then to be told he was cremated, which goes against our religious practice, was just unbearable,” said Mr. Fahim, breaking down. He last saw his son on December 7, the night he rushed him to a leading government hospital for children, after noticing the baby’s congestion-like symptoms.

In barely two days, baby Shaykh was in the news as Sri Lanka’s youngest victim of the virus, cremated against his family’s wishes because of the government’s policy of allowing only cremation, based on unsubstantiated claims that bodies of COVID-19 victims could contaminate groundwater. “We were repeatedly told the cremation has to be done within 24 hours,” Mr. Fahim recalled.

Ever since COVID-19 struck Sri Lanka in March, the government has been enforcing cremations for all victims, despite the World Health Organization saying bodies “can be buried or cremated”. The island is witnessing a surge in cases — totalling over 32,000 now — since the second major outbreak in October.

Making up about 10% of the country’s 21 million-strong population, Sri Lanka’s Muslim community has been urging the government to revise its pandemic guidelines that go against Islamic religious beliefs, but to no avail. The UN and international human rights organisations urged Sri Lankan authorities to reverse the policy, but the government’s rules remain unchanged. Opposition parliamentarians raised the issue in the House, while a dozen activists and politicians petitioned the Supreme Court in May, challenging the government’s ‘cremations only’ policy. On December 1, the top court rejected all petitions.

The Muslim community is losing hope, Sri Lanka Muslim Congress leader and opposition legislator Rauff Hakeem told Parliament recently. “The community is getting ahead with a civic resistance programme of refusing to accept the bodies. This is a traumatic situation for the entire community… the trauma aside, this is going to have serious implications for generations to come,” he said, “pleading” with the government to revise its guidelines.

Many in Sri Lanka see the government’s policy mandating cremations as part of a series of attacks targeting Muslims over the last few years. According to Farzana Haniffa, professor, Department of Sociology at the University of Colombo,the Rajapaksa administration has cultivated a position in relation to its base, where the demonising of Muslims is needed, and has to be maintained. “The denial of Muslims’ burial rights is just yet another step in that pursuit,” she told The Hindu. “It is unfortunate that the government, with so much power and such a huge mandate, sees the need for this,” Ms. Haniffa said. Pointing to the mobilisation of a section of the intelligentsia, including doctors and scientists, to project the Muslim community as one bereft of civility or scientific temper, she said: “The complicity of the intellectual elite in this messaging is troubling.”

However, the recent passing and forcible cremation of baby Shaykh, has set off a silent protest. Dozens of Colombo residents tied pieces of white cloth on the gates of the crematorium this weekend, expressing solidarity, but they had been removed on Monday reportedly by the police, according to a tweet from Ali Zahir Moulana, a former parliamentarian. “This is an overt attempt by the Government to stifle peaceful civil disobedience by well-intentioned members of public, & a clear indication of suppression,” he said on Monday afternoon.

As calls to stop mandatory cremations grew louder over the past week, Prime Minister Mahinda Rajapaksa directed officials to find land suitable for burials, local media reported. There has been no official announcement on the development.

Meanwhile, neighbouring Maldives, an Islamic country of nearly 400,000 people, has stepped in to help. Maldivian Foreign Minister Abdulla Shahid said on Monday in a tweet: “On special request from Sri Lankan President @GotabayaR, President @ibusolih is consulting stakeholder authorities of the Government of Maldives to assist Sri Lanka in facilitating Islamic funeral rites in the Maldives for Sri Lankan Muslims succumbing to COVID-19 pandemic.”

The burial rights of Muslims have drawn considerable attention within Sri Lanka, especially on social media, but not all responses are sympathetic. “You see many younger people expressing utter insensitivity to the fact that people could have a different set of values in regard to the dead, or how they grieve their loss and mourn. This is another sad comment on the state of the country. The government’s refusal of burial rights to Muslims is similar to them refusing Tamils the right to mourn,” Ms. Haniffa said, observing that it was unlikely that the government would achieve the peace and prosperity they promised using these dated tactics “of inciting ethnic animosities”.

Six years after Mr. Fahim and his wife had their first child, baby Shaykh was born last month, bringing much joy to the family in an otherwise stifling pandemic year. “I drive a rented three-wheeler to make a living. We were struggling financially, but our baby boy made us so happy,” Mr. Fahim told The Hindu. “It is not easy to talk about our child, but I have put my feelings aside to speak up, only in the hope that what happened to our son doesn’t happen to even one more person. Our wounds will begin to heal only when they put an end to forced cremations.”