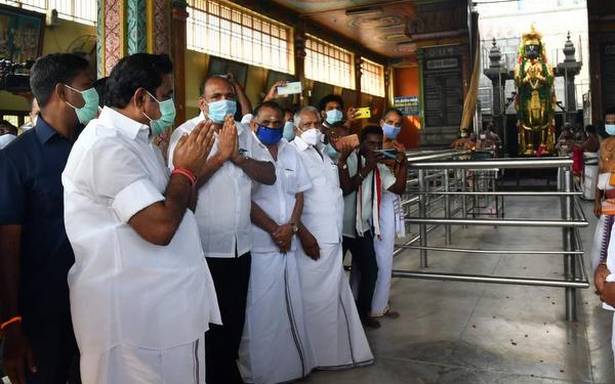 Only to ensure that people affected by the COVID-19 pandemic celebrate Pongal happily, has the government announced a cash gift, the CM said

At a reception organised by the AIADMK at Attayampatti in Namakkal, Mr. Palaniswami said that poor people are affected due to the COVID-19 pandemic and the government had announced a Pongal cash gift of ₹2,500 and Pongal hampers to all rice cardholders in the State. “Only because the scheme has received overwhelming response from the people and the AIADMK will earn a good reputation among the people, he (Stalin) is doing so (levelling charges),” he alleged.

The CM said that the government distributed ₹1,000 cash to card holders last year but to stop the distribution, the DMK had gone to the court. DMK disliked doing good things for the people, he claimed. “Only to ensure that the affected people celebrate Pongal happily, has the government announced a cash gift”, he said.

According to him, former chief ministers, M.G. Ramachandran and Jayalalitha always thought that poor people should live happily and hence the present AIADMK government is fulfilling their thoughts by giving cash gifts. He appealed to people to cast their votes for ‘Two Leaves’ in the next Assembly elections.

The CM offered prayers at the Anjaneyar Temple in Namakkal and launched the party’s election campaign titled, “Vetrinadai Podum Tamizhagam” (Tamil Nadu is on a success track).

The CM also interacted with traders and vendors at the temple premises during which Minister for Electricity, Excise and Prohibition P. Thangamani, Minister for Transport M.R. Vijayabaskar and Minister for Social Welfare and Nutritious Noon Meal Programme Dr. V. Saroja and MLAs were present.