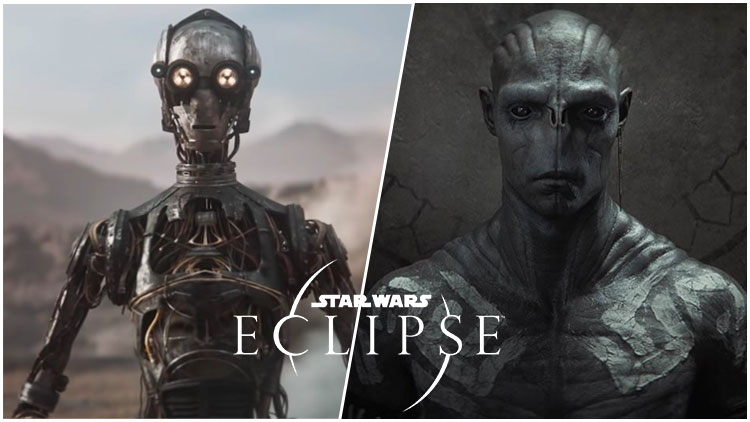 In the clip, we see a grey colored alien beating an instrument while the sun gets darkened by the eclipse. After which, we see a starship crashing in an unknown planet. It is not confirmed but the planet could be Jedha or some other. This could be a planet which fans have seen in the Clone Wars.

Then we spot a familiar face of Jedi Grand Master Yoda in the Jedi Council room. But that’s not all. We also get a glimpse of C3PO, in his open chassis form as in the Phantom Menace. Followed by this, we witness two Jedi duelings or sparring with each other. And see a forest planet much like Kashyyyk.

From here on, new character faces start appearing. Starting with an alien belonging to the same species as Nute Gunray. Two force users, one Jedi carrying a blue lightsaber and the other probably a Grey Jedi with the yellow lightsaber. We also see a female character after which an army led by an alien. And a space battle. The video ends with the Grey Alien revealing his face.

What is Star Wars Eclipse?

It seems that Star Wars Eclipse is a new Star Wars game, developed by Quantic Dream and Lucasfilm Games. Although the trailer shown does not contain gameplay, it is a brand new action-adventure game with multiple branching narration. The game is set during the High Republic Era. And is still in its “early development,” release date is not announced yet.

Quantic Dream is the same studio which developed award-winning Detroit: Become Human. This is why we have high expectations for the Star Wars game as well. Curiously, we have no clue at this phase of which platforms Star Wars Eclipse will be available on. Still, we can likely expect PC, PS5 and Xbox Series X releases, but it seems less likely that it’ll hit PS4 and Xbox One. Ubisoft’s Massive Entertainment is working on an open-world Star Wars game.

How to get the Fan Kit?

To get the fan kit, you can check out the official Star Wars Eclipse site, scroll down and download the kit on your device.

I don’t play star wars games but this article made me rethink whether to play or not,
Worth a read and definitely gonna try to get the fan kit.

Hi Sanket! Glad to hear you love the article.