Home General Stateless, She Became the Face of a Largely Invisible Plight

Stateless, She Became the Face of a Largely Invisible Plight 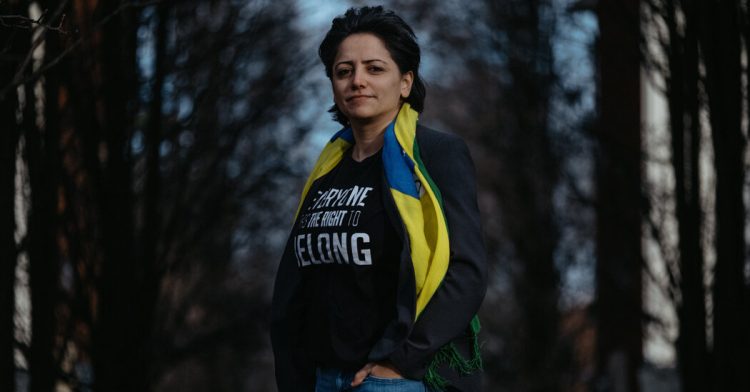 RIO DE JANEIRO — The subject was taboo during her childhood in Lebanon, whispered about but never discussed openly.

It came to a head when Maha Mamo was 15 and, furious to miss out on a Girl Scouts trip abroad, she confronted her parents.

It was then that Ms. Mamo learned that she and her two siblings had been born stateless, ineligible for citizenship in any country, and deprived of the basic rights that come with it — including the passport needed for her Scouts trip.

Lebanon does not automatically grant citizenship to the children of immigrants who are born there, like she and her siblings were, her parents explained. And documents from their own home country, Syria, were out of the question, her mother and father said, because their interfaith marriage was illegal there.

Ms. Mamo’s search for a homeland led her to Brazil, where in 2018 she and her sister, Souad, became the first stateless people to become citizens under a new immigration law in the country.

Over her yearslong quest, Ms. Mamo, who recently published a memoir about her ordeal, has become the most visible formerly stateless person and a singularly effective advocate for the plight of millions who remain in limbo.

Years before she got a passport, Ms. Maho, now 32, traveled the world using a special travel document issued to some stateless people, delivering impassioned speeches at United Nations conferences and other events.

“Thanks to her public appearances and social media presence across different continents,” said Melanie Khanna, the head of the statelessness section at the United Nations refugee agency, “thousands of people have understood how someone can wind up stateless through no fault of their own, and how devastating the consequences of that are.”

The number of people around the world who lack a nationality is difficult to assess. There are at least 4.2 million stateless people in the 79 countries that report them, but the U.N. agency believes that to be a severe undercount and that the problem affects many millions more.

Statelessness arises from a variety of situations, including redrawn borders, discriminatory laws that prevent women from passing on their nationality to a child, births that go unregistered, or the mass expulsion of an ethnic group.

Ms. Mamo’s journey to becoming a passport-bearing, globe-trotting activist and author who delivers pitch-perfect speeches, including a TED Talk in Geneva, began with years of despondence.

Life in Lebanon felt stifling for Ms. Mamo and her two siblings. Her parents worried whenever the children crossed checkpoints in war-ravaged Beirut, where Syrians were often treated with hostility.

Money was tight, she said. Her mother, who had been a nurse in Syria, didn’t work in Lebanon. Her father used his truck to earn money as a mover. The children got new clothes twice a year — during Christmas and Easter.

Since the children had no documents, their parents had to work miracles to get them enrolled in school, pleading with officials for waivers and favors. When she was old enough to consider college, Ms. Mamo found only one university willing to take her, which meant giving up her dream to study medicine.

She pursued the longest of long shots, including adoption by a friend’s parents. The Mamo family paid a small fortune to people who said they knew someone who knew someone who could make them Lebanese.

“We did everything you can imagine,” she said. “We lost a lot of money paying people who said they had connections.”

Her siblings seemed resigned to their fates. But Ms. Mamo decided she would not rest until she found a way out. She made a list of all the embassies in Lebanon and sent each one an email describing the missed opportunities and the dreams she harbored.

For years, most embassies ignored her and some sent curt replies. In 2013, Mexico’s ambassador wrote back, offering to help find a way to get her there.

That possibility prompted Ms. Mamo’s sister, Souad, to try her luck as well. She sent her own barrage of emails to diplomatic missions. In March 2014, Brazil’s embassy extended Souad, and, subsequently, Ms. Mamo and her brother Eddy, an invitation to travel to Brazil under a special visa for Syrian refugees.

Ms. Mamo knew next to nothing about Brazil. “The only thing we knew was it was an insecure country,” she said.

With the audacity that had gotten her that far, Ms. Mamo scrolled through Facebook to see if she could find friends who had been to Brazil and found that a Girl Scout from her former troop had once stayed briefly with a Brazilian family.

She sent a message to the family introducing herself. To her surprise, the family invited her and her siblings to stay at their home in the southeastern city of Belo Horizonte.

In Sept. 2014, when she was 26, Ms. Mamo boarded a flight out of Lebanon — after paying the government thousands of dollars in fines for overstaying her visa.

Once in Brazil, she was initially dazzled by the size of the country and the hospitality she encountered. But soon, it dawned on her there was no clear pathway to legalize her immigration status — a fact no one at the Brazilian embassy in Beirut had made clear.

In March 2015, an interview she gave for a Brazilian television program about statelessness sparked her career as an activist. Officials at the United Nations, which the previous year had launched a campaign urging countries to enact policies to eliminate statelessness, took note.

They helped Ms. Mamo obtain a travel document, and soon she was flying across the world, telling her story and urging lawmakers to create legal avenues to citizenship for the untold millions without a nationality.

The United Nations created two conventions regarding the rights of stateless persons after World War II, but they got relatively few signatories.

That meant even countries with a history of welcoming immigrants, including Brazil and the United States, lacked a pathway for stateless people who aspired to become citizens.

Ms. Mamo was getting weary of putting so much work and time into the activism that was not bringing her and her siblings closer to a resolution of their statelessness. Then Eddy, her brother, was killed during a robbery attempt near their home in June 2016.

The death generated widespread news coverage in Brazil and gave Ms. Mamo’s activism urgency. Officials in the capital, Brasília, took note. In 2017, when lawmakers updated the country’s immigration code, they included a new provision to provide stateless people a streamlined path to citizenship.

In June 2018, Torquato Jardim, who was then the minister of justice, invited Ms. Maho and her sister to the capital for a ceremony in which they became the first stateless people designated as eligible for citizenship in Brazil.

A few months later, Brazilian officials in Geneva surprised Ms. Maho with her citizenship papers when she finished one of her trademark statelessness speeches, which she often delivers with a Brazilian flag draped over her shoulders.

United Nations officials credit Mr. Maho’s persistence with putting the issue on the political agenda in Brazil, which is among only 23 countries that currently have legal pathways to absorb stateless people.

Ms. Maho said she has grown to feel viscerally Brazilian, feeling at home in a nation with such a broad amalgam of races, creeds and countries of ancestry. “Whenever they hear my story, no one is going to ask me: Are you Muslim, are you Christian?” she said. “They value you simply for being a human being.”

In December 2018, during one of the first trips she took using her Brazilian passport, Ms. Maho found herself clearing customs in Paris just as a flight from Beirut landed.

She couldn’t help noticing that immigration control officers closely inspected the passports and visas of the Lebanese passengers, and asked lots of questions.

Unlike the Lebanese, Brazilians don’t need a visa for France. When she presented her passport, she was welcomed with a warm smile — no questions asked.

“I was like, oh my God, I love my Brazilian passport.” she said. Watching the Lebanese getting more scrutiny, she couldn’t shake a bit of schadenfreude. “What comes around goes around,” she said.