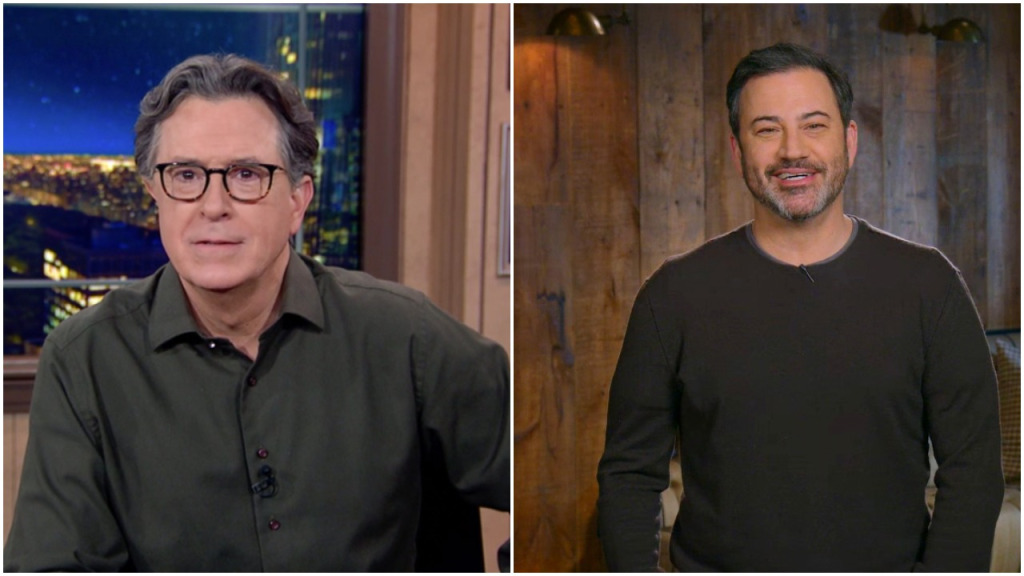 It was all smiles in late-night as Stephen Colbert and Jimmy Kimmel celebrated the inauguration of President Joe Biden and Vice President Kamala Harris.

The Late Show was live tonight with Colbert almost giddy as he admitted that today was “extremely emotional” and that he cried a lot during the swearing in ceremony.

“You did it. You survived the last four years and your reward is a shiny new old president,” he joked. But he said that he had “zero gloat” in him and was rather filled with “enormous relief”.

“It’s so nice to have a President with a soul again. The previous one sold his to the devil and didn’t even get Georgia out of the deal,” he said. “It was moving to watch Vice President Harris be sworn in by Supreme Court justice Sotomayor and it got a very excited reaction from Joe Biden. That’s refreshing. In just two short weeks that dais has gone from alt-right to all right,” he added.

Similarly, Jimmy Kimmel was in positive spirits. “I have to imagine this is what it feels like when the oncologist calls and tells you the tumor is benign,” he said. “Today, this country showed the world that there is no My Pillow large enough to smother our democracy.”

Colbert and Kimmel both paid tribute, and gently made fun of Lady Gaga and J.Lo, who both sang at the event. “Two weeks ago, a bunch of dangerous imbeciles with Donald Trump flags tried to overthrow the government. Today, on that very same spot, we had the national anthem, sung by Lady Gaga. To paraphrase Michelle Obama, when they go low, we go J.Lo,” said Kimmel.

Both hosts also praised National Youth Poet Laureate Amanda Gorman for her positive message. “It was a beautiful ceremony; we got to hear a poem that wasn’t boring, from a brilliant 22-year-old from here in Los Angeles named Amanda Gorman,” said Kimmel.

“Beautiful stirring words and a nice change from the last administration. The closest thing they came to poetry was high coup,” added Colbert.

Bernie Sanders, a man of a thousand memes, was also namechecked for the somewhat unfortunate shot of him looking grumpy at the event. “Bernie Sanders was one of the first people there. He showed up holding a manila envelope. It looked like he had an appointment at the DMV. There was a lot of discussion about what Bernie was wearing, which, as you can see, was his most festive mittens, and a mask he found on the floor of his wife’s Subaru. Sadly, Senator Sanders had to duck out early when his neighbor Larry called to say he found his hat,” joked Kimmel.

Colbert highlighted the fact that he wasn’t wearing a hat. “Notice the one part of his body that’s not covered. Bernie, what are you thinking? Don’t you know that 99% of your body heat escapes out of the top 1%.”

The former host of The Colbert Report, clad in a jacket for the first time in a little while, got some mileage out of his aviator impression of the new President. But, ultimately, he looked overjoyed at the prospect of the next four years. “However we fix this country, it’s not the new administration’s work alone, it’s up to all of us as it always is in whatever way we can and President Biden, Vice President Harris, you have our prayers, our best wishes and our every confidence,” he added.