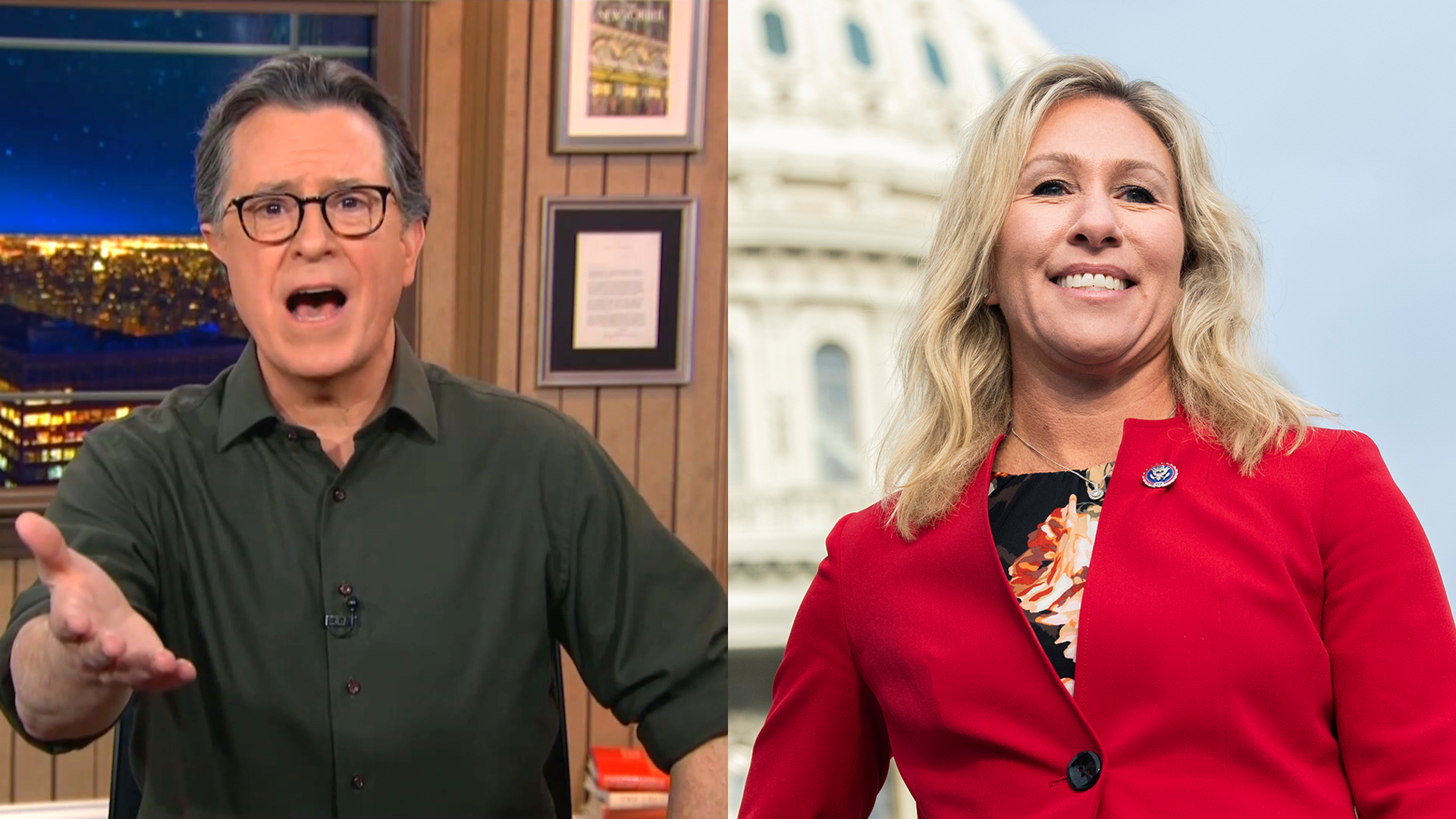 A lot of conspiracy theories endorsed by Representative Marjorie Taylor Greene (R-GA) have come to light recently, and on The Late Show With Stephen Colbert Thursday night, Colbert ruthlessly mocked her many wild claims.

In the past, Greene, a QAnon believer, supported claims that the school shooting in Parkland, Florida was a “false flag planned shooting,” and “liked” a post that described the shooting at Sandy Hook elementary, which killed 20 children, as being staged. Greene also claimed in a 2017 video that the Las Vegas shooting that killed 58 people was a set-up by activists to promote gun control.

Earlier this week, a video resurfaced of Greene harassing Parkland shooting survivor turned anti-gun activist David Hogg. After playing the video, Colbert said, “Okay, that looks stupid and cruel, but that could just be a false flag operation by antifa to get us to think Marjorie Taylor Greene is a child-harassing psychopath.”

Greene has also supported violence against prominent Democrats, including execution. Greene “liked” a comment about putting a “bullet to the head” of House Speaker Nancy Pelosi, and in 2018 when a commenter asked about hanging Hillary Clinton and Barack Obama, Greene replied, “Stage is being set. Players are being put in place. We must be patient. This must be done perfectly or liberal judges would let them off.”

“Holy haul ‘em to The Hague, Batman. She’s not even trying to be discreet,” Colbert said in response. “At least mobsters use coded language.”

“Oh, come on!” Colbert exclaimed. “The lady who denies school shootings is in charge of education? Why not just appoint Surgeon General Joe Camel? ‘Warning: Smoking can make you dangerously cool.’”

Colbert had some fun with a 2018 conspiracy in which Greene wrote the California wildfires were caused by lasers from the sky, or as she put it, “…oddly, there are all these people who have said they saw what looked like lasers or blue beams of light causing the fires.”

“That’s an embarrassing way to admit you’ve never heard of lightning,” Colbert said before continuing as Greene, “‘And then the socialist lizard men shot jagged laser things out of a cloud. And that angered the sky so it went roar and the sky wept. And then, thanks to QAnon, the sky stopped crying and a rainbow appeared, and we shot it with our guns because rainbows are gay. The defense rests.’”

Greene also wrote that a vice chairman at “Rothschild Inc.” may have been involved with the “lasers” causing the wildfires, leading some to call her antisemitic.

The Late Show With Stephen Colbert airs weeknights at 11:35 p.m. on CBS.

Check out what Alexandria Ocasio-Cortez said about the House GOP: ‘There are legitimate white supremacists’: