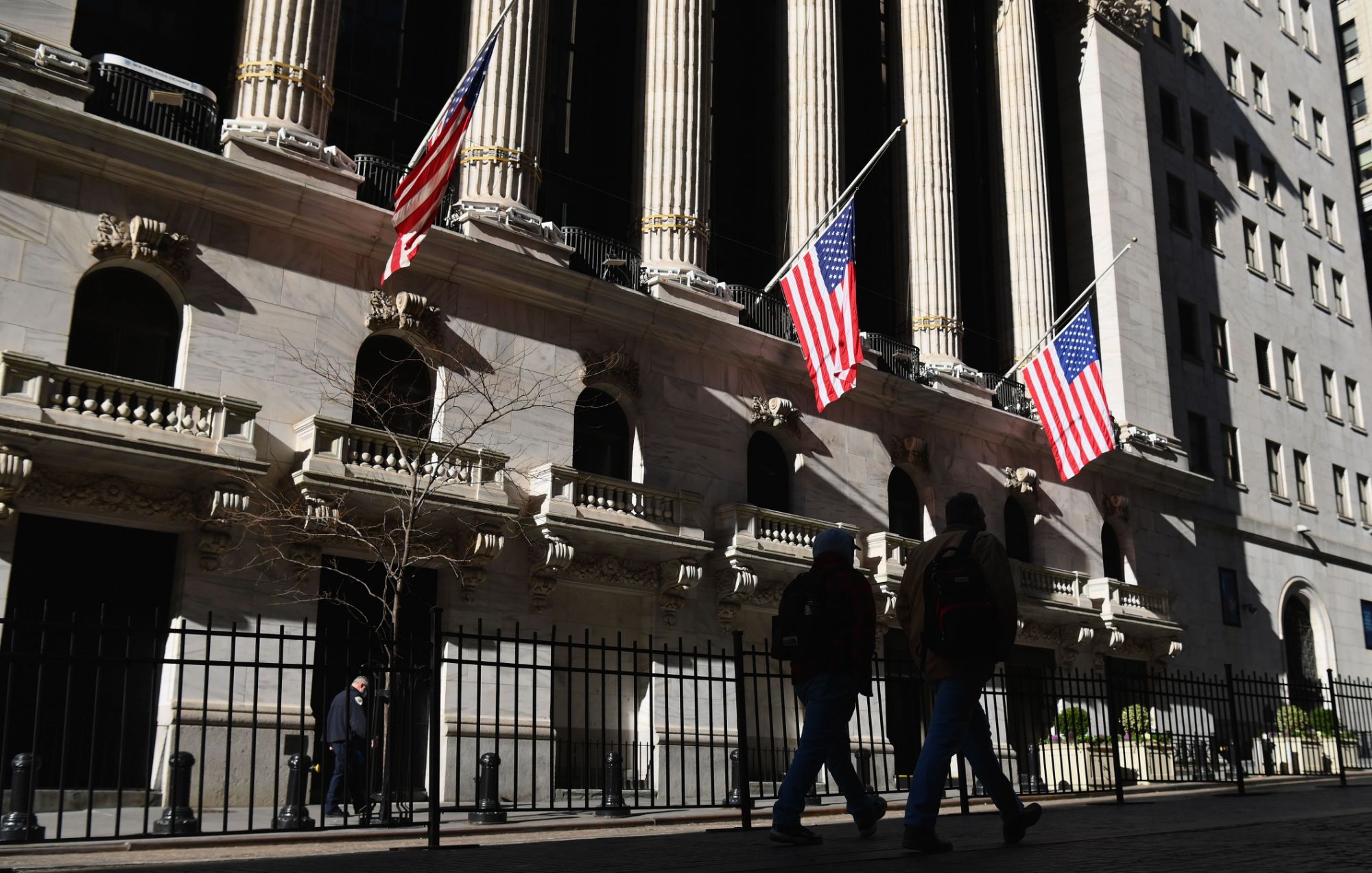 The S&P 500 and Dow traded lower Friday, extending declines from a day earlier. Both the Dow and Nasdaq hit record intraday highs Thursday before closing lower.

Late Thursday, Biden outlined his $1.9 trillion coronavirus relief proposal, which included a host of additional relief measures to add to the provisions included in the $900 billion package Congress passed in December.

Biden’s proposal, designated the American Rescue Plan, seeks to offer stimulus payments of $1,400 to most Americans, increase enhanced federal unemployment benefits by $100 to $400 per week and extend these through the end of September, and provide $350 billion in aid to state and local governments, which had been excluded from Congress’s latest package. It also seeks to raise the minimum wage to $15 per hour and provide additional funds to schools and to ramp up COVID-19 testing and vaccination, among other provisions.

The overall size of the package was largely in line with what investors had been anticipating from the proposal, and would be rivaled only by the $2.2 trillion relief from the CARES Act last spring. Whether or not the package will actually get advanced in the near-term is the next key question for markets, some pundits noted.

“We’ve got to distinguish between willingness and ability. I have no doubt in my mind that the incoming Biden administration wants to go big. They want to go big on relief, they want to go big on infrastructure, they want to go big on local and state government, and for good reason,” Mohamed El-Erian, president of Queens College at Cambridge University and chief economic adviser to Allianz, told Yahoo Finance on Thursday. “But they have a razor thin majority in Congress, razor thin in the Senate. And getting that through is not going to be easy. Add to that, there’s questions about the impeachment process, there’s questions about nominations, there’s COVID.

“So the market, I think, has priced in a big package. That is consistent with what the Biden administration wants to do. The question that the market is going to have to cope with is, is it able to do so given what else the Senate has to look at in the next few weeks and months,” he added.

Still, support to financial markets and the economy has come from multiple fronts during the pandemic, and many members of the Federal Reserve, for their part, have recently doubled down on their commitment to keeping crisis-era policies in place for the time being. Fed Chair Jerome Powell said during a webinar on Thursday that he believed the U.S. economy was still “far from our goals,”and that “now is not the time to be talking about exit” when it came to considering the Fed’s thinking around its massive, pandemic-era asset-purchase program.

The IRS said in an announcement Friday that the 2020 tax-filing season would begin February 12, marking a delay from the usual late-January start to the season. The agency said it would require additional time to do additional programming work amid the latest COVID-19 relief payments.

“This programming work is critical to ensuring IRS systems run smoothly. If filing season were opened without the correct programming in place, then there could be a delay in issuing refunds to taxpayers,” the IRS said in a statement. “These changes ensure that eligible people will receive any remaining stimulus money as a Recovery Rebate Credit when they file their 2020 tax return.”

The IRS expects more than 150 million tax returns to be filed this year, with most taking place before the April 15 deadline.

The cyclical energy, financials and industrials sectors lagged in the S&P 500 on Friday, giving back some of their recent advances amid bets on a strong post-virus economic recovery. Dow Inc. (DOW) and Chevron (CVX) underperformed in the Dow. The 30-stock index shed 0.5%, or 150 points, around noon in New York.

The real estate, utilities, communication services and health-care sectors remained in positive territory in the S&P 500 intraday on Friday.

Consumer sentiment dropped further than expected in January, as concerns over rising COVID-19 cases political turmoil were only partially offset by hopes for the coronavirus vaccine roll-out and supportive policies under the incoming Biden administration.

“Two offsetting shifts helped narrow the January loss in sentiment: the COVID-19 vaccines and a partisan shift in expectations due to the anticipated impact of Biden’s economic policies,” Richard Curtin, chief economist for the University of Michigan’s Survey of Consumers, said in a statement. “Importantly, covid’s threats to physical and mental health were seen in January as more important than its financial repercussions.”

“The most critical task for Biden is to not only accomplish his promised vaccination of 100 million in his first 100 days, but to accelerate on that pace for the balance of the population,” he added.

The disappointing December retail sales report, which showed a surprise third straight month of declines, underscores the ongoing pain the economy is enduring amid the pandemic. And fiscal stimulus, while offering some support to businesses and individuals, will likely not be enough to completely offset weakening economic trends at the beginning of this year, according to some economists.

“The further slump in retail sales in December confirms that the continued surge in coronavirus infections is now weighing heavily on the economy and illustrates that, despite the building optimism over fiscal stimulus, the next few months are still likely to be difficult,” Andrew Hunter, senior U.S. economist for Capital Economics, said in a note Friday.

“The economic hit from the current wave of virus cases won’t be nearly as large as that seen last spring, but GDP growth is likely to have been muted in the fourth quarter and looks set to slow further – albeit remaining in positive territory – in the first quarter too, even when we allow for the $600 stimulus checks, which could be raised to $2,000,” he said.

The Bureau of Labor Statistics’ monthly producer price index (PPI) increased just 0.3% in December after a 0.1% rise in November, missing expectations for a 0.4% monthly rise, according to Bloomberg consensus data.

A 0.1% drop in prices for final demand services weighed on the index, while goods prices increased 1.1% during December for the largest rise since May. Much of that increase came, in turn, from a jump in prices for energy, which firmed at the end of the year. Excluding more volatile food and energy prices, the PPI rose just 0.1% month-over-month and 1.2% year-over-year, with both coming in slower than anticipated.

U.S. retail sales unexpectedly dropped in December as consumer spending lost steam during the final months of the year.

The total value of retail sales dropped 0.7% in December from November after a downwardly revised 1.4% drop in November, the Commerce Department said Friday. Still, retail sales were up 2.9% year-over-year.

Electronics and appliance store sales also fell sharply, dropping 4.9% during the month. Food services and drinking places saw sales down another 4.5%, extending a stretch of weakness amid tougher lockdown restrictions.

Earnings totaled $3.79 per share, growing from the $2.57 the company reported in the same period last year, and beating the $2.62 consensus analysts expected, according to Bloomberg data. Adjusted revenue of about $30.2 billion grew 3% over last year, and was driven by a 15% jump in fixed-income trading revenue and 32% surge in equities sales and trading revenue. Investment banking revenue increased 37% to more than $2 billion.

JPMorgan’s profits during the quarter also benefited from a release of reserves for credit losses, with virtually all the big banks last year having set aside additional capital to brace for potential customer defaults.

“While we reported record profits of $12.1 billion, we do not consider the reserve takedown of $2.9 billion to represent core or recurring profits,” CEO Jamie Dimon said in a statement. “While positive vaccine and stimulus developments contributed to these reserve releases this quarter, our credit reserves of over $30 billion continue to reflect significant near-term economic uncertainty and will allow us to withstand an economic environment far worse than the current base forecasts by most economists.”