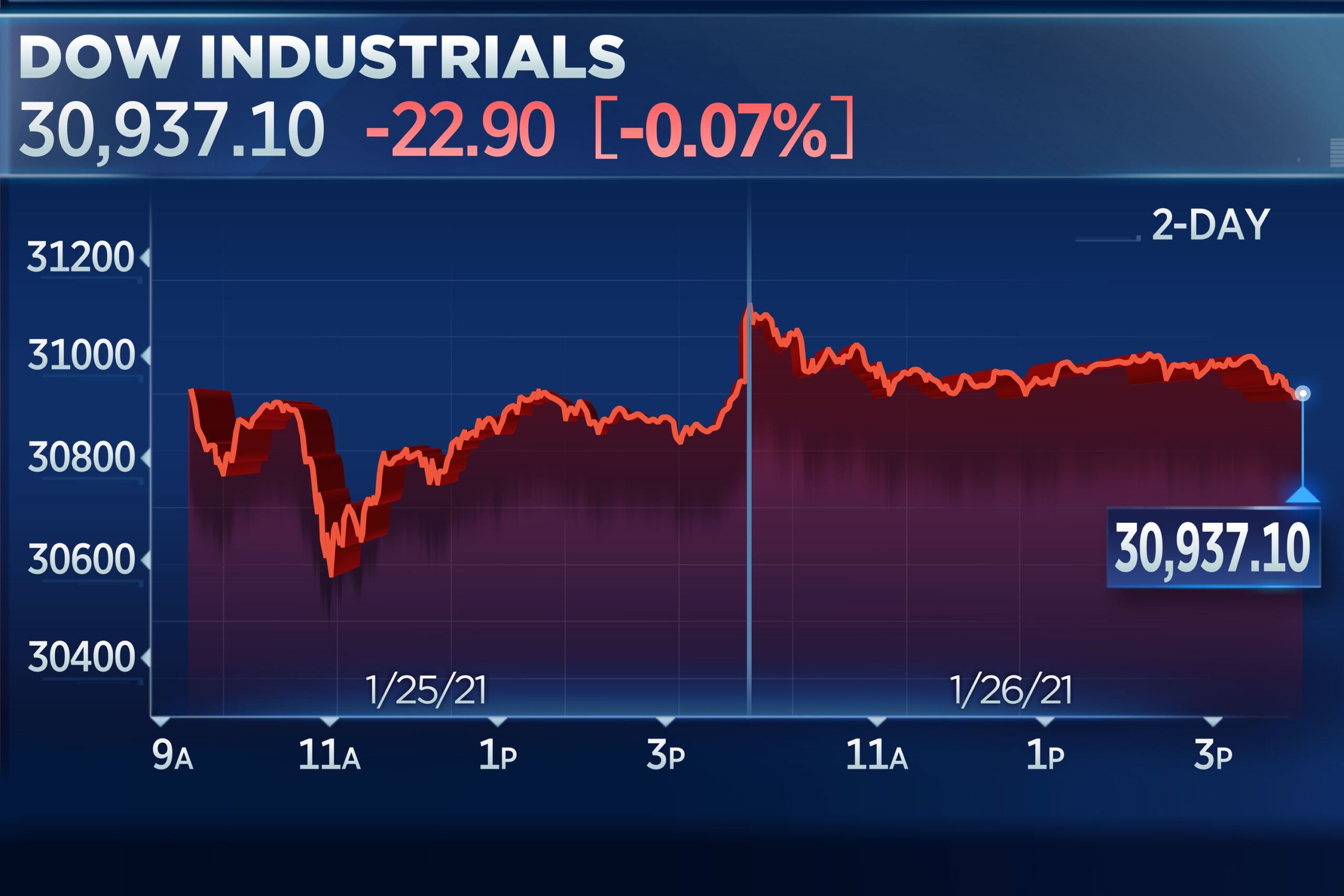 The S&P 500 slipped slightly from a record high on Tuesday as Wall Street geared up for the heart of corporate earnings season including reports from a slew of blue-chip companies and major tech players.

General Electric shares jumped 2.7% on its better-than-expected industrial free cash flow for the fourth quarter and a rosy outlook for the year. Johnson & Johnson popped more than 2% after the drugmaker’s earnings topped expectations. 3M also jumped 3.3% after strong results.

Tech giant Microsoft will announce its fiscal second-quarter earnings after the bell. Shares of Microsoft climbed more than 1%. Apple, Facebook, Caterpillar and Tesla are all set to report later this week.

Wild swings resumed in heavily shorted stocks, including GameStop and AMC Entertainment, as enthusiastic retail investors active in chat rooms continued to bet against short-selling hedge funds. The volatility has some investors concerned about stocks becoming detached from fundamentals as speculation runs rampant.

“The short squeeze/volatility we saw in heavily-shorted stocks such as GameStop and others only further confirms that, at least in the near term, complacent/frothy investor sentiment is the biggest near-term risk to stocks,” Tom Essaye, founder of Sevens Report, said in a note Tuesday.

GameStop popped another 92.7% at a record on Tuesday. AMC gained more than 12%.

Companies started the earnings season with a high beat rate. Of the S&P 500 components that have already reported earnings, over 70% have topped Wall Street’s expectations on both sales and earnings, according to data from Bank of America.

The Biden administration signaled Tuesday that it could be open to tweaking eligibility for future stimulus checks. President Joe Biden’s $1.9 trillion proposal calls for $1,400 direct deposits, but the plan has drawn critiques from a bipartisan group of lawmakers because of its lofty price tag.

Coronavirus cases have topped more than 100 million worldwide in just about 13 months as mutations add to the spread. Moderna said Monday that its vaccine does provide some protection against a variant found in South Africa, while officials in Minnesota reported the first U.S. confirmed case of a strain found in Brazil.

Investors were also waiting for a new policy statement from the Federal Reserve as the central bank began its two-day meeting on Tuesday.