Storm dumps snow and ice on East Coast, shutting schools and virus testing in US 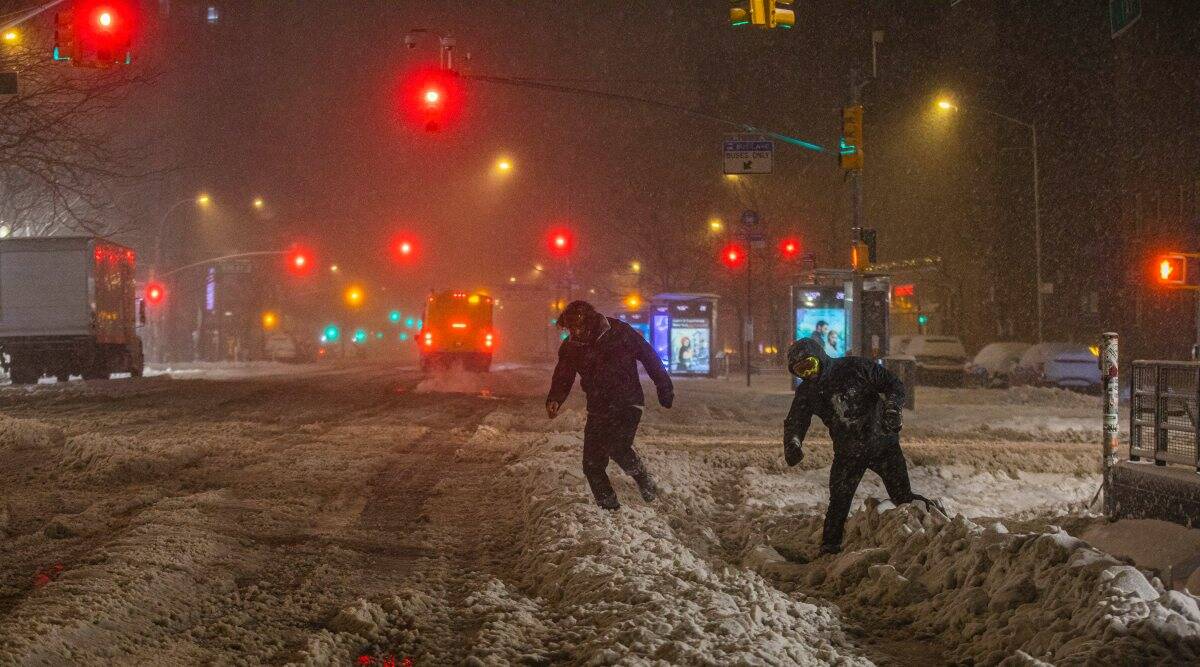 The first major winter storm of the season made its way up the East Coast on Wednesday, heading for New England after dumping rain, ice and snow from Virginia through New York — and like everything in 2020, it was made more complicated by the coronavirus pandemic.

At least three people were killed in car crashes, and hospitals in the storm’s path, already struggling with overloaded intensive care units and emergency departments from COVID-19 hospitalizations, delayed elective surgeries to encourage people to stay home and to keep beds available.

The storm also threatened the timely delivery of a coronavirus vaccine, just as the first inoculations of health care workers began this week. St. Luke’s University Health Network, which operates 12 hospitals in Pennsylvania and New Jersey, expected to receive its first vaccine delivery Thursday, but a spokesman said there was a possibility it would be delayed by the storm.

Several major cities, including Hartford, Connecticut, and Baltimore, temporarily shut down coronavirus testing sites in anticipation of heavy snow and wind. And in some cities, including Syracuse, New York, officials were dealing with less snow removal money than normal, after their budgets were decimated by the economic effects of the pandemic.

While there are still resources to plow the roads, a program to shovel sidewalks fell victim to budget cuts, Mayor Ben Walsh of Syracuse said.

Even the usual headaches of flight delays — hundreds of flights were canceled Wednesday — came with new worries because of the virus.

Chloe Cho, 22, was supposed to fly home from Boston to Chicago on Thursday, but the storm caused her to delay her trip an extra day.

“I am not thrilled,” she said. “I usually don’t mind waiting in airports, but now I’m scared because of COVID that I’m going to have to sit around and wait for my flight due to the storm.”

Snow swirled heavily in Philadelphia on Wednesday afternoon, causing near whiteout conditions, and thick, wet flakes fell in Washington. By midafternoon, snow also began to fall in New York City, where forecasters predicted up to a foot of accumulation — more than the city received all of last winter.

The messy weather caused a slew of highway crashes. Virginia State Police responded to at least 200 crashes by midafternoon, including one fatal single-car crash, and dozens of cars collided in a pileup in Clinton County, Pennsylvania, that resulted in two deaths. Maryland State Police had responded to nearly 500 calls for service, including 161 crashes, by midafternoon.

The Pennsylvania National Guard reported that it had about 80 Guard members and dozens of vehicles on standby to provide support.

The heaviest snow was expected overnight, especially around central Pennsylvania and southern New England. Philadelphia was expecting 4 to 8 inches of snow, and residents farther north — in northern New Jersey, Rhode Island and Massachusetts — could expect up to 1 foot before the storm dies down Thursday afternoon.

As the storm began Wednesday, roads along the Interstate 95 corridor were treated with salt, and Gov. Phil Murphy of New Jersey declared a state of emergency.

While hundreds of school districts announced that they would close Wednesday and Thursday, others found online learning to be the perfect substitute for a snow day, disappointing students who had hoped for a day off. New York City’s school system, the nation’s largest, told students they would be expected to show up online.

“I know we all grew up with the excitement of snow days, but this year is different,” Mayor Bill de Blasio wrote on Twitter. Children need the steady instruction to make up for the interruptions to schooling caused by the pandemic, he said.

Some parents decided to keep to the snow day tradition anyway, hoping to give children a sense of normalcy. Sarah Allen, a parent in the Kensington neighborhood of Brooklyn, New York, said if streets near her home were coated with snow this week, her four children would not be attending remote classes.

“I felt like no matter what kind of learning we’re doing this year,” she said, “this isn’t something that needs to be taken away from kids who have already lost a lot, ranging from not being able to see friends to losing parents to COVID.”

Even as state and municipal officials were issuing stern storm warnings, some greeted the weather with joy. For Lucas Whiffen, 3, of Philadelphia, it would be the first big snowstorm of his life.

His mother, Gail Whiffen, picked him up Wednesday from day care, which had closed early in preparation for the storm. Whiffen lamented that her son’s new snow pants had not yet arrived, but Lucas was confident he had plenty of winter gear: “A jacket and mittens and a hat, shoes, boots,” he said, eagerly awaiting the snow in which to use them.

In Boston, Toni Baraga, 21, said the storm was a welcome beginning to a new season, marked as it may be by the coronavirus pandemic.

“It’s finally going to feel like it’s December, Christmas and the holidays,” she said.