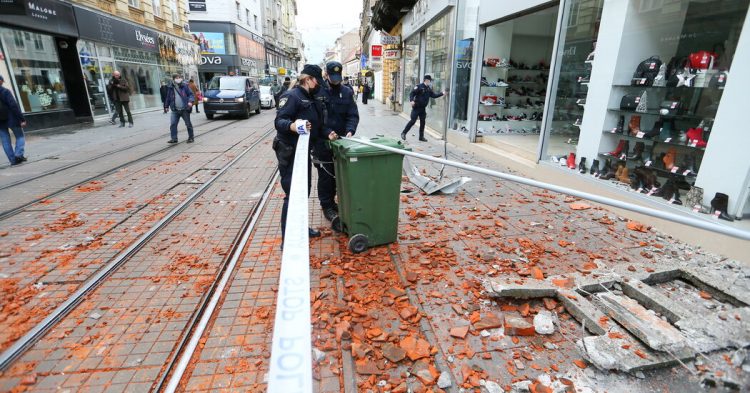 A powerful 6.4-magnitude earthquake struck central Croatia on Tuesday, according to the U.S. Geological Survey, with local rescue crews reporting widespread damage near the epicenter in the town of Petrinja and the surrounding area.

There was no immediate confirmation of casualties, but there were reports that the quake, which hit just after noon local time, could be felt across the Balkans and as far away as Hungary.

The mayor of Petrinja, Darinko Dumbovic, told the regional broadcaster N1 that “the city was destroyed and that at least one person had been killed, a 12-year-old girl, whose body he said he walked by on the street.

“This is a catastrophe,” he said. “My city is completely destroyed.”

“We need firefighters, we don’t know what’s under the surfaces, a roof fell on a car, we need help,” he said in an emotional telephone interview from the scene that was broadcast on Croatian state television.

“Mothers are crying for their children,” he said.

Images from the scene on social media and local television stations showed streets strewn with rubble, buildings with roofs caved in and rescue crews rushing through the streets. In one scene captured by local television crews, a man and a child were pulled from a car buried under debris and rushed to the hospital.

The mayor told local reporters that he did not know the condition of the two people.

“I also heard that the kindergarten collapsed,” he said. “But fortunately there were no children” in the building at the time, he said.

Petrinja is about 30 miles southeast of Zagreb, the capital, where buildings were rocked and debris from broken windows and damaged structures littered the streets.

The Red Cross in Croatia said it was a “very serious” situation.

It was the second earthquake to strike the area in the past day, after a 5.2-magnitude tremor Monday morning damaged buildings and stoked fears in a region with a history of seismic activity.

It came only hours after Prime Minister Andrej Plenkovic and President Zoran Milanovic toured the center of Petrinja to survey damage from the first quake.

While that first tremor caused no injuries, Mayor Dumbovic said that many buildings had been damaged, putting them in a precarious condition when the second quake struck.

He said that there had been several small earthquakes in recent days and that many residents were afraid to spend the night in their houses.

Ursula von der Leyen, the president of the European Commission, said she had asked Janez Lenarcic, the European commissioner for crisis management, to stand ready to travel to Croatia to provide assistance.

The region is prone to earthquakes, and experts have warned that the Balkan nations in southeastern Europe have failed to address the risks posed by aging buildings.

While many of the towns and villages trace their roots back hundreds of years, a building boom that took place in the 1990s, during the transition to capitalism from Communism, often saw structures built without regard to safety standards.

The result is that millions of people live in homes unlikely to survive a major earthquake, experts say.

In Croatia, the scars of past quakes are still visible in places like Dubrovnik, where nearly a third of the city was leveled in 1667 and more than 5,000 people died.