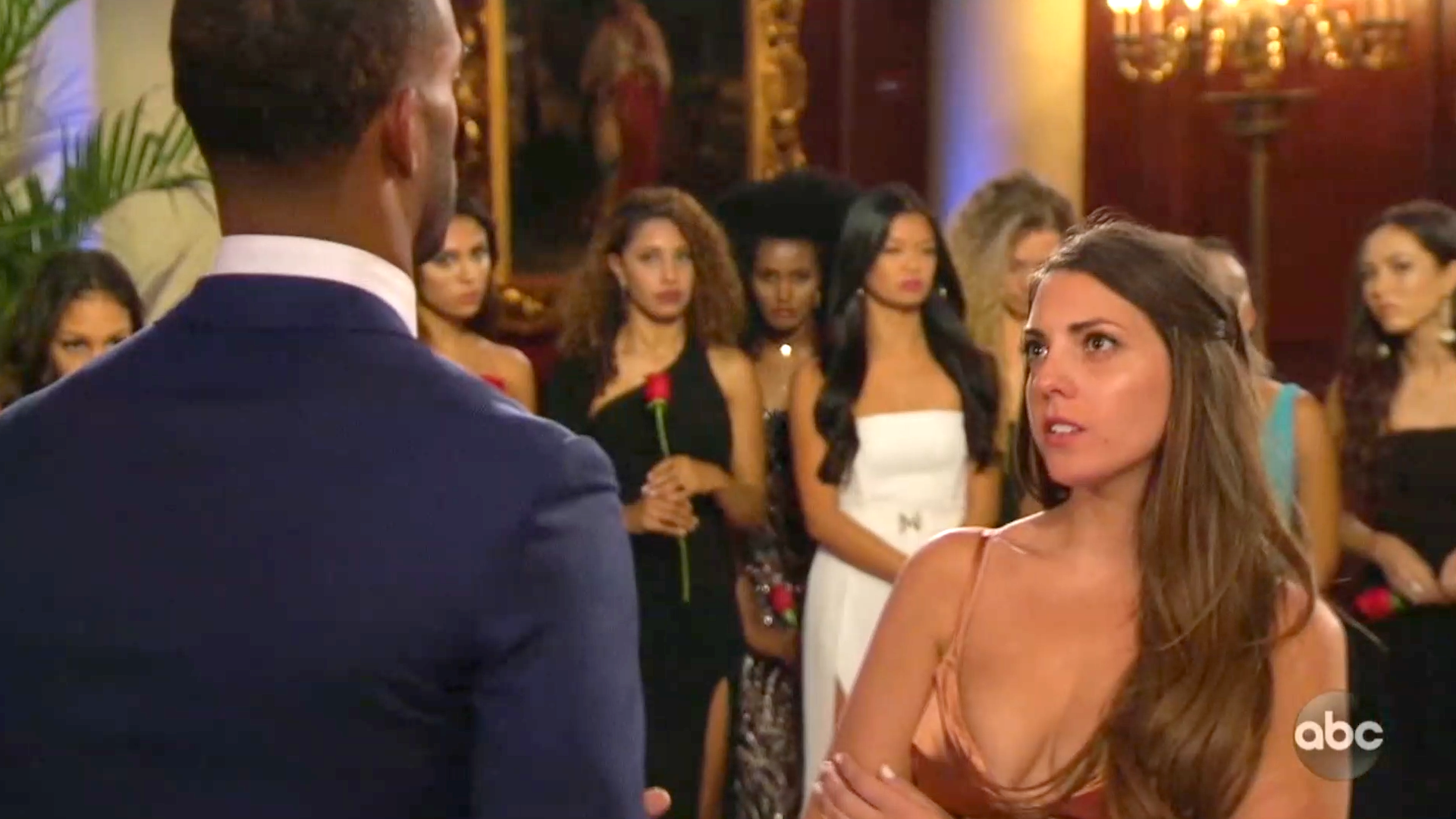 On The Bachelor Monday night, Matt James made it clear that he does not stand for bullying.

Following last week’s episode, in which fan-favorite Katie Thurston brought to Matt’s attention the “mob mentality” and toxicity within the house, Matt immediately took action. The Bachelor first took contestant Anna Redman aside to confront her about spreading the rumor that Brittany Galvin is an escort.

“Anna said something that was out of character, but the damage has been done. I’ve seen how words can affect people, and I owe it to these women to create a safe space for them, and that’s what I’m gonna do,” stated Matt after sending Anna home before the rose ceremony.

However, the biggest bully in the house has been this season’s “villain,” Victoria Larson. The self-proclaimed “Queen” has been behind almost all of the drama thus far, and has been dragged by viewers since day one for her delusion and for completely lacking self awareness.

“I hope I don’t get sent home for this,” said Victoria to an off-camera producer. “Literally, there’s no one in here he can marry besides me. Like, I’m literally the best option for him, and, like, I’m the only one with a working brain in this room, and I’m not even being rude. I’m being serious. If he’s gonna believe some idiot over me, he’s not my person, and, like, if that does happen, that’ll really suck, because that’s not the way I wanted to leave this situation, and, like, you know I’ll be so heartbroken, and I’m, like, trying to be positive, but, like, if that happens, I’ll literally die.”

During the rose ceremony, Victoria stated, “I’m not malicious. I have a good heart. Does Matt really want a wife that’s constantly creating drama? Or does he want a wife like me?”

Bachelor Nation was absolutely thrilled when Matt did not give Victoria a rose during the ceremony and instead sent her home.

This is the best episode so far. So happy that Matt is taking care of this house. That was exactly what I needed to see #TheBachelor #bachelorabc

“I honestly feel so sorry for you that you would listen to hearsay and not all of the facts behind a situation. So goodbye,” Victoria told Matt as the two awkwardly stared at each other for an uncomfortable amount of time.

Later, Victoria shared in her exit interview, “You think I’m gonna go hug him goodbye? No. And he just stared at me. Like, how dare you? He is not my king, and I am still a queen. Matt is a jester. The fact that, like, he chose Katie over me, ugh. Yeah, Matt, I feel sorry for you with your choices. I would be very surprised if the girls are, like, okay that I left. The whole house is gonna feel like s*** that I’m gone. Like, I brought so many people joy. Whatever. Matt’s not the guy for me. I’m never dating another Matt as long as I live. Ever. I hate that name now.”

The eliminations didn’t stop there. On top of Matt cleaning house with Anna and Victoria, MJ Snyder’s fate also remains in question after Matt found out she had coined the term “Varsity” vs. “J.V.” in reference to the original contestants and the new girls. But we’ll have to wait until next week’s episode to find out if she fesses up to it.

The Bachelor airs Mondays at 8 p.m. on ABC.

Watch Katie Thurston being praised for standing up to bullying from other women on ‘The Bachelor’: