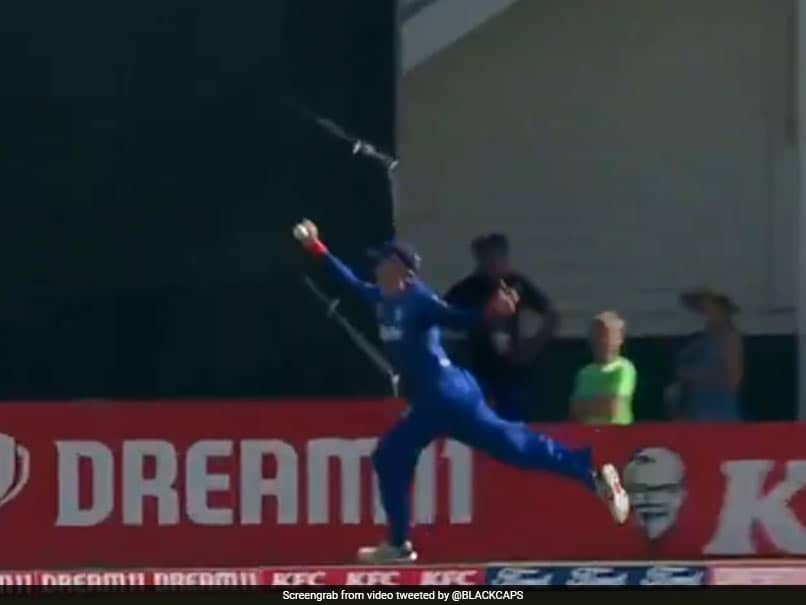 Martin Guptill took a one-handed juggling catch at the boundary even as he stumbled off his feet.© Blackcaps/Twitter


Martin Guptill pulled off a remarkable catch on Saturday in a Super Smash game for Auckland Aces against Central Districts at Eden Park in Auckland. Central Districts were set 200 to chase by Auckland and in the fourth over of the second innings, George Worker, the Central Districts opener, hit Louis Delport over his head towards long-on. Guptill, stationed at the boundary, ran across and took a remarkable one-handed catch after having juggled the ball once even as he had been teetering off his feet.

Just in case you missed it on Saturday, start your Sunday with this OUTSTANDING juggling catch from @Martyguptill in the Dream11 @SuperSmashNZ for @aucklandcricket‘s Aces. Catch today’s Super Smash action from the @BasinReserve on @sparknzsport #SuperSmashNZ pic.twitter.com/TDesZteDg7

That wicket was the second to fall for Central Districts as they were eventually restricted to 182 for 7 and lost by 17 runs.

For Auckland, Mark Chapman hit 73 runs off just 34 balls while Robert O’Donnell chipped in with 61 off 34.

Guptill wasn’t at his fluent best with the bat as he scored 29 off 31 balls.

However, the team total of 199 for 6 was enough for the hosts as Central Districts were hampered by two run outs – Ross Taylor and Josh Clarkson – and despite skipper Tom Bruce’s 52 off 35, fell short of the target.

Despite the win, Auckland languish at the bottom of the points table with four points from seven games even as Central Districts sit pretty in second spot with 20 points from eight matches.

He is New Zealand’s highest scorer in the shortest format of the game in international cricket.