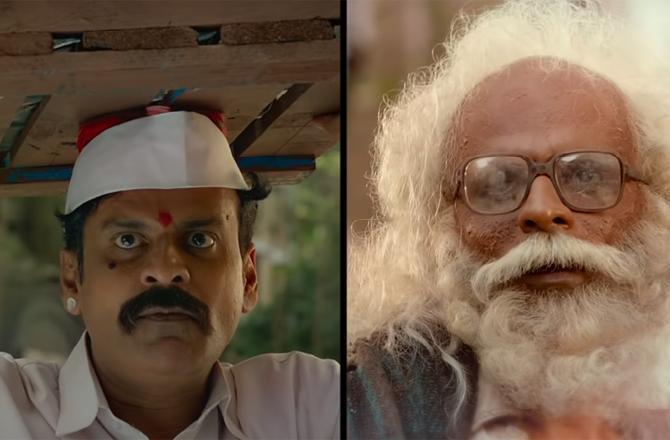 There has to be something about actors opting for tricky parts that challenge their oeuvre. A week back, we saw Akshay Kumar in the role of a ghost-buster possessed by the spirit of a transgender in the horror-comedy, Laxmii. Ever since fans saw him dressed in a red sari with bangles and bindis, they were in awe. The fact that it turned out to be a colossal mess of a film is another matter.

We now get Manoj Bajpayee as a detective-in-disguise to expose men on the verge of the marriage of their philander and debauchery in this week’s Suraj Pe Mangal Bhari. But director Abhishek Sharma keeps the gaze of the narrative in the hands of Diljit Dosanjh. For the viewers, he’s the victim (Suraj) and Bajpayee is the venom (Mangal). He uses his ‘Aiyaary’ (mastery of disguise), no pun intended, to save women from promiscuous men.

It’s a comedy where two men will stop at nothing to defeat the other, where their attempts to overpower the nemesis are both futile and frustrating. Right from the David Dhawan comedy Deewana Mastana to Milan Luthria’s Taxi No. 9211, two men pitted against one another for both love and self-conceit is now a genre that’s begun to reek of staleness. Suraj Pe Mangal Bhari showcases one of the coldest romances of recent times, with tired lines and tedious songs.

Although based in the year 1995, when Bombay was on the verge of becoming Mumbai, we rarely buy into the detailing. In a scene, Dosanjh and his friend are watching Phool Aur Kaante on Zee Cinema with the channel’s new logo, and in another scene, Bajpayee is playing wrestling cards with his colony’s children with the Wrestlemania 35 logo that aired last year. Attention to detail is clearly not the film’s strength.

Dosanjh’s lovely and lively presence is overpowered and overshadowed by filmmakers’ obsession to cast him as an over-enthusiastic Punjabi boy with his foot permanently in his mouth. After the awful Arjun Patiala and the amusing Good Newwz, it may be hard for people in the industry to go beyond the loutish persona of an actor capable and deserving of so much more. Maybe they should revisit the remarkable restraint he displayed in Udta Punjab and Phillauri.

Bajpayee’s performances have more often than not done more for the film than they did for them, and this one is sadly no exception. We are supposed to laud his un-inhibitions and the idea to go all bonkers in a film that rarely justifies his incredible talent, unfortunately, the uninspired writing comes in the way. Supriya Pilgaonkar, only two years elder than Bajpayee, plays his mother and it’s hard to buy this casting blunder. Although there’s a scene where she says people think she’s his younger sister, only to redeem this misfire.

At best, Vijay Raaz as the man with the fetish for perfection raises a few laughs with his deadpan demeanour, like he has been in his career. His entry happens by the time the film has already dwindled and sunk into the heaps of boredom. It’s a shame that an ensemble of dependable and dazzling actors came together for a film this dull. A film with Suraj in its name should be anything but dull.

RELATED:  Movie Review: 'The Girl on the Train' (Netflix)