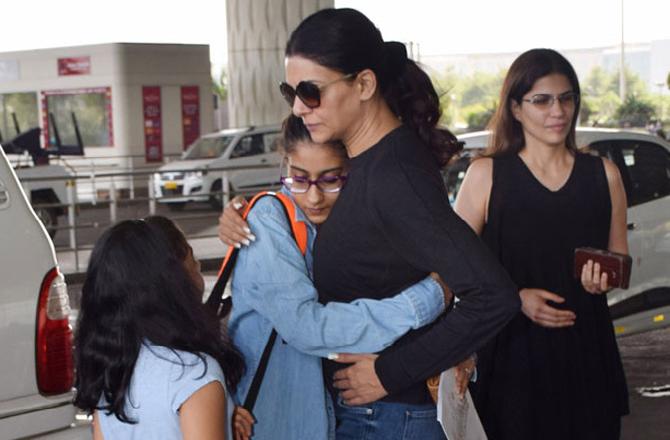 Sushmita Sen’s daughter Renee’s Instagram account was hacked over the weekend by ‘some idiot,’ and the actress has shared the news on social media. She also addressed how she feels bad for the person who hacked her daughter’s profile, and does not realise that Renee is happy to begin anew. As she updated her fans and social media followers, Sushmita Sen also insisted on spreading love and happiness through her post. Take a look!

Renee is not the first star kid who’s profile has been hacked. There are many such instances of a lot of Bollywood celebrities who have faced the brunt of the hackers. A few months ago, Sussanne Khan’s Instagram account was also hacked through a fake e-mail ID. Actresses like Esha Gupta, Pooja Hegde, director Shoojit Sircar too went through the same trauma.

On the other hand, speaking about Sushmita Sen’s professional commitments, the actress made her digital debut with Aarya, a web show which is an official adaptation of the popular Dutch crime drama Penoza.

Aarya delves into how organised crime and betrayal runs deep in a family. It is about the protagonist Aarya, and how she is pulled into the narcotics business when her family is threatened. The Hotstar Specials show also features Sikander Kher, Namit Das, Jayant Kripalani, Sohaila Kapoor, Sugandha Garg, Maya Sareen, Vishwajeet Pradhan and Manish Chaudhary.

In fact, the makers have already kickstarted prepping up for its second instalment. A source, in an interview with mid-day, shared, “In the last season, it was seen that after wiping out her rivals in the drugs business, Sushmita’s character Aarya heads to New Zealand with her family. The directors plan to shoot the indoor scenes in Dubai over a two-month schedule. The production team had conducted the necessary recces virtually over the past few months. With a large chunk of the series shot before the year-end, a 20-day schedule will be conducted in the first half of 2021 to complete the outdoor shots.”