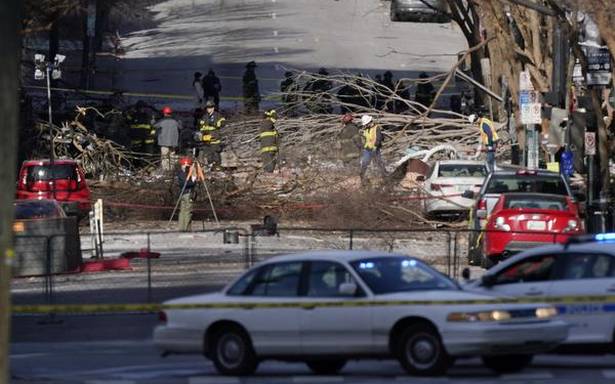 Investigators used DNA and other evidence to link the man to the explosion, they say

The man believed to be responsible for the Christmas Day bombing that tore through downtown Nashville blew himself up in the explosion, and appears to have acted alone, federal officials said.

Investigators used DNA and other evidence to link the man, identified as Anthony Quinn Warner, to the mysterious explosion but said they have not determined a motive.

The officials have received hundreds of tips and leads, but have concluded that no one other than Warner is believed to have been involved in the early morning explosion that damaged dozens of buildings.

“We’re still following leads, but right now there is no indication that any other persons were involved,” Douglas Korneski, special agent in charge of the FBI’s Memphis field office, said on Sunday.

In publicly identifying the suspect and his fate, officials disclosed a major breakthrough in their investigation even as they acknowledged the lingering mystery behind the explosion, which took place on a holiday morning well before downtown streets were bustling with activity and was accompanied by a recorded announcement warning anyone nearby that a bomb would soon detonate.

No motive was disclosed by investigators nor was it revealed why Warner had selected the particular location for the bombing, which damaged an AT&T building and has continued to wreak havoc on cellphone service and police and hospital communications in several Southern states as the company worked to restore service.

Warner, who public records show had experience with electronics and alarms and who had also worked as a computer consultant for a Nashville realtor, had been linked to the bombing since at least Saturday when federal and local investigators converged on a home in suburban Nashville linked to him.

Federal agents could be seen looking around the property, searching the home and the backyard.

A Google Maps image captured in May 2019 had shown an RV similar to the one that exploded parked in the backyard, but it was not at the property on Saturday, according to an Associated Press reporter at the scene.

On Sunday morning, police formally named Warner as being under investigation.

The officials said their identification of Warner involved several key pieces of evidence, including DNA found at the explosion site.

Investigators from the Tennessee Highway Patrol also recovered parts from the recreational vehicle where the bomb was detonated among the wreckage from the blast, and were able to link the vehicle identification number to an RV that was registered to Warner, they said.