Sutapa Sikdar remembers Irrfan Khan with an emotional post, writes ‘No idea how to welcome 2021’ 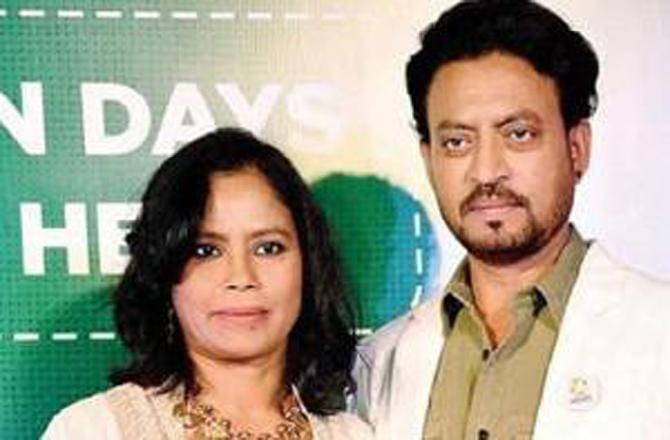 Irrfan Khan passed away on April 29, 2020. The actor had been undergoing treatment for Neuroendocrine cancer and passed away after complications arising out of colon infection. The actor is survived by his wife, writer Sutapa Sikdar and two sons Babil and Ayan.

And as the world entered into a new year, 2021, the actor’s wife remembered him by sharing an emotional and heartbreaking post on how she misses him. Sharing a collage of his pictures, this is what she wrote- “It’s so difficult to wish 2020 as the worst year as you were still there.last year this day next to me,gardening, busy building birds house how can I say goodbye to 2020!!Irrfan I have no idea how to welcome 2021!! [sic]”

Irrfan Khan‘s was an unconventional aura yet very charming. He hailed from Jaipur, stayed at Tonk Road and had dreams of making it in Bollywood. The nation saw him for the first time in the immensely successful serial, Chanakya, and his eyes were so gripping and powerful, the viewers couldn’t help but be hooked by his persona. He was here to stay.

His early years in Hindi films may have been unsensational but never once anyone doubted his tenacity as an artist. Even in smaller roles like Kasoor and Footpath, you could see the sincerity and earnestness with which he approached these characters. There was something special about his emotions and gravitas that with the same amount of expressions, he could be both chilling and comical. On one hand, we had a film like Gunaah, where he played an inebriated and innocuous police officer, and on the other hand was a film like Hindi Medium, where he made the audiences laugh and even cry.

He won the National Award for Paan Singh Tomar, a film that was driven by rust and robustness, and so was his performance as the eponymous character. It was only after this that he began to get roles that were not only exciting but also very exhilarating, for him and us, both. In The Lunchbox, he played Saajan, an ageing and ordinary man who falls in love with a woman he has never met, thanks to her delicious food that accidentally lands at his office desk. It was a restrained, real, and rousing performance that will always stay as delicious and fresh as the food he consumed.

Another crackling performance was in Shoojit Sircar’s Piku, where he was pretty much stuck between a clumsy father and his cantankerous daughter. His deadpan demeanour always works in favour of the films he’s a part of, and Piku was one of them. Call it the magic of the narrative or his own Midas touch that even if a single muscle doesn’t move on his face, we know exactly how and what he’s feeling. And that’s precisely what he aspired for, to be a great artist. He never craved for fame.