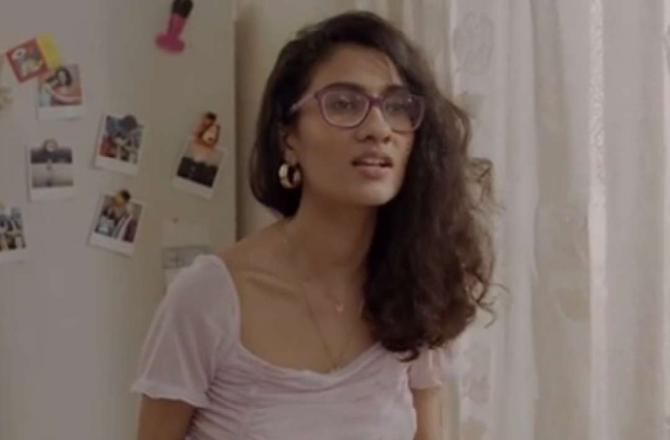 Sushmita Sen’s elder daughter, Renee Sen, has marked her debut with a short film. Titled Suttabaazi, Renee plays the lead role of Divya Kumar, a clandestine smoker at loggerheads with her parents during the lockdown.

The makers released the trailer of the short film on November 19. In the trailer, Renee tries her best to navigate her troubled lockdown life with her nagging parents and find opportunities to secretly smoke. Rahul Vohra and Komal Chhabria will essay the role of her parents. The short film is directed by Kabeer Khurana and produced by Simran Lakhanpal, Ramneek Sawhney, and Pankaj Rungta. The short film will release in December 2020.

Last month, Kabeer Khurana had shared some behind-the-scenes pictures on his Instagram handle. In the pictures, we can see Renee prepping for her role. Here’s a look at some of the prep sessions from the sets of Sen’s Suttabaazi:

Shooting for the short film began after the lockdown restrictions were lifted. The director had shared a picture with his star cast before the shoot.

Shooting for the short film was wrapped on October 4. Here’s a glimpse of the wrap-up party:

Renee, 21, is said to be a chip off the old block. For the unversed, Sushmita Sen had adopted Renee in 2000. She later adopted her second daughter, Alisah, in 2010. Speaking about adopting her two kids, Sush had said earlier in an interview, “In the (case of) natural birth, mother and child connect through the umbilical cord but in adoption, the mother and the child are connected by this higher power, a connection that you cannot cut off. I have had the privilege of experiencing it twice. To become a mother who has given birth from the heart. I have not missed a day of feeling the joy of motherhood.”

“The wisest decision I made at the age of 24 was to become a mother. It stabilised my life. People think it was a great act of charity and wonderful action but it was self-preservation. It was me protecting myself,” she added.

Talking about Sushmita Sen, the actress made a solid and stunning comeback with the web show Aarya earlier this year.

When asked how she wants to go forward in her career, Sushmita said, “The response to ‘Aarya’ has been overwhelmingly great. An entire team of fantastic people put this show together and we knew we were creating something magical with ‘Aarya’. However, even we could not fathom the kind of response it has received. It has been a really heart-warming journey.”

Also Read: Sushmita Sen on daughter Renee’s 21st birthday: What a journey this has been, shona!